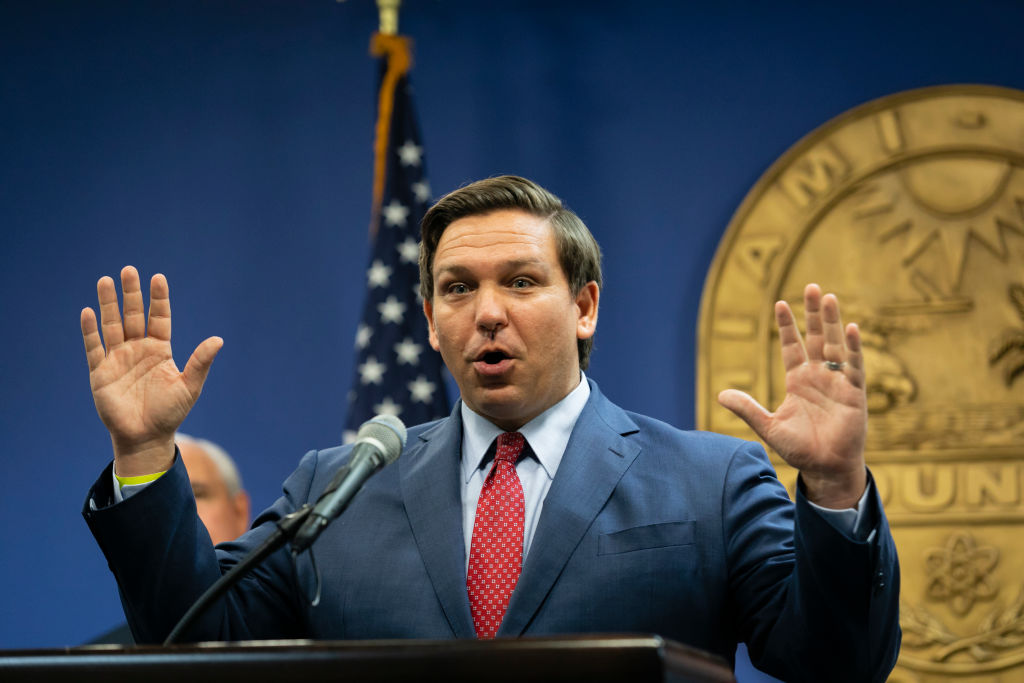 President Donald Trump’s weekend claim that he told officials in his administration to slow down coronavirus testing across the U.S. in order to avoid higher case totals led to a furious round of backpedaling by members of his staff, who said Trump was “obviously kidding” and that his words marked “a light moment for him” at a rally in Tulsa, Okla.

But as recent developments in Florida make clear, there is more than one way to suppress the kinds of numbers that reveal the virus’s true human cost – even as those numbers rise dramatically in states that have pushed aggressive reopening strategies.

Florida’s policy change on counting ICU patients comes just as the state is experiencing an explosion of new virus cases.

At the behest of Gov. Ron DeSantis, Florida late last week changed its guidelines for how hospitals count the patients in their intensive care units. Specifically, Scott Rivkees, the state’s surgeon general and secretary of the Department of Health, told hospital providers to stop reporting the number of adults who occupy ICU beds. Instead, Rivkees said, the hospitals were to report only those patients within the ICU who required what he called “intensive-level care.”

Rivkees’ logic was that many hospitals had located COVID-19 wards within ICUs, and therefore were reporting all the virus patients there as ICU patients. Although there is no evidence to suggest any of those patients shouldn’t be there, hospital administrators now apparently need to identify who among them is not actually receiving intensive care.

The policy change comes as Florida has experienced an explosion of new virus cases, weeks after DeSantis declared an aggressive reopening, and as several counties reported they were running low on ICU bed space. As of Tuesday, less than a quarter of the adult ICU beds across the state were available.

DeSantis last week doubled down on his reopening strategy — even as health experts warned that Florida was poised to become “the next large epicenter of coronavirus transmission.” Its recent surge in positive test results pushed Florida’s COVID-19 number above 100,000 on Monday.

“We’re not shutting down. We’re going to go forward…We’re not rolling back,” DeSantis said on Tuesday. “You have to have society function.”

The governor, a Trump ally who successfully pushed for Jacksonville to host the Republican National Convention after North Carolina officials expressed concern over health safety and a likely lack of physical distancing, initially blamed Florida’s spike in positive cases on a rise in testing. Under heavy criticism, he conceded over the weekend that more testing alone did not explain Florida’s wild spike in the numbers. But his position on reopening did not change.

If, as many health experts believe, the number of people hospitalized for coronavirus is a more reliable indicator of its scope than positive test totals, then California has reached a worrisome new milestone.

Monday’s updated figures showed California had a record 3,868 patients currently being treated for COVID-19 in its hospitals. It was the third straight day of such record numbers, all three of them breaking a mark of 3,497 that was set in April.

California’s reopening of businesses, albeit cautious, is a likely contributor to the increased recent totals of COVID victims.

According to National Public Radio, the number of COVID-19 patients in California hospitals held fairly steady for about a month before beginning to rise sharply in mid-June.

The state’s reopening of businesses, albeit cautious, is one likely contributor to the increased recent totals, as well as ongoing outbreaks of the virus in its nursing homes and skilled care facilities. Although some of the evidence is anecdotal, it also appears that many Californians have been less vigilant about protecting themselves and each other.

“Once things opened up, a lot of people started ignoring some of the social distancing protocols,” Stanislaus County spokesman Royjindar Singh told Cal Matters after that county went on the state’s watch list because of a spike in cases. “We’re having more exposure, so our case numbers have almost doubled, and with that our hospital numbers have also gone up.”

Hospital admissions are seen as a more reliable gauge of the virus’s impact than positive test results because the latter relies so heavily upon the availability and accessibility of the test itself, which is uneven at best.

What’s going on in Arizona’s jails? After a surge in cases in Maricopa County’s system, the American Civil Liberties Union is trying to find out.

Last week, the organization filed a federal lawsuit demanding the release of medically vulnerable inmates from Maricopa County’s jails. Those five jails had combined by that point to produce more positive cases of coronavirus (386) than the entire Arizona state prison system (252). (The county, which encompasses Phoenix, is the fourth largest in the U.S., with a population of roughly 4.5 million.)

The suit was filed two weeks after the ACLU sent county sheriff Paul Penzone a letter asking him to test everyone in his jails and make the results public. The organization alleges the sheriff has not taken adequate measures to prevent the spread of the virus in the jails. The sheriff’s office did not comment on the litigation, but noted that it has taken mitigation measures, and that the jail count has been thinned to about 4,500 from 7,100 in December.

“Once it’s in the jails, it is very difficult to stop,” ACLU attorney Jared Keenan said. Among the county jails, state prisons and immigrant detention centers in Arizona, more than 1,100 cases had been reported, according to the Associated Press.

Most Americans probably wouldn’t mind seeing the resumption of pro and college sports — and the hourly wage workers whose jobs rely on those sports’ arenas and stadiums being open would agree.

But in a trend that mirrors the county’s experience with COVID-19, the various leagues’ attempts at even limited reopenings have been disastrous.

Even loosely structured, widely spaced workouts for selected players at Major League Baseball facilities have backfired. MLB has seen at least 40 players and staff members test positive for the virus, according to USA Today, and training camps for all teams — both in Florida and Arizona — were shut down last week over concerns of a possible outbreak.

The National Basketball Association, meanwhile, announced plans to resume its season next month in semi-isolation, with teams reporting to Walt Disney World in Orlando to live on the campus and finish their schedules – but the recent surge of Florida cases has prompted concern among players and executives alike about the plan. And officials with the National Hockey League said they’d had 11 positive cases, after players were tested upon their return to team workouts. Several other players’ positive cases were not included in that total, Yahoo Sports reported.