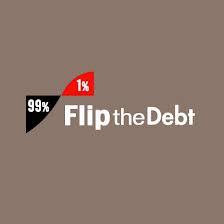 “Fix the Debt,” the CEO-led campaign promoting fear and what some have called near-hysteria over the national debt, has met its grassroots nemesis: “Flip the Debt.” While speaking at a Fix the Debt conference on Monday, Honeywell International Inc. CEO David Cote was interrupted several times by Flip the Debt protesters over tax loopholes that allow companies like Honeywell and General Electric to pay far less taxes than ordinary Americans.

“Fix the Debt claims to seek bipartisan solutions to reduce the deficit, but Fix the Debt is nothing more than a CEO lobby whose real objective is huge corporate tax breaks and drastic cuts in Social Security, Medicare and Medicaid. David Cote and his CEO friends receive a lot from government: In 2011, Honeywell received $725 million in government deals, making it the 35th largest federal contractor. However, Honeywell and other companies pay next to nothing in taxes. Honeywell’s tax rate from 2008-2011 was two percent. Does anyone in this room pay two percent?”

The crowd applauded, but Cote only laughed nervously.

Gan Golan, cofounder of Flip the Debt, laid out his group’s goals. “We will disrupt Fix the Debt meetings across the country to elevate our message that the biggest corporations in the country aren’t paying taxes, and now they want the rest of us to pay for it. Sustained public pressure against corporate tax dodgers in the UK has put the issue at the top of the agenda there, and we hope to do the same.”

Flip the Debt’s launch comes on the heels of legislation, introduced by Senator Bernie Sanders of Vermont, seeking to close corporate tax loopholes and raise nearly $600 billion over the next decade. Said Sanders, “Wall Street banks and big corporations love America when they want corporate welfare. But when it comes to paying taxes, they want nothing to do with this country.”

After police escorted the protesters out of the conference, at St. Anselm’s College in New Hampshire, Cote stated that “entitlements” like Social Security and Medicare are bankrupting the United States. Cote’s Honeywell retirement amounts to $78 million – enough to qualify for monthly retirement checks of $428,000 starting at age 65. By contrast, the average Social Security payment to retirees is $1,237 per month.

Charlie Balban, president of the Alliance for Retired Americans-New Hampshire, grilled Cote during a question-and-answer period. “We should do something about the debt, but we don’t need to cut programs that people depend on. Instead of reducing the deficit on the backs of working Americans, corporations should pay taxes like the rest of us.”

(This post first appeared on Truthout and is republished with permission.)