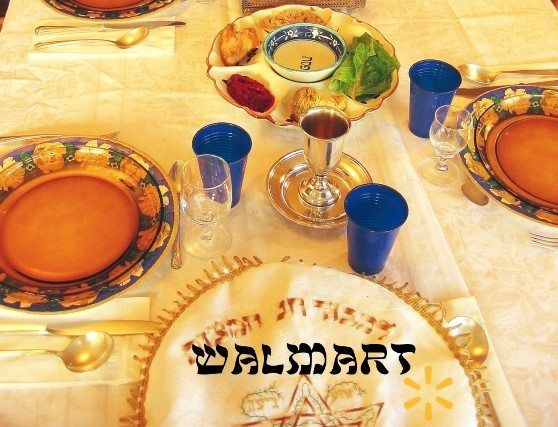 The world’s largest retailer may not be known for bar mitzvah catering, but apparently the matzah market was too lucrative to pass up. Visit walmart.com, and in less time than it took God to part the Red Sea, you can load up on all variety of matzah products, from matzah ball soup mix to matzah meal. Those looking to brush up on their Pesach basics can even find Celebrate Passover: With Matzah, Maror and Memories, a handy guide to the holiday published by that noted authority on Jewish customs, National Geographic (imagine the charoset photo spreads).

But before you get out your credit card, you might want to consider whether a matzah splurge at Walmart is really in the spirit of Passover. Here’s some unleavened food for thought:

Not to get all righteous, but there is something a little disconcerting about the idea of purchasing the bread of affliction at a company synonymous with dirt-poor wages and benefits. A couple of Passover-unfriendly facts about Walmart’s compensation practices:

Moses was not officially a labor leader, but you have to admit that the Passover story — people rising up against slavery and oppression — has a Norma Rae quality to it. Without going into the grim details, let’s just say there’s a reason why nary a single Walmart store is unionized in the United States — and it’s not the middle-class lifestyle offered by Walmart.

Did you grow up hearing stories about your zeyde’s family business? Maybe a bakery, like my Great Uncle Saul’s operation in New Jersey, or a general store, like my father’s father ran in Winnipeg? It’s a good thing Walmart wasn’t around back then, because chances are that bakery and store would have met the same fates that small businesses around the country face when Walmart comes to town. Just how bad is it? For every two jobs Walmart creates, three local jobs are lost. In one Chicago neighborhood where Walmart opened a superstore, within two years 82 businesses went as dark as Egypt after the plagues.

Even if you didn’t Occupy anything last fall, you might get a little worked up during those Haggadah passages that rail against the ancient version of income inequality (the wealth of the Pharoahs vs. the misery of their Jewish slaves, for instance). Well, the Walton family, Walmart’s largest shareholders, may not have invented modern-day economic inequality, but they certainly embody it: In 2007, six Waltons were worth $69.7 billion, an amount equal to the total wealth of the bottom 30 percent of American families. If you transpose the Waltons into the Passover narrative, it’s safe to say that they wouldn’t be the heroic underdogs.

5) Walmart and the Protocols of the Elders of Zion

Okay, this one’s for those among you who are still leaning toward a middle-of the-night Internet matza run at walmart.com. Seems that our friends at Walmart had no problem selling The Protocols of the Elders of Zion, the most notorious anti-Semitic tome this side of Mein Kampf, without so much as a mention of its scandalous origins. Indeed, Walmart all but validated the volume’s premise of the Jewish desire for world supremacy with this note that accompanied The Protocols on its  Web site: “If . . . The Protocols are genuine (which can never be proven conclusively), it might cause some of us to keep a wary eye on world affairs. We neither support nor deny its message. We simply make it available for those who wish a copy.” Only after denunciations from the Anti-Defamation League and the Simon Wiesenthal Center did Walmart remove the book from its site.

Leaves a bad taste in the mouth, doesn’t it? But don’t worry, we have just the thing: some Walmart-free matzah brie, like your bubbi used to make.

Walmart: A Portrait by the Numbers