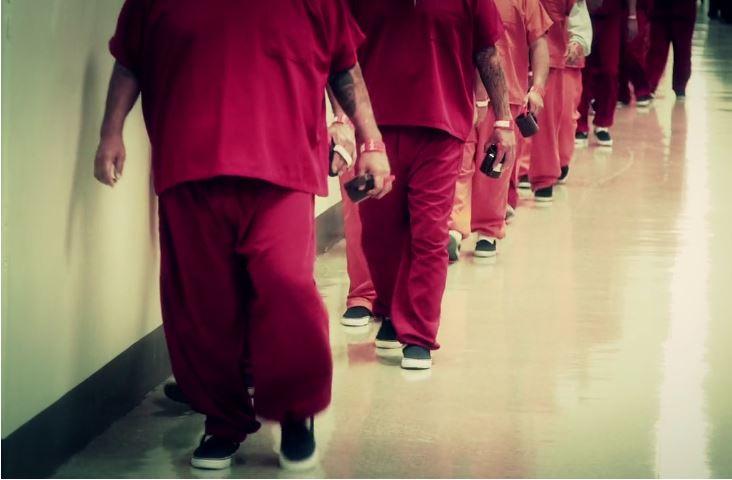 Late last March, Osmar Gonzalez Gadba, a 32-year old Nicaraguan immigrant, was found hanging by a bedsheet at the Immigration and Customs Enforcement’s Adelanto Detention Facility. About two weeks later, ICE reported that a second detainee, Sergio Alonso Lopez, 55, of Mexico, had died in a nearby hospital of internal bleeding – the fifth detainee death since Adelanto opened in August 2011, and the sixth fatality to occur in ICE custody so far this year. The California facility is run by the country’s number two for-profit prison company, the Florida-based Geo Group.

Now, a 41-year old woman detained at Adelanto tells Capital & Main that she has lost full use of her right arm and leg after suffering stroke-like symptoms, and alleges that her treatment has been poor.

The Geo Group’s stock has soared on news that the Trump administration plans to greatly expand the ICE detention system, as has that of Core Civic (formerly known as Corrections Corporation of America), the U.S.’s largest for-profit prison company. Human rights groups, however, are concerned about the already poor quality of health care for detainees across the country and worry that expansion will make it worse. After the 2015 death of 44-year-old Raul Ernesto Morales of colon cancer, the Adelanto facility was pressured to improve care. But the company that Geo hired to do so has a poor record in jails, prisons and detention facilities across the U.S. What is more, a report scheduled for release in early May by Human Rights Watch and Community Initiatives for Visiting Immigrants in Confinement (CIVIC) will show that in ICE detention, health-care services nationwide are still substandard, and perhaps dangerous.

Last year Human Rights Watch examined 18 in-custody deaths in facilities across the country that occurred between 2012 and 2015, and concluded that substandard care likely contributed to the death of Morales and six others.

Morales, who was from El Salvador, had been in ICE custody for four years at the time of his death, three of them at an Orange County jail, with his last year at Adelanto. An ICE detainee death review showed he had complained of gastrointestinal symptoms for two years before his cancer was diagnosed. ICE investigators noted that three days before Morales’ death, guards shackled and transported him to a hospital emergency room in a passenger car instead of an ambulance, after an outside doctor who’d been treating him said he was “bleeding out.” The investigators called the move “highly risky.”

Investigators also noted that half the nursing staff at Adelanto was inexperienced and untrained in conducting clinical assessments of patients. Off-site medical appointments were at times canceled or delayed because lab understaffing meant test results were sometimes unavailable when expected.

ICE investigators didn’t determine that poor care contributed to Morales’s death. Last year, however, a review of the ICE investigation by Human Rights Watch concluded that it probably did.

“Had Mr. Morales’ gastrointestinal symptoms been evaluated much sooner as was clinically indicated, it is possible that the malignancy from which Mr. Morales died might have been caught at a time when it was still treatable,” the report noted, quoting a medical consultant who analyzed the records.

Human Rights Watch researcher Clara Long said her group’s new report will show that health care in immigration detention has not improved. The study reviews medical records of detainees who died, as well as those who have survived but who said they had received poor care.

In late April, ICE Los Angeles field director David Marin led reporters on a tour of the Adelanto lockup. It sprawls across 108,000 square feet of high desert 40 miles north of San Bernardino. It is the state’s largest Immigration and Customs Enforcement detention center, with some 1,700 people from 70 countries living behind its bars. It’s run under a contract arrangement with the city of Adelanto.

Inside the walls, Marin showed off medical-examination and X-ray suites, a psychiatric observation area, and a dental suite. Carlos Deveza, health services administrator for Correct Care Solutions, the Tennessee-based for-profit that provides health care at Adelanto, said the facility is fully staffed with a physician and mental health personnel. Marin told Capital & Main that CCS came on board in 2016 when ICE made it clear to Geo that its health-care services must improve in the aftermath of Morales’ death. But ICE declined to provide the agency’s most recent Adelanto oversight reports that would show whether its own inspectors have found that health care, especially in the areas it criticized, had gotten better.

The company is among the largest for-profit providers of prison medical and mental health care in the country, with 11,000 employees in prisons, jails, ICE detention centers and community corrections facilities in 38 states. Like other for-profit prison health-care providers, it faces a deluge of lawsuits alleging wrongful deaths and denial of care. Currently more than 260 such claims are pending against CCS alone in more than 30 states.

For example, attorneys for the family of 38-year-old Jennifer Lobato alleged in a 2015 complaint that she died a preventable death of dehydration and electrolyte imbalance as she withdrew from methadone in a Colorado jail cell, and received no medical attention from CCS staff. In California, Armando Vargas, a jail inmate with a long history of mental illness and suicide attempts, hanged himself in the Mariposa County Jail, allegedly after being denied his medication while in CCS care at the jail. His attorneys further allege that no one attempted to administer CPR when they found him hanging in his cell last August. And, last year, the Nation magazine reported that the parents of Nestor Garay sued CCS and the government for wrongful death after their son suffered a stroke in a Texas prison and later died. They alleged their son was forced to wait five hours before being transported to the hospital after his stroke.

In Adelanto, detainee Norma Gutierrez shuffles slightly, dragging her right leg as she enters a tiny interview room on the women’s side of the massive facility. The right side of her mouth droops and her right arm seems weak and trembles. 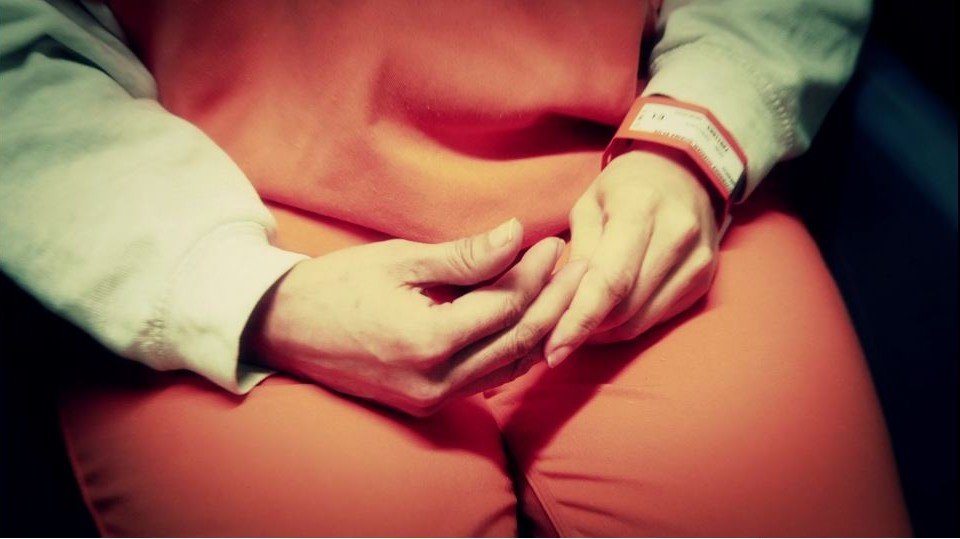 “I look in the mirror and I’m not the same,” she says tearfully.

She recalls the time she awakened on the floor of her dorm, after collapsing into the arms of her dorm-mates last January. She couldn’t move her mouth or her eyes, and she felt stunned and disoriented.

She was taken to a San Bernardino hospital where, she said, she had blood tests, an MRI and X-rays, but claimed hospital nurses refused to answer any questions about her condition, simply telling her she was fine. The next night, she said suffered another collapse. Gutierrez claims her roommates reported that nurses called her episode a “freak show,” while a guard with the rank of lieutenant also reportedly made inappropriate comments about Gutierrez.

This time, she says, she wasn’t hospitalized. Instead, she was taken in handcuffs to a cold room with a bed, a toilet and two blankets. Gutierrez says she remained alone there for four days. The only medical attention she received was from a nurse who took her pulse and brought her previously prescribed medication for depression and anxiety. Later, a psychologist told her that her attack had been psychosomatic. She was returned to the dorm where she suffered a third episode. This time, she says, she didn’t bother to report her symptoms.

One detainee defended the care CCS has provided recently. He told Capital & Main that in the past there were long delays before detainees could get appointments with nurses and doctors. It’s better now, he said.

But Gutierrez says she’s no longer requesting care at Adelanto — she’ll wait to see a doctor on the outside.

Geo Group vice-president Pablo Paez declined to comment on the issues Gutierrez raised and responded to questions by Capital & Main with a statement expressing confidence in the care CCS offers:

“GEO provides high quality, around the clock medical care at Adelanto in partnership with its healthcare subcontractor Correct Care Solutions. Medical care at Adelanto and all other GEO ICE facilities is provided pursuant to mandated, performance based national detention standards set by U.S. Immigration and Customs Enforcement and also adheres to guidelines and standards set by leading third-party accreditation entities including the American Correctional Association and the National Commission on Correctional Health Care.”

Likewise, CCS spokesman Jim Cheney declined to answer questions, both about Gonzalez’s case and the company’s policies and practices, and instead provided a statement identical to Geo’s.

David Marin, the ICE field director, said he and his colleagues are proud of the facility and the care it offers. In an email, ICE spokeswoman Virginia Kice said that her agency will review the Adelanto deaths, and cited the thousands of medical, mental health and dental visits conducted at the facility, and the fact that ICE covers the cost of treatment in the community when it’s necessary and approved.

Denver-based civil rights attorney Dan Weiss, however, said CCS makes it a practice to deny care, understaff its facilities and assign medical staff to duties beyond the scope of their professional licenses.

“Among civil rights lawyers, everybody knows what they do — they kill people for a living,” Weiss said, pointing to cases like that of Jennifer Lobato. “But outside that narrow slice of America, people don’t know. People assume they’re providing a valuable service. People don’t realize how dangerous it is to go to jail and get sick.”

Health care at Adelanto and other ICE facilities, however, may draw greater scrutiny in coming months as the state legislature considers a bill by State Senator Ricardo Lara (D-Bell Gardens).

Lara’s Senate Bill 29, which passed the senate judiciary committee in late March, would require detention centers to meet the latest ICE standards for medical care and other conditions of confinement, and give detainees the right to sue in state court. The bill would also prohibit California cities like Adelanto from acting as intermediaries between ICE and for-profit prison providers.

“Immigrants bear the brunt of a business where profit often trumps care,” Lara said as he urged judiciary committee members to move SB 29 to the appropriations committee, where it currently awaits a hearing.

Human Rights Watch’s Clara Long said Lara’s bill could help ensure that detainees in California get humane treatment. “It might prompt ICE to change their ways,” she said.

In Washington, DC, Mexican Embassy spokesman Ricardo Alday said his government also plans to investigate Sergio Lopez’s death. While problems in ICE detention have existed for years, he said, now any abuses might be a result of the “perception that anything goes because of the current [political] climate.”

Related Topics:Adelanto Detention FacilityimmigrationImmigration and Customs Enforcement (ICE)
Up Next

How Immigration Activists Got ICE Out of a County Jail