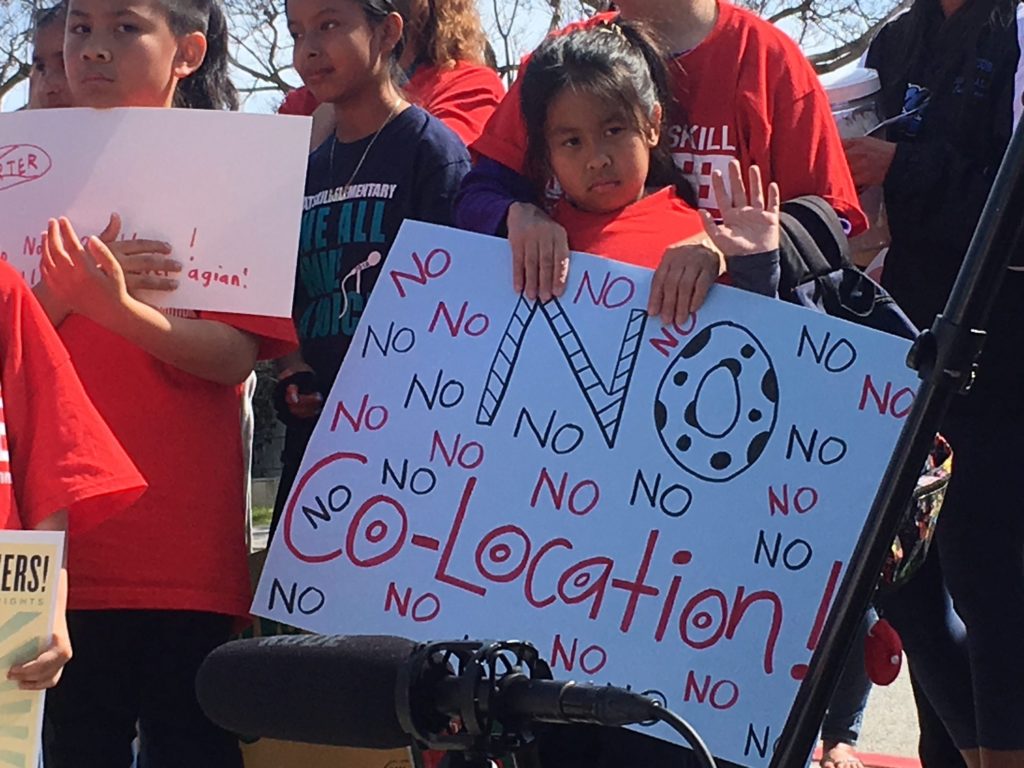 All photos by Larry Buhl

Editor’s Note: Few issues have proven more contentious in the already heated debate over California’s charter schools than that of school “co-location,” the process by which charter schools are allowed to occupy the classrooms, libraries and playgrounds of traditional public schools when those spaces are not in scheduled use. This policy, according to the state’s education code, compels school districts to provide “reasonably equivalent” facilities to charters whenever possible.

The arguments against co-location include the charge that charters are draining funds from public schools to begin with, and through co-location are creating schools within schools — and two-tiered student bodies. Charter school advocates counter that co-location ensures the optimum use of resources at a time when many California public schools, particularly in Los Angeles, are experiencing declining enrollments. Today Larry Buhl reports on the latest storm swirling around a charter academy’s attempt to co-locate at a local public school.

On a sunny afternoon in early April, in the working-class Los Angeles suburb of Carson, well over a hundred students, parents, teachers and community members gathered with a mission: to extol the virtues of Catskill Avenue Elementary School. But it wasn’t entirely a feel-good gathering. They were sounding an alarm that the Catskill campus was slated to share its space with GANAS Academy Charter School in the fall of 2019.

Days after the rally, teachers and parents, backed by the United Teachers Los Angeles union, petitioned the Carson City Council to keep GANAS out of Catskill. Last Friday the council voted 3-0, with the mayor and one member absent, to support Catskill. The council’s resolution, which is symbolic and non-binding, will be sent to representatives of the Los Angeles Unified School District (LAUSD), which had approved GANAS’ charter.

The founder and CEO of GANAS Academy, Sakshi Jain, has until Wednesday, May 1, to decide whether to accept the LAUSD offer to co-locate at Catskill. A LAUSD spokesperson said, in an email, that final offers of co-location sites are legally binding, suggesting the district would not offer GANAS another site if Catskill is rejected.

Critics say GANAS is an example of the problems of charter schools in California: lack of oversight and transparency, and the tendency for districts and the state to greenlight charter schools whether or not there’s a clear need for them. In effect they say GANAS is a solution in search of a problem. And in search of a community. Before Carson’s Catskill Elementary was chosen, GANAS had plans to locate in nearby Wilmington, and used Wilmington’s demographic data in its petition to LAUSD.

Phylis Hoffman, who teaches second grade at Harry Bridges Span School in Wilmington, called into question why Jain picked Wilmington for her school.

“The [GANAS] petition didn’t say where in Wilmington the school would be located, and the academic mission statement seemed very boilerplate and vague. And Jain has no California teaching credential. She appears to be a carpetbagger.” 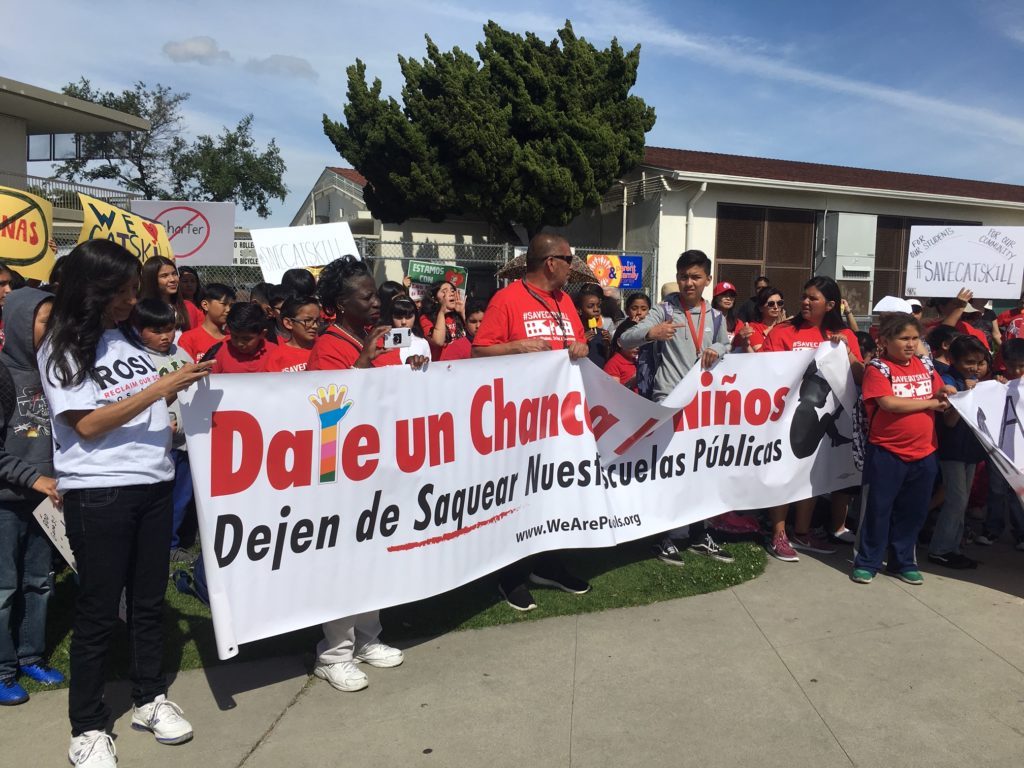 Jain did not respond to multiple requests for comment for this story, nor did members of the GANAS board of directors.

Charter schools are publicly funded but, in most cases, privately run. Up and down the state, community anger has boiled over about the opacity of the process of choosing where a school will co-locate and losing what educators see as valuable classroom space. Teachers unions and, increasingly, parents, see charter schools as siphoning resources from public schools and creating separate schools in the same building.

Elizabeth Untalan, who teaches fifth grade at Catskill, said that every room in the school is being used, including three computer labs, a counseling room, a science lab and a parent center. However, California’s Proposition 39, passed by voters in 2000, requires school districts to offer equitable and adequate unused public space to area charter schools. The key word is “unused,” and if a space is empty for part of the day, it is potentially eligible for a charter school to take it over.

According to her biography on the GANAS site, Jain holds a BA in sociology and education from the University of California, Los Angeles, a masters in counseling from Loyola Marymount University and a Master of Science in education and special education from Touro College. She was an assistant principal at a New York charter school and an assistant principal at Alliance Alice M. Baxter College-Ready High School in San Pedro, California. She does not, however, hold a California teaching credential.

Alicia Baltazar, who has a child at Fries Elementary School in Wilmington, said that few showed up to a meet-and-greet hosted by Jain, and that her answers to questions were vague. “She said she was going to get her own building for the school but didn’t say where. She didn’t even say what grades the school would have. It was all very general, things like longer school days, more math and science and reading time.” 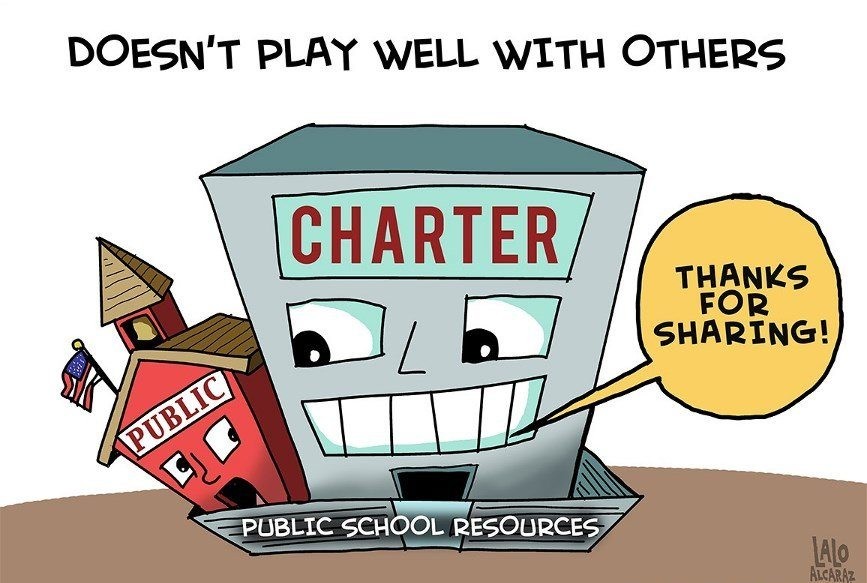 Eventually LAUSD scuttled plans to locate GANAS in Wilmington. Instead, in February of 2019, the school district announced that Catskill Avenue Elementary School in nearby Carson was targeted for co-location. Community members say they’re encouraged by the efforts in Wilmington and they hope their efforts will push GANAS out. They question why the charter’s initial proposal, using statistics for Wilmington, was not updated to reflect Carson, and they want to know why no community impact study was done for Carson. According to 2018 statistics, the median income for Carson is $34,000 higher than for Wilmington.

In an email, a spokesperson for LAUSD responded to these questions, writing, “In compliance with the Prop. 39 implementing regulations, a charter school’s Prop. 39 facilities request must provide information regarding the district school site and/or general geographic area in which it wishes to locate.” The spokesperson did not address the lack of a budget submitted by GANAS but wrote, “Charter schools are not required to submit a budget as part of the Prop. 39 process. However, charter petitioners do submit budgets with their charter petitions, to project their income and expenses for their initial year and the two succeeding years.”

Critics say the charter school’s slogan, “Demographics are not destiny,” and Jain’s vow to offer students “opportunities and freedoms that may not otherwise be possible” are an insult to the communities of color.

“Our schools are not failing, and I invite anyone to come here and take a look,” said Charles Prinzen, a longtime parent volunteer at Banning High School in Wilmington.

Conflict came to a head in early April, in what one parent, Alicia Baltazar, says was supposed to be an open meeting in a Carson park. She says it turned out the meeting was by invitation only, and county sheriffs were called out to keep out anyone not on the guest list. After some negotiation, deputies agreed to let in one parent, Baltazar.

This time, Jain had a few more specifics, Baltazar said. “[Jain] told us that she would start with five kindergarten classes in the first year at Catskill and then grow from there, adding first grade the next year and so on. I said, ‘Wouldn’t that mean GANAS would eventually take over Catskill if it grows?’ She didn’t have an answer.”

Fall 2019 enrollment, according to the school’s website, is open for transitional kindergarten and first grade, but no location is listed.

Elizabeth Untalan told Capital & Main that GANAS and the process for co-locating it have been shrouded in secrecy. “No budget was submitted for LAUSD and parents to review. They have not disclosed start-up costs. The very last meeting that was held by [the] GANAS governing board was on April 4, when the members were voting on accepting the Catskill location site. The teleconferencing was inaudible, and the voting was a four-member quorum.”

Limiting the growth of California’s nearly 3,000 charter schools was a key issue in the LAUSD teachers’ strike, as well as strikes in Oakland and Sacramento this year. Last year LAUSD’s preliminary offer to a charter school, Valley International Preparatory High School, to co-locate at North Hollywood High School, was rescinded after community organizing against it.

A source close to decision-making at LAUSD said when communities organize and resist, especially at more affluent schools, co-location offers do change.