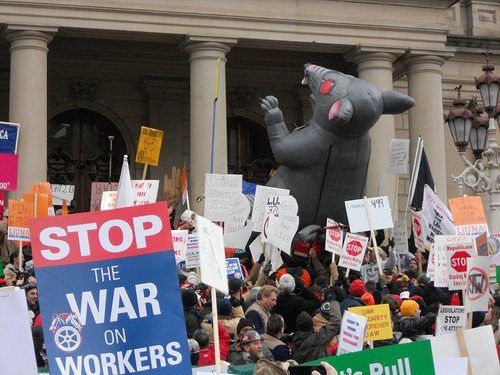 It seems appropriate that after Michigan Governor Rick Snyder (R) shepherded through the state House and Senate the right-wing extremist and corporate CEO backed “right to work” for less legislation—that he had long-called “too divisive to pursue”—without any public input, that he would sign the measure in secret Tuesday.

With as many as 15,000 people swarming the state Capitol in Lansing denouncing Snyder and the legislature for bowing to the likes of the Koch brothers, Grover Norquist, the American Legislative Exchange Council (ALEC) and the extremes of the Republican Party, Snyder retreated behind closed doors to sign the legislation and, only after the fact, announced his signature. Here are some details of the legislation that, if it follows the pattern of “right to work” laws in other states, will lower the standard of living for Michigan workers.

Mike Hall is a former West Virginia newspaper reporter, staff writer for the United Mine Workers Journal and managing editor of the Seafarers Log. This post first appeared on Labor’s Edge and is republished with permission.

Related Topics:Michigan Right to Work Law
Up Next