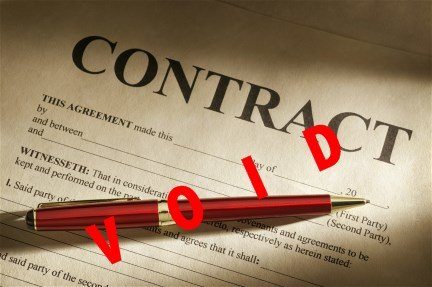 What do big banks and L.A. port trucking companies have in common? Fine print in contracts that traps victims into signing bad deals.

We’ve all signed our share of contracts. Rental agreements, cell phone contracts, car loans. You don’t need to be a legal scholar to understand the basic concept: Two parties enter into an agreement that lasts until a fixed date. And as frustrated as you may get with, say, your landlord, you know that at the very least what you’ve signed off on can’t change upon a whim. Even if you don’t like the terms, contracts are fundamentally about guaranteeing stability.

We take this for granted – but not everyone can. A case in point is drivers at Green Fleet Systems, a trucking company serving the Ports of Los Angeles and Long Beach.

In order to work as an “independent contractor” for the company, the drivers have to sign a lease contract – then pay to lease the company’s trucks. In exchange, they are assured that they will ultimately own the truck they are leasing. In late 2011, about halfway through what was supposed to be a multi-year “lease to-own” agreement, they came in to work one day and were told they needed to sign a brand-new lease. As we’ve reported before, these leases tend to be sham documents that companies force so-called “independent” drivers to sign – much like the home mortgage docs that trapped homeowners into loans whose costs escalated beyond affordability. (In reality, these drivers are misclassified employees, a topic that will be taken up again in a future edition of Frying Pan News.)

Through this arrangement, companies are illegally passing on their business costs – like the costs of expensive new trucks – to de facto employees, while evading other responsibilities like payroll taxes and workers’ compensation. To add insult to injury, these drivers have no ability to fight back because, as “independent contractors,” it is illegal for them to have a voice by forming a union.

While port trucking companies have been misclassifying drivers for years, Green Fleet Systems went a giant step further by unilaterally changing a contract already in effect. A side-by-side comparison of the two documents shows, unsurprisingly, that the changes in the new lease overwhelmingly favor the company, limiting drivers’ rights even further. It states that if the driver ever does claim to be an employee, he or she will not only defend and hold the company harmless, but also pay the company’s defense costs. (Hello, First Amendment!) Another section states that any dispute regarding the lease will be dealt with by an arbitrator chosen by the company. (Hello, Seventh Amendment!)

Why did the company suddenly attempt to make an already one-sided document even more so? Most likely, Green Fleet Systems was attempting to inoculate itself from being forced by the courts or the government to comply with basic employment law.

It turns out that shortly before the drivers were required to sign these new leases, two of their coworkers had filed wage-and-hour claims with the California Labor Commissioner, the government office charged with enforcing labor laws in California. A month later, two more Green Fleet drivers had filed claims. These claims have Green Fleet scrambling for cover.

So, in the midst of preparing to defend its practices in front of the Labor Commissioner, Green Fleet changed the agreement it had with its remaining “independent” drivers to state that drivers’ only option to resolve a dispute was through an arbitration service in Orange County (not the California Labor Commissioner).

In addition to what appears to be an attempt to prohibit drivers from exercising their rights before the Labor Commissioner, Green Fleet has also joined with other trucking companies to try and prevent the Labor Commissioner’s office itself from doing its job of enforcing the law. Just after the four Green Fleet drivers’ hearings concluded in October 2012, while the final decision was still pending, Green Fleet and nine other companies filed a lawsuit attempting to prevent the Labor Commissioner’s office from “investigating, processing, or proceeding to hearing on any claim” from the companies’ drivers. It’s an interesting gambit, somewhat akin to criminal gangs seeking injunctions against the LAPD.

In the end, despite Green Fleet’s attempts to shield itself from California employment laws, the Labor Commissioner found that the four drivers were, in fact, employees and had been unlawfully misclassified. The final decision, released in early 2013, determined that Green Fleet owed the drivers a combined $280,000.

As for the remaining drivers at Green Fleet, it remains to be seen whether the revised leases that required drivers to sign away their rights are even worth the paper they are written on. If the recent decisions from the Labor Commissioner are any indication, probably not. Trucking companies can write whatever they want into leases, they can present those leases to drivers in a language drivers don’t speak, they can refuse to give drivers copies of the leases and they can change the leases unilaterally. Ultimately, none of this will alter the facts on the ground: these drivers are employees, and companies are stealing from them. The more that companies unilaterally change their contracts mid-term, the clearer it is that they are engaging in a cover-up.

(Jessica Durrum is a researcher for the Los Angeles Alliance for a New Economy.)