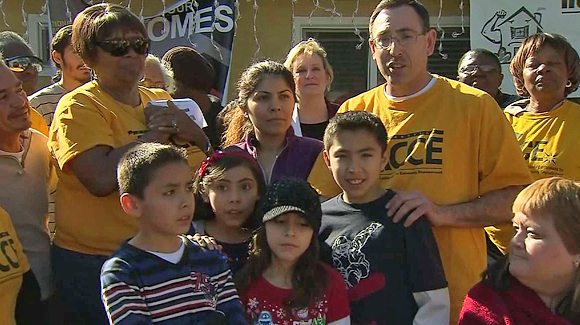 Arturo de los Santos, a 46-year-old former Marine who lives in Riverside, California, doesn’t usually listen to National Public Radio, but a friend told him to pay attention to a disturbing report broadcast Monday on NPR’s “Morning Edition.” The report disclosed that Freddie Mac, the government-sponsored mortgage company, whose mission is “to expand opportunities for home-ownership,” invested billions in mortgage securities that profited when homeowners were unable to refinance.

De los Santos is one of those homeowners that Freddie Mac bet against. Sunday night he got a court summons at his door from Freddie Mac stating that the mortgage giant was going to evict him.

But he’s fighting back, pledging to get arrested rather than leave voluntarily if Riverside County sheriff’s deputies try to remove him, his wife and four children from the home they’ve lived in for almost a decade. He is part of a growing movement of Americans inspired by Occupy Wall Street to stop banks and other lenders from foreclosing on their homes.

On Thursday at noon, de los Santos, his friends and neighbors, and activists from the Alliance of Californians for Community Empowerment (ACCE) will protest at Freddie Mac’s west coast headquarters (444 South Flower St.) in downtown Los Angeles. They will call on Freddie Mac CEO Charles Haldeman to get the mortgage giant to renegotiate a fair modification of de los Santos’ loan, including reducing the mortgage principal.

The NPR investigation of Freddie Mac, done in cooperation with ProPublica (an independent, nonprofit newsroom), uncovered another aspect of the unfolding scandal of Wall Street abuse of struggling homeowners that has led to a nationwide epidemic of foreclosures.

De los Santos and his family moved into their modest three-bedroom house on a cul de sac in Riverside’s La Sierra neighborhood in 2003. It was their first home and represented the American dream they had worked their whole lives for. He has worked for over 21 years as a supervisor at a Santa Ana metal finishing company that makes parts for the aerospace industry.

In 2009, the economic crisis led the factory to reduce his work hours, reducing his income and making it harder to make his monthly payments. He applied for a loan modification with JP Morgan Chase, the giant Wall Street bank that services many of Freddie Mac ‘s loans. Chase told de los Santos that in order to negotiate a loan modification he had to be in default on his loan. Chase notified de los Santos that it was rejecting him for a permanent modification, that they would refuse to accept further payments, and that they intended to foreclose on his home, even after he provided the bank with evidence showing that his income had recovered to its previous level. De los Santos was caught in a Catch-22, but it turns out that — according to the NPR/Pro-Publica investigation — this was not an anomaly but part of Freddie Mac’s strategy.

Last June, the family was evicted from their home and moved to an apartment in Orange County. The bank put the house up for sale, but in Riverside County’s devastated housing market, found no buyers. Seeing his home sit empty infuriated de los Santos. He continued contacting Chase, hoping to persuade the bank to renegotiate the mortgage. After the Occupy Wall Street movement spread to California, de los Santos heard about other homeowners who faced similar abuses and contacted ACCE, a community organizing group that has been helping homeowners throughout California and is part of a national effort to get Congress and the Obama administration to force banks to modify “underwater” mortgages, especially for homeowners victimized by lender manipulation, such as predatory loans.

On December 6, de los Santos took the courageous step of re-occupying his Riverside home, where he has been living since then. He was one of many homeowners around the country who took similar actions that day as part of a nationwide “Occupy Our Homes” campaign. On December 24, de los Santos moved his wife and children back into the house. That day he was joined at a media event by local clergy, members of ACCE and the Service Employees International Union, and other supporters.

“We’re glad to be back in the house,” de los Santos told the Valley News, a local paper. “My kids are happy. They have a place to ride their bikes and play. Their school is just around the corner. They don’t understand what’s going on.”

“We have celebrated Christmas in our home since 2003 when we bought it,” de los Santos said at the [Christmas Eve] event. “I wasn’t going to let this holiday season be any different. I owed it to my kids. If JPMorgan Chase and Freddie Mac had dealt with us fairly at the beginning of the loan modification process, we wouldn’t be in this situation.”

After de los Santos heard the NPR/Pro-Publica report on Monday, he understood why he was in this quagmire not of his own making. It strengthened his resolve to fight to keep his home.

“Nobody likes to get arrested,” said de los Santos. “I didn’t do anything wrong. I’m doing this for my family and for the millions of other families in similar situations. We can’t let the Wall Street banks and Freddie Mac get away with these kinds of practices.”

Last month in California alone, there were over 52,000 foreclosures. A recent report sponsored by bank reform groups reveals that if banks lowered the principal balance on all underwater mortgages to their current market value, it would pump over $70 billion per year back into the economy, allow millions of families to stay in their homes, and create over one million jobs. They want Congress and the Obama administration to pass legislation requiring banks to reduce the principal for homeowners facing foreclosure.