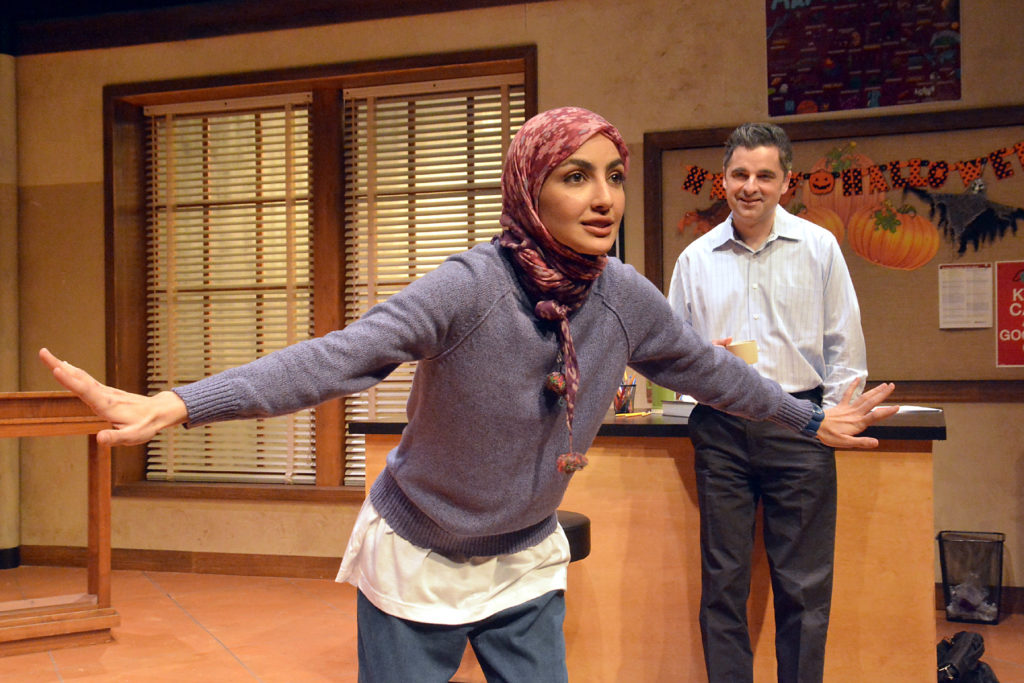 Paradise, by Laura Maria Censabella, has a lot going for it. Drawn from the playwright’s experience as an artist-in-residence in the New York City school system, it builds around the relationship between Yasmeen (Medalion Rahimi), a 17-year-old Yemeni-American student, and her biology instructor, Dr. Royston (Jeff Marlow), who supports and encourages her new-found passion for learning and experiment. A West Coast premiere directed by Vicangelo Bulluck at the Odyssey Theatre, the play features multidimensional characters, fluid dialogue and meaty conflicts involving culture, science and religion, but a one-note portrayal by Rahimi under Bulluck’s lax direction sabotages what might have been an intriguing production.

Marlow, in a topnotch performance, plays a once well-respected scientist who’s been barred from his profession for making threats to a colleague, and now teaches adolescents in the Bronx. After Yasmeen fails a test, she comes to his classroom to plead for an opportunity to make it up. At first Royston refuses, but the more he talks to the girl, the more he realizes how bright she is, and that her failure on the exam may have explicable roots. Soon he learns that Yasmeen has an interesting idea for an experiment involving adolescents and their emotions, a field of inquiry that relates to Royston’s former research. The two begin to work together with twin goals: Royston’s redemption among his scientific peers and Yasmeen’s securing of a scholarship to Columbia University. 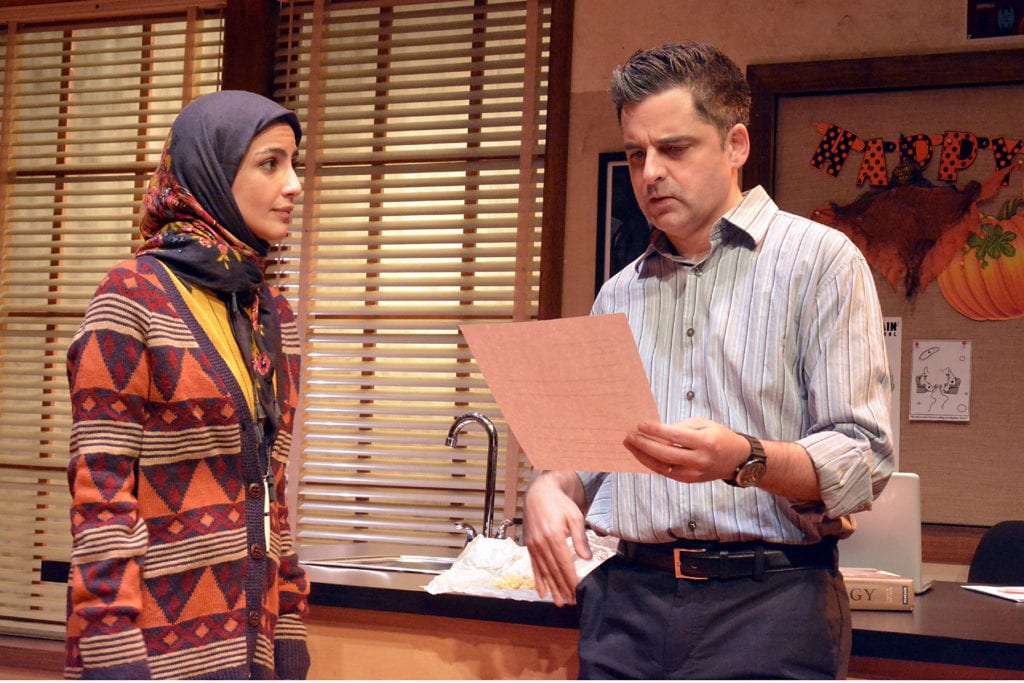 Though he tries to be respectful, Royston more than once offends Yasmeen by commenting on her headscarf and what he perceives as Islam’s restrictions on women — and she hits back with observations about the violence against women in American society and other sexist norms. Despite these differences, a bond develops between them until, not unpredictably, Yasmeen’s family sets up an arranged marriage for her that would surely torpedo her dreams. An observant Muslim, loyal to her family, she’s desperately torn. How this conflict plays out — not straightforwardly but with several challenging complications — is the relatable dynamic that drives the drama to an ironic, compelling catharsis.

One of the play’s commendable features is that it provides a platform for dialogue about the Quran and Islamic beliefs and traditions. There are a few moments where this registers as too teacherly (reasonably educated audience members will be apprised of much of this information already), but on the whole Censabella avoids being didactic because her characters hold our attention. For example, Royston, a hardcore nonbeliever, is a refugee from the Bible Belt; he’s chilly and sardonic when we meet him, but his personality becomes more involving as his checkered backstory is revealed.

The play’s main focus remains the difficulties of young women (regardless of their backgrounds) whose career aspirations are thwarted by cultural expectations, who are expected to sacrifice themselves for the good of their families. Into this vital issue Censabella successfully weaves additional dramatic conflicts — tensions spurred by ego and ambition.

Marlow inhabits his role completely, and his work is all the more impressive because Rahimi (whose program bio indicates limited stage experience) is so disturbingly limited. Instead of aspiring to the complex, exceptional young woman the playwright has conjured, she reduces Yasmeen to a gushing wide-eyed teenager, whose ability to process scientific discourse seems questionable at best. All the complexities of Rahimi’s character disappear behind this shallow façade. Sadly, the production suffers.