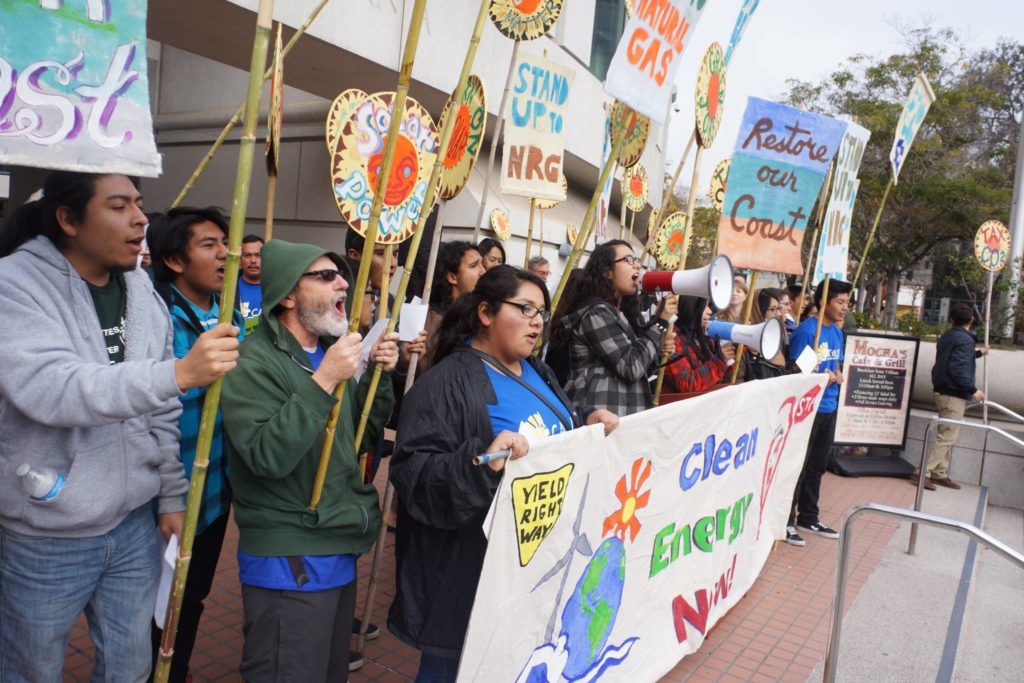 Natural gas power plants have left their stamp on the beaches in Oxnard, a city of about 200,000 along the Pacific Coast between Malibu and Santa Barbara. Add industrial plants belching smoke into the coastal fog, and that noxious mix often shrouds the city in a gray-brown haze.

Oxnard has long been one of the most environmentally burdened communities in the state, and for generations the predominantly Latino residents shrugged and suffered in silence, quietly accepting the industries that continued to pollute their community.

The attitude of many was, “We get screwed because we’re poor,” says Lucas Zucker, a spokesman for the Central Coast Alliance United for a Sustainable Economy (CAUSE).

But that attitude has been changing. An aroused community is finding its voice and has been venting anger towards new oil and gas industry proposals for the past decade. Now, residents and city officials are saying no to industry on their beaches.

The current target is the Puente Power Project, a 262-megawatt gas-fired plant, proposed by Southern California Edison and Houston-based NRG Energy. The project would provide enough electricity to serve 130,000, according to the company, and would replace two plants at NRG’s 58-year-old Mandalay Generating Station on an Oxnard beach. Those plants use an obsolete technology very harmful to marine life, and the state has ordered them closed by 2020. 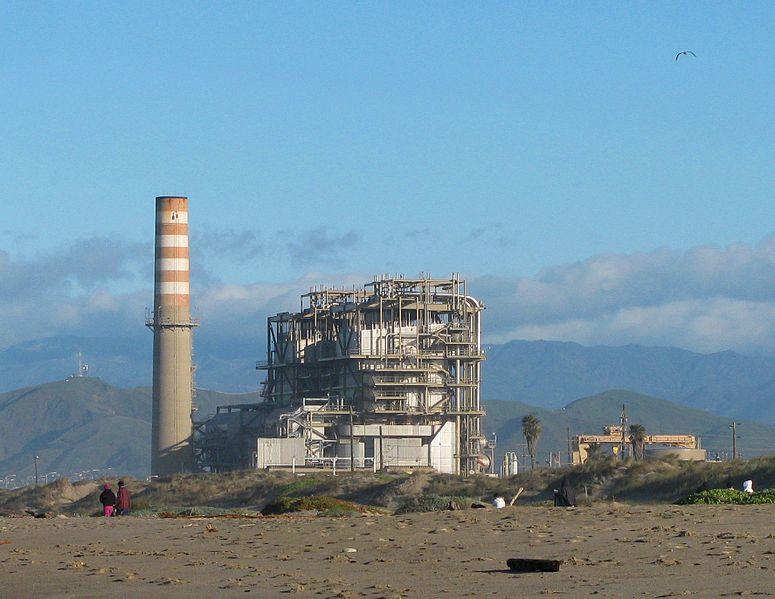 A new power plant promising nearly $3 million annually in property taxes, as Puente does, is no longer greeted with a shrug or even a cheer. The tide began turning against industry after the California Coastal Conservancy awarded a $13 million grant to restore the wetlands at Oxnard’s Ormond Beach, and the United States Environmental Protection Agency named an abandoned toxic waste dump on the beach a Superfund cleanup site.

The conservancy grant and the Superfund designation brought much more local attention to the issue of “rare wetlands beneath smokestacks,” Zucker told Capital & Main.

That attention turned to anger that spilled over in 2006, after BHP Billiton, the largest mining company in the world, proposed a liquefied natural gas (LNG) terminal in the Santa Barbara channel. That project would have required a pipeline to run under a densely populated, low-income residential neighborhood in Oxnard. When more than 3,000 residents turned out in opposition at a State Lands Commission hearing, the project was rejected.

And the Oxnard City Council passed a moratorium three years ago barring building new power plants along the city’s coast.

Now, environmental groups opposing the Puente project are using two maps to bolster their legal arguments. The first, a Nature Conservancy sea level rise map, projects that Puente would be vulnerable to flooding due to sea level rise triggered by climate change.

“The city council doesn’t usually agree on much,” but it unanimously opposed Puente, says Oxnard’s Mayor Pro Tem, Carmen Ramírez. NRG could at least have found a less environmentally sensitive area for a new power plant, or, even better, have built a renewable energy facility rather than a natural gas plant, she says.

But none of the options, including locations proposed by the city, was viable, says Alexandra Angelina, an NRG spokesperson.

“They required either extensive construction of new high-voltage electric lines, or placed the plant closer to residential centers, neither of which is desirable to any stakeholders,” she says.

The Mandalay site with existing infrastructure is “the best place to build the new power plant, located away from densely populated areas, and minimizing the environmental impacts,” Angelina says.

For Councilwoman Ramírez, that translates as “the company thinks any alternative that requires building new gas infrastructure is too expensive.”

Despite opposition from the city council and residents, the Puente project is far from a settled issue. A key state commission has already given Puente a green light, and its supporters include the Oxnard Chamber of Commerce, which argues that the project means dollars and jobs. More than a third of the millions the plant will generate annually in property taxes will go to the city’s schools, says Chamber President Nancy Lindholm. Puente’s construction and the demolition of the two Mandalay plants also will generate over $25 million in local payrolls, she says.

Even though federal data shows that the two Mandalay plants were operating at only 6.5 percent of their capacity in 2015, the chamber and NRG maintain that the new Puente project is necessary to meet the region’s power needs.

“They would invite residents to a free dinner and presentation about a so-called new and improved power plant and persuaded them to speak in support of the project at the city council meeting,” Zucker says. But few residents spoke up in favor of Puente.

Latham & Watkins, NRG’s law firm, sent a letter to the California Coastal Commission in 2015, asking it to pull back funding it had granted to the city to complete its Local Coastal Program, a long-term vision for a deindustrialized and restored Oxnard coastline.

Even more galling, residents say, was NRG’s threat, expressed in Oxnard City Council meetings in 2015, to abandon the two Mandalay plants, once they are decommissioned, to rust on the beach if the Puente proposal is rejected.

NRG says its offer to clean up Mandalay only if Puente is built is not a threat. The company was not required to, but voluntarily offered to demolish the two plants in its proposal, company spokesperson Angelina says.

“If Puente did not move forward, NRG would remain as property owner,” she says. If it becomes necessary to operate the plants past their retirement dates, “NRG will comply with all applicable laws,” she says. “If the plants were to retire, NRG would continue to comply with all regulations for the safe, secure and environmentally responsible retirement of the units. However, the structures themselves would likely remain in place until another redevelopment opportunity provided the revenue needed to demolish and remove them.”

“NRG is saying that they will only clean up Mandalay if they are allowed to build Puente,” she says.

The Chamber of Commerce’s Lindholm dangles the prospect of demolishing the Mandalay plants as an inducement for supporting Puente, emphasizing that the demolition “will greatly improve our coastline and improve beach access for residents.”

Ramírez is wary of any potential polluters, given their ugly history in Oxnard. Halco, a metal smelter, left behind the radioactive slag heap on Ormond Beach and ran, she says. That slag is now the Superfund toxic waste site.

“NRG is not even trying to play nice,” Ramírez says, adding that the company wouldn’t allow the California Coastal Commission onto their site to do an environmental survey.

Ultimately the decision on Puente’s fate is not up to the city, but to the state Public Utilities Commission and the California Energy Commission. Environmentalists and Oxnard residents worry that the agencies could override the will of the city.

In an unprecedented January, 2016, ruling, PUC administrative law judge Regina DeAngelis said Puente should not be approved until the commission completes further analysis of the sea level rise and the project’s impacts on communities of color. Her decision was the first time the PUC had ever declined to approve a power plant based on climate change risks or environmental justice issues.

But the PUC overruled DeAngelis in May,  and approved the construction of Puente. The proposed project has cleared one regulatory hurdle. Only the energy commission remains.

A decision from that commission had been expected by now, but last week the panel revised its schedule to accommodate additional public comments and testimony. Those closely observing the case say a decision won’t be coming before the end of the year.

How Far Can California Go It Alone After Trump Reneges on Climate Accord?