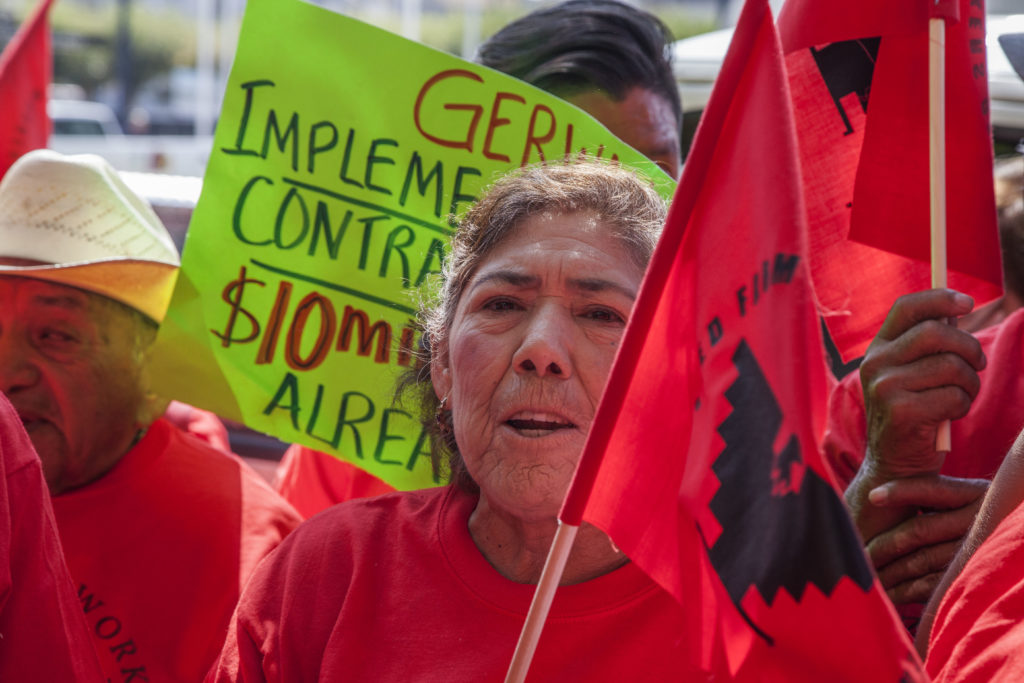 Members of the United Farm Workers in San Francisco protest the case brought by Gerawan Farms at the State Supreme Court. (All photos copyright David Bacon)

California’s gigantic peach and grape grower, Gerawan Farms, reached the end of its legal road last week at the state Supreme Court, when justices unanimously threw out its claim that the company was not bound by the Mandatory Mediation Law, a provision of the Agricultural Labor Relations Act (ALRA). In doing so, the court dealt a defeat to a cluster of right-wing think tanks, grower organizations and Republican politicians who sought to use the company’s case to have the law itself declared unconstitutional, and to drastically weaken the collective bargaining rights of California farm workers.

“After four years of stalling,” United Farm Workers president Arturo Rodriguez told Capital & Main, “Gerawan Farming Inc. should immediately honor the union contract hammered out by a neutral state mediator in 2013 and pay its workers the more than $10 million it already owes them.”

Gerawan Farming opposes even the idea of unions and contracts for the 5,000 people
who now pick its fruit.

The Gerawan case goes back a quarter of a century, to a union election held in 1990 and certified in 1992, when the company employed 1,000 workers. The election was marked by serious legal violations, and the Agricultural Labor Relations Board (ALRB) charged the company with tearing down housing for its workers among other efforts to intimidate them. Nevertheless, a majority of workers voted for the UFW.

The company challenged the election. After its appeal was rejected in 1995, the union asked to begin bargaining a contract to raise wages and provide benefits. In their one meeting, co-owner Mike Gerawan told union negotiators, “I don’t want the union and I don’t need the union.” That ended bargaining. In 2002, however, then-governor Gray Davis signed a bill to change that situation. Using this new section of ALRA, workers could vote for a union and later call in a mediator if their employer refuses to negotiate a first-time contract. The mediator, chosen by the state, hears from both the union and the grower, and writes a report recommending a settlement. Once the ALRB adopts the report, it becomes a binding union contract.

Growers challenged the law, taking it to the state Court of Appeals, where they lost in 2006. The union has since used mandatory mediation to negotiate contracts covering about 3,000 workers with several large California agricultural corporations, including D’Arrigo Brothers in Salinas and Triple E Produce in the San Joaquin Valley.

At Gerawan there was little union activity in the years following the company’s refusal to negotiate, although the UFW says it maintained contact and relationships with the workers there. In 2012 the union sent the company another request to negotiate. A series of meetings were held, but agreement was never reached, so the UFW called for a mediator.

The mediator finally made a report to the ALRB, which adopted it in November, 2013. Under the law, that report should then have become the agreement. Gerawan, however, refused to implement it. Instead, by then it had already begun a multi-pronged campaign to avoid the contract and to challenge the law itself, including an aggressive campaign to get its employees to decertify their union. Gerawan benefited from the financial support of the Western Growers Association and the California Farm Bureau Federation. Its legal campaign was advised by the far-right Center for Constitutional Jurisprudence.

Inside the company, management organized a pro-company, anti-union group, which circulated the decertification petitions. Signatures were gathered by foremen, who canceled work shifts and pressured workers to attend pro-company rallies in Visalia and Sacramento. The rallies’ expenses were borne by grower groups, including the California Fresh Fruit Association (formerly the Grape and Tree Fruit League). The Center for Worker Freedom, headquartered in the Washington DC offices of Grover Norquist’s Americans for Tax Reform (ATR), publicized the pro-decertification demonstrations through, among other things, billboards in Sacramento attacking the UFW and ALRB. The ATR is funded by Karl Rove’s Crossroads GPS and the Koch brothers, and its powerful political allies in the San Joaquin Valley include Republican Congressmembers Devin Nunes and Kevin McCarthy.

According to one worker, Jose Gonzalez, “When they passed around the decertification petitions, they looked at the crews who didn’t sign them. Then those crews didn’t have any more work.” Severino Salas, another worker, says simply, “People were afraid to support the union, even though they wanted it, for fear of losing their jobs.”

Under intense pressure from growers and their political allies, the ALRB scheduled a decertification election, despite pending charges of intimidation, company interference and even forged petition signatures. Before the ballots could be counted, however, board agents sealed the ballot boxes, saying no count could be made without hearings to determine if the election was free and fair. The charges were eventually upheld by the ALRB.

Gerawan’s attorneys then convinced the State Court of Appeals for Fresno’s conservative 5th District to rule in May, 2015, that the mandatory mediation section of the ALRA was unconstitutional. That decision, in which the court essentially ruled against its earlier decision validating the law, was appealed to the state Supreme Court. That tribunal finally decided the issue for good November 28.

In its argument, Gerawan claimed that its workers had been “abandoned” by the UFW during the years after the company refused to negotiate. The union’s certification as the workers’ bargaining agent, it therefore alleged, had expired sometime before the UFW made its 2012 renewed bargaining demand. Gerawan was joined by another grower making the same claim, Tri-Fanucchi Farms. The union and the ALRB argued that this abandonment idea would reward growers who could delay negotiating for years, replace their old pro-union workforces, and then claim the workers had been abandoned by the union. The state Supreme Court ruled specifically against this “abandonment” defense.

The Appeals Court had claimed in its 2015 decision knocking out the law that it would result in different standards for different employers. The Supreme Court also disagreed that this possibility was enough to invalidate the law.

Behind the legal arguments, however, lies ideology and economic self-interest. Gerawan opposes even the idea of unions and contracts for the 5,000 people who now pick its fruit. “We believe that coerced contracts are constitutionally at odds with free choice,” Dan Gerawan said in an email to the Associated Press after the ruling. The company did not respond to Capital & Main’s request for comment.

The UFW calculated that the difference between what those workers would have been paid under the mediator’s 2013 union agreement, and what they were actually paid in the years since then, is about $10 million.

“Had the negotiations been successful many years ago you would have had years to deal with the union,” noted Cruz Reynoso, a former California Supreme Court justice, in a letter to Gerawan in 2014. “What is troubling … is that your refusal to implement the contract issued by the neutral mediator and the ALRB board means your workers continue to be denied the many millions of dollars in wage increases and other benefits they are already owed.”

Now that the Supreme Court has essentially ordered Gerawan to implement the mediator’s contract, the UFW will have to build a union at the company and enforce the agreement — no easy task given the years of Gerawan’s anti-union campaign.

Meanwhile, membership in the UFW has been growing slowly in the past several years. The union has won representation elections and contracts in places like the Gourmet Trading blueberry farm, where a 2015 strike led to a contract covering about 450 pickers that was signed this past May. The Supreme Court decision itself won’t likely lead to many new contracts based on past elections. But it will convince other growers that when workers vote for the union, the state has teeth that can force them to negotiate. That can encourage workers in other companies to organize, and to raise the abysmal wages now current in California agriculture.

How the GOP Tax Bill Would Hurt Californians