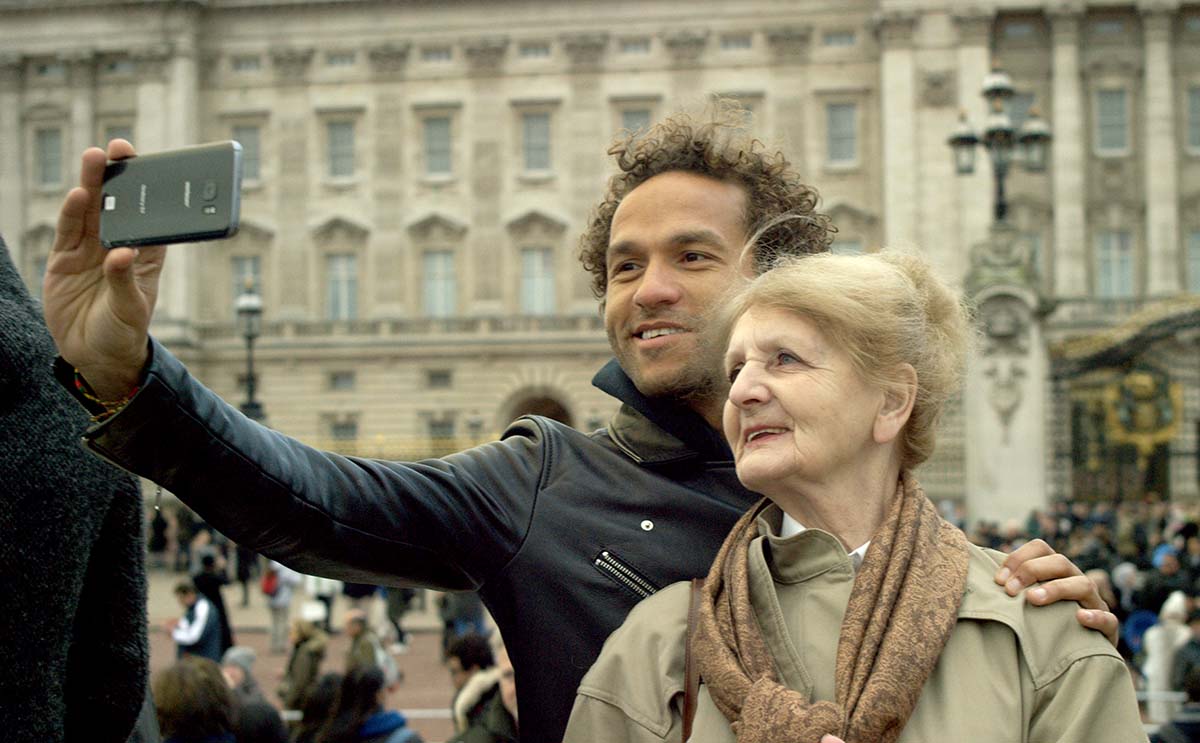 Journalist Sian-Pierre Regis calls his mom his “ride or die.” So when his 75-year-old mother Rebecca Danigelis began complaining that she felt that the management at the Boston hotel at which she had toiled for 40 years was trying to push her out, he knew he had to do something. He picked up a camera and started filming, first focusing on his mother as she struggled with workplace age discrimination and then on his effort to crowdfund money to fulfill her bucket list.

Even before Regis finished the film, footage from the documentary struck a chord with people all over the world. The first trailer was seen 38 million times on Facebook and spawned thousands of emails and letters. Four years and $58,000 (from 603 contributors) later, the result is Duty Free, a documentary that at once represents the economic insecurity endured by the elderly while it also underscores the power of familial love. Capital & Main spoke to Regis about his film. The following interview was edited for length and clarity.

CAPITAL & MAIN: Economic insecurity among our elderly is rarely talked about. Do you feel like what happened to your mother is a sort of silent epidemic?

Sian-Pierre Regis: Yeah. I think part of the reason that the film has been so successful and why people are clawing for this type of story is because it is their story, or it’s a story of people that they know. Thousands of people wrote in saying, “This happened to me.” Some people [are dealing with] trumped up charges that are definitely masked age discrimination to get them [removed from] a job. Sometimes it’s more overt, but people are experiencing it and, unfortunately, oftentimes that older worker, in particular, feels powerless.

They are like victims of abuse, who often blame themselves. They don’t realize that it’s not their fault.

Right. And to your point, [they feel] a sense of pride that they don’t want to tell everybody else what happened to them because they think it’s their fault. That’s what we want to talk about, to say, “Actually it’s not your fault at all.” It’s the employer’s issue, right?

“When you have the determination to make somebody whole again, you will go to any lengths to do so.”

What’s striking about your mom’s story was she seemed to have done everything right. Here’s this hardworking woman who was prideful in her job and was taking care of your [mentally ill] brother — but it’s so precarious. Because she loses her job and she’s threatened with eviction. You see how people can become homeless so quickly. If you weren’t around, who knows what would’ve happened?

It’s the tightrope I think most Americans walk. There’s a factoid out there that some 63% of Americans don’t have $500 in their bank account to cover them through a rainy day. Yet every time we talk about older folks and retirement, it’s the “golden years,” right? It’s you’re on a yacht, you are taking weeks off to vacation. The fact is the majority of people are caught in the middle. They don’t have any nest egg. They’re struggling to survive on social security, which pays on average, what, $1,500 a month to most people? So we’re not talking about those people. The other section is the people who are truly impoverished and how we talk about them as a culture is “Oh, it’s all their fault.” In my mom’s situation, you could do everything [right]…you have really no vices, you are living hand to mouth, and you send your kids to a great school. You are living the American Dream in some ways, and this is what you’re left with at the back end of the Dream.

The film is about economic insecurity, about familial love and giving back to the family that raised you. But then it’s also about working so hard for all those years and not doing the things that you wanted to do. What was the moment that made you say, ‘OK, mom, let’s write down your bucket list’?

It was really a gut reaction from me to do something so impossible and unbelievable, because the state that my mom was in was beyond anything I’d ever seen before. I really thought that my mom was on the brink of everything being over. Work had defined her. And to lose all of that was truly the most tragic moment for her and for me. The bucket list was a way to lift her spirit and, like, take her away. And it was such a crazy idea. I’m shocked that I was able to pull it off. But when you have the determination to sort of make somebody whole again, you will go to any lengths to do so.

How did your relationship with your mom change over the course of the making of this film?

In the beginning of the film it says we were all we had, and it’s true. As any child of a single mom will tell you, it’s a team. You are out there together making life happen. When this happened to her, I had to show up for my teammate. My mom is my ride or die. But what it did was allow me to learn about her history and to understand why she made the decisions that she had to make, understand her sacrifice. I didn’t want to leave anything dangling with my mom. And this was my opportunity to sort of answer every question and to learn about her so deeply.

“You know what happens on your first day of work: You get sick days, two weeks’ vacation, whatever. But nobody tells you what you can expect on your last day.”

What do you hope this documentary accomplishes?

The most important thing is to say age discrimination is pervasive. It’s everywhere and it can happen to everyone, and it will. So hopefully sparking some empathy so that people are more aware and willing to take action. And, now that the conversation has been started, it’s like, OK, what change can we make?

My mom is working with Congresswoman Sylvia Garcia from Texas, [whose bill] The Protect Older Job Applicants Act [was passed by the House on Nov. 4]. Basically what that does is it sort of limits what employers can ask for in the job application process. The Age Discrimination in Employment Act [passed in 1967], which protects people from age discrimination on the job, it really only protects them if they’re employed. My mom really wants to work with HR organizations to create a last page in their handbook, which I think is really powerful. You know what happens on your first day of work: You get sick days, two weeks’ vacation, whatever. But nobody tells you what you can expect on your last day. What happens if you’re fired? What happens if you are restructured? What kind of notice can you expect? Where do you go? All of those things that happen as more and more people “age out” of the workforce.

A lot of the things you are talking about, what seniors need as far as respect and dignity and support, are the same things that all workers need. Without unions to protect them, it’s really difficult.

It takes us until [we are older] to say, “Oh my God, not only am I getting paid less than I’m worth, but it’s a lot harder for me to find a job and that’s not OK because I’m living much longer than any generation before.” It doesn’t make any sense.

We are working with Workers United, which is a huge union that represents hospitality workers, garment workers and others, to talk about the importance of unions and what they did to build this country and how necessary they are now to balance the employer-employee relationship. We’ve gone for far too long where the employer alone makes all the rules and the employee just follows along. At the end of the day, unions are in place to make sure that workers’ rights are respected and unfortunately they’ve been eaten away at for decades in this country. Because if the employer is not going to support you and you don’t have family, who do you have?