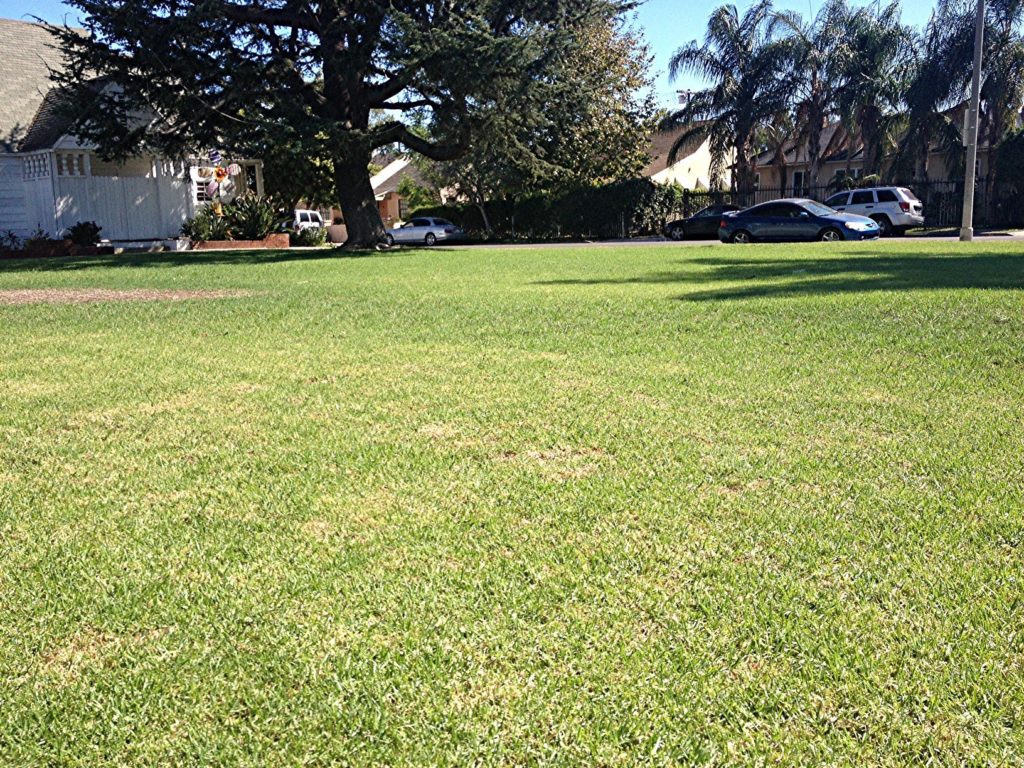 In the 1947 science fiction novel Greener Than You Think, a scientist invents a powerful fertilizer intended to boost crop production and combat hunger. The salesman she hires, however, sees more business potential in lawn care, and convinces a Los Angeles homeowner to try the formula on a yellowing, “sad and sickly” front yard. When the salesman stops back the next day, the lawn is transformed. “There wasn’t a single bare spot visible in the whole lush, healthy, expanse. And it was green. Green . . . over every inch of its soft, undulating surface: a pale apple green where the blades waved to expose its underparts and a rich, dazzling emerald on top.”[i]

The lawn grows uncontrollably in the novel, and the grass ultimately takes revenge and crushes cities like a green giant. Whether or not author Ward Moore chose the L.A. lawn as apocalyptic threat to satirize the post-war suburban ideal home, that desire for the well-kept, highly manicured, continually-irrigated, pesticide-laden, weed-free, grassy lawn has long been seen as an “American obsession.”

In the Los Angeles region, the private yard and its lawn became a replacement for public space and a contribution to its privatization. With the detached, single family house as the idealized dwelling, family relaxation, children’s play and social events could take place in back and front yards, reducing or sometimes substituting for public parks, playgrounds, and civic plazas. Lawns also became a target of opportunity for lawn-care and herbicide businesses that saw the industrial lawn as a profit center. [ii]

For many suburban developers and residents, the lawn became central to the character and identity of the suburban home. While the dominant image of yard space in Southern California in the late 19th and early 20th centuries may have been the productive landscape of a hobby orchard, desire for a tidy front lawn emerged with the 1920s residential boom. Private developers of garden suburbs included landscaped setbacks on each property that visually merged into ribbons of green in front of homes.[iii] In 1934, the City of L.A. passed a yard ordinance requiring that all residences have yard space, cementing the detached dwelling surrounded by landscaping as the region’s dominant urban form.[iv]

The 1950s “super green lawn look,” nurtured by irrigation and dependent, particularly in Southern California, on low, flat-rate water bills and unlimited water supplies from distant sources, is today in trouble.  While UCLA researchers conducting an archaeology of daily life in Southern California have documented that the rise of electronic entertainment has significantly reduced the amount of time that middle class homeowners spend in their back yards, it is the severe drought that California has experienced since 2012 that has led to a major shift in consciousness and policymaking.

An urban “landscape ethic” is focusing on the 40-50% of water used primarily for landscaping.

As early as 1980, a group of L.A. water activists, led by the indomitable Dorothy Green, began to talk about a “landscape ethic,” focused on the 40-50 percent of water in urban areas used primarily for landscaping. Green died in 2008, but today  neighborhood social pressures have shifted from decrying residents with dry or unkempt yards, to “drought shaming” of households perceived to over-water, especially wealthy residents or celebrities who appear to be buying their way out of conservation efforts. [v]

Restrictions, incentives and changing attitudes have added up to an unprecedented “attack” on the lawn, to paraphrase the title of a project by L.A. artist Fritz Haeg. Expanses of green, irrigated turf are giving way to an assortment of succulents and cacti; crushed granite, bark or mulch; dead or dying lawns; raised bed gardens; hardscapes like concrete, brick or pavers; even artificial turf and gravelscape.

Do these more diverse yards constitute the landscape ethic that Dorothy Green and others sought? Each lawn that is removed creates an opportunity and poses a challenge. Can public agencies, residents, design professionals and the region’s often underpaid and overworked gardeners collaborate on spreading awareness of more sustainable landscapes? If fewer people live with their own grassy play areas, can the city create more neighborhood parks, especially in underserved neighborhoods? How can water infiltration and capture on private properties be integrated with regional systems to expand local sources of water? Will restrictions on irrigated grass lawns last if California experiences a wet, El Niño winter?

Robert Gottlieb is the founder and former director of the Urban & Environmental Policy Institute at Occidental College. He is the author of twelve books, including Food Justice, and editor of two MIT Press series, “Urban and Industrial Environments” and “Food, Health, and Environment.” A long-time environmental and social justice activist, Professor Gottlieb has been engaged in researching and participating in social movements for more than 50 years.