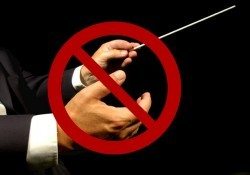 Skopje, Macedonia might seem a long way from Los Angeles, but for the 2,000 professional musicians who earn their living recording the film scores for Hollywood’s big movie studios, the Balkan capital — and the bleak future for L.A. movie musicians that it might represent — seems to be getting closer every day.

In at least one way, that future has already arrived in the form of Lionsgate’s Draft Day and the Ivan Reitman film’s nonunion score. Starring Kevin Costner, the movie tells an all-American story of a fictionalized general manager of the lowly Cleveland Browns and his efforts to save Cleveland football on NFL draft day by trading for the number one player pick.

Less all-American is the story behind the recording of Draft Day’s music, which was reportedly piped via the Internet to a Hollywood studio and the film’s composer, John Debney, from the stages of the low-wage, bargain-basement Macedonian Radio Symphony Orchestra in Skopje.

The orchestra, which is better known by its movie-credits business moniker, FAME’S Project, is hardly serious competition for Hollywood. At least for now. But Draft Day comes at a time when film production in California appears increasingly endangered. And any job loss to offshore orchestras in such a precarious climate hurts, says John Acosta, Vice President of American Federation of Musicians (AFM) Local 47.

“Their performance on this major motion picture displaced, I would say, over a hundred U.S. workers,” he estimates. “Depending on the number of days of work the film requires … you may have up to a hundred people working on it. All that labor [was] done abroad with foreign workers and [at] less-than-standard pay.”

Laying the blame for those job losses depends on whom one speaks to. Everybody, however, agrees that the decline is very real. According to a Milken Institute report released earlier this year, California lost more than 16,000 film production jobs between 2004 and 2012 — a more than 10-percent drop. And film production overall in the state has declined by half in the last 15 years. A report issued last month by Film L.A., Los Angeles’ not-for-profit film office, says that where the state claimed 64 percent of the top 25 live‐action movies of 1997, by 2013 California’s share had dropped to just eight percent.

Those kind of numbers recently led Assemblymen Mike Gatto (D-Los Angeles) and Raul Bocanegra (D-Pacoima) to sponsor AB 1839, which would expand and extend California’s 2009, $100-million program of film tax incentives. Both laws were designed to counter runaway production attributed to aggressive film subsidies that have become commonplace across the country and abroad, and to which Film L.A. attributes California’s drop to fourth place behind Canada, Louisiana and the UK in its share of productions with budgets between $1.2 million and $225 million.

Sazer, who spoke to Capital & Main from a Twentieth Century Fox scoring stage, where he is working on director Bryan Singer’s $200 million X-Men: Days of Future Past, is a classically trained session musician who has been working in Hollywood since the 1980s, sitting in on film and television scores, records and even advertising jingles.

The $20-million-budgeted Draft Day‘s script originally had Costner’s character as the general manager of the Buffalo Bills but the team was quickly rewritten as the Cleveland Browns when Lionsgate secured $4.9 million in Ohio tax credits to shoot in Cleveland. The violinist points out that offshore recording is increasingly typical of productions that take jobs-incentive money and run — in this case straight to Skopje. (Lionsgate did not respond by press time to a request for comment on this story.)

“It’s usually bottom-of-the-barrel stuff,” Sazer says of the films scored by FAME’S. “Draft Day is certainly one of the biggest projects I’m aware of that’s actually used this. The fact is that [Lionsgate] received millions of dollars of tax credits, so they took lots of U.S. taxpayer dollars, and then ran away to this really low-wage situation in Eastern Europe.”

Draft Day‘s independent producer, Lionsgate, the company sitting on the lucrative Hunger Games franchise, is a familiar thorn in the side to both Sazer and Acosta. The so-called “Mini-Major” studio, which is based in Santa Monica, is representative of the new wave of giant indies and studio subsidiaries that continue to resist becoming AFM signatories, despite major-studio scale profits. It has been the frequent subject of union campaigns to bring it to the bargaining table.

(AFM announced that it would be holding a press conference and protest action against Lionsgate scheduled for today, April 10, in front of Westwood’s Regency Village Theater in Los Angeles and timed for Draft Day’s national release.)

Composers agent Richard Kraft, of the Sherman Oaks boutique talent firm Kraft-Engel, represents some of the biggest names in the business. In addition to such marquee composers as Danny Elfman, Alan Menken, Graeme Revell and Alexandre Desplat, Kraft has Draft Day’s Debney in his musical stable.

Speaking to Capital & Main from Mexico City, where he was attending a concert by Elfman, Kraft describes another reason for job losses in the film-scoring industry. He argues it is AFM residuals that prevent L.A. from being “financially competitive” with a place like London, whose scoring musicians are unionized but receive no residuals.

“Under 60 films released last year were recorded by AFM in Los Angeles,” he says. “So all the other films weren’t AFM L.A. And only two movies were recorded AFM New York last year. So the issue is that the overwhelming majority of movies record non-AFM . . . because so many films refuse to pay the residuals, and no other orchestra in the world requires residuals. That is unique to America, and that is the primary reason recording goes overseas.”

It is precisely because of his concern over the dire straits of Hollywood’s historic scoring stages that Kraft says he started the organization Bring More Recording to Los Angeles.

“I am extraordinarily concerned about it,” he says. “In six years, the number of AFM films has dropped 50 percent. And if that trend continues, it’s unsustainable. Scoring stages are going to close down. It’s a very crucial time right now to reverse the trend.”

For his part, the plunge in Hollywood scoring has made Sazer grateful for what he’s got.

“You know, unlike the other guilds, we get nothing from box office, we get nothing from some of the other sources that other people do,” Sazer says. “We just only get money from the usual distribution of DVDs and those kinds of secondary markets. Nonetheless, if it weren’t for that, I would not be doing okay.”

Related Topics:American Federation of Musiciansoutsourcing
Up Next