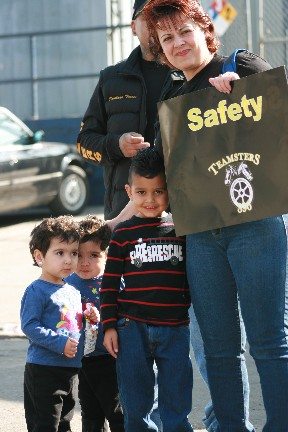 On October 12, 2011, in Lamont, California, Armando and Eladio Ramirez went into a composting drainage pipe, wearing only painters’ masks for protection – and breathed in fatal amounts of hydrogen sulfide.  Armando, 16 years old, went in first to clean out the pipe, and died almost immediately; Eladio, 22, went in after his brother to help him, and was rendered brain dead, dying the next day.

These deaths happened at a green waste processing facility run by Crown Disposal Services – a prominent player in L.A.’s commercial waste and recycling market – and are being investigated by Cal-OSHA, the CA Department of Labor and the United States Department of Labor.

Several weeks after Armando’s and Eladio’s deaths, a group of recycling sorters, waste hauling drivers and helpers filed a formal complaint with Cal-OSHA, chronicling a litany of severe health and safety violations taking place at American Reclamation, a waste and recycling company in Atwater Village that also plays a significant role in L.A.’s commercial waste and recycling industry.

How are these events connected?

Both companies are part of a Wild West industry in this region that gives rise to rogue, irresponsible players.  Irresponsibility in this industry translates into environmental degradation, neighborhood abuse – and injury and death.

While Cal-OSHA is now investigating American Reclamation as well as Crown, the Don’t Waste LA coalition isn’t waiting for inquiries or reports — the risks to our communities are too high. Last Thursday, LAANE, the Teamsters, NRDC, the L.A. County Federation of Labor, Pacoima Beautiful, CLUE and a host of other community, environmental and labor groups were joined by L.A. City Councilmembers Richard Alarcon and Eric Garcetti in rallying at American Reclamation.  The delegation marched to the doors of American Reclamation, demanding better health and safety conditions and calling for greater accountability and standards in L.A.’s commercial waste and recycling industry.

Simply put, we don’t want – and won’t tolerate – any more pain or death in this industry…and we’re not going away.

Accelerating the Recovery: The Economic Promise of Construction Careers