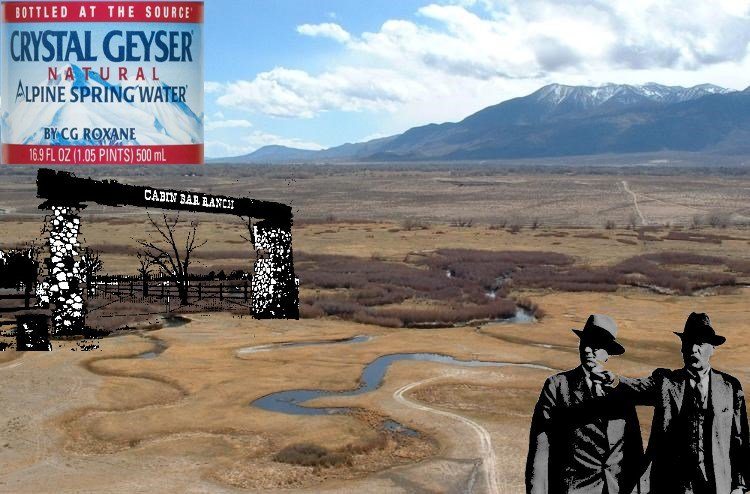 To the west of the Sierra Nevada Mountains, in California’s vast, dry San Joaquin Valley, a catastrophe is unfolding. Drought-stricken growers, deprived of surface water for irrigation, are pumping ancient aquifers at a rate that will eventually extinguish them forever, should the water shortage persist. About 120 miles away, on the opposite side of the snow-starved mountain range, sits the Owens Valley. Here, the drought is merely an aggravating factor in a water crisis that began more than a century ago. In 1913, William Mulholland and the Los Angeles Department of Water and Power completed the aqueduct that tapped the river that once irrigated the high desert basin and diverted it to the citrus groves of the San Fernando Valley, 200 miles to the south. Then in 1970, the LADWP completed its second aqueduct and began pumping the valley’s groundwater until all but a single major spring had run dry.

Now, Dustin Hardwick, Director of Resource Development at the California Rural Water Association, believes the situation may be even worse for local residents, due to a water bottling plant that is polluting the aquifer beneath it with arsenic and other toxic chemicals.

Over a decade ago, Hardwick worked in the plant, which is located in the unincorporated community of Olancha and owned by Crystal Geyser Roxane, the manufacturer of Crystal Geyser Alpine Spring Water. (The company’s general counsel did not respond to repeated requests for an interview.) Today, in addition to his job at the nonprofit trade group, he serves on the board of directors of the Cartago Mutual Water Company, which owns two wells and serves 43 residential customers in a town of 92 people adjacent to Olancha.

Hardwick had long assumed that the bottling plant, which has been in operation for more than 30 years, was subject to careful regulatory oversight, had its permits in order and its waste disposal methods up to industry standards. But in 2011, the Inyo County Planning Department hired a firm to produce an environmental impact report (EIR) on a property called Cabin Bar Ranch, a half-mile north of the Olancha plant, as part of Crystal Geyser’s application for a permit for the development of a new facility there. The EIR noted that the bottling company proposed to discharge chemical cleaning solutions at the new plant into a storm water pond, a practice that the State Water Resources Control Board suggested, in a letter in response to the EIR, was unlawful.

Hardwick and his colleagues at Cartago wondered whether Crystal Geyser was using similar waste disposal practices at the Olancha plant, and assigned a hydrogeologist to check on the plant’s permits. The hydrogeologist found that no permits had ever been issued for disposal of contaminants at Olancha. Cartago informed the State Water Resources Control Board of its findings and, in 2013, the state water board began an investigation.

The state’s investigation found that the Olancha plant had long been disposing its wastewater by collecting it in three ponds outside of the building. One, called the East  Pond, was a mere hole in the ground, allowing for wastewater to percolate directly into the earth. Wastewater contaminated by arsenic was diverted to the Arsenic Pond, which was insulated from the earth by a plastic liner, in which the inspectors found multiple holes and tears. The third pond was the Fire Pond — also lined, and designed to overflow into an adjacent wetland — which was there to help fight fires, in accordance with local fire codes.

The inspectors took groundwater samples in the immediate vicinity of the plant and found unsafe levels of arsenic, barium, beryllium, cadmium, chromium, lead, nickel, thallium and sulfate. The state water board’s report concluded that the plant’s “unauthorized waste discharges have caused groundwater quality to be degraded and polluted,” in violation of the region’s water quality control plan. (A separate consultant hired by Crystal Geyser Roxane contended that the contaminants “have not migrated off the Site property and should not impact neighboring water users or domestic wells.”) The Cartago Mutual Water Company is currently investigating how extensive the contamination is.

Despite this, the county planning commission pushed the approval process for the new plant forward: Inyo County is relatively poor, with a limited tax base, and the new plant means new jobs. In 2014, the County Board of Supervisors certified the EIR, and issued a Conditional Use Permit. Hardwick does not recall the county sending a single person out to look into the issue. Mark Bagley of the Sierra Club, whose organization filed a lawsuit, since resolved, against the development, agrees: “The county didn’t seem to be particularly concerned about doing anything about it,” he told Capital & Main.

Four decades before the Los Angeles Aqueduct drained the valley of its principal surface water source, Cartago was, briefly, a port town. A steamboat called the Bessie Brady would dock there in the 1870s after crossing Owens Lake from its northeastern shore to its southern tip. Fresh supplies from Los Angeles were hauled onto the boat for the miners in the mountains, and freshly excavated silver and lead were unloaded and packed onto a 14-mule team, to be brought back to the village on the Los Angeles River. At that time, the Owens Valley was flush with wealth and water, both originating in the mountains around it. L.A. prospered from one, and then from the other.

Today, Owens Lake is a dried-out salt flat, and the single largest source of dust pollution in the country. The valley’s surface water is gone, and, between the drought and the aqueduct, the groundwater is disappearing, too.

Hardwick says that his customers in Cartago, many of whom are retired and on fixed incomes, are fatalistic about what Crystal Geyser Roxane’s operations mean for their future. “I’ve had to field calls from residents,” he says. “The comment is, ‘Well, those guys have too much money and they’re just going to drive us out. We’re basically going to have no water and no option but to move.’”