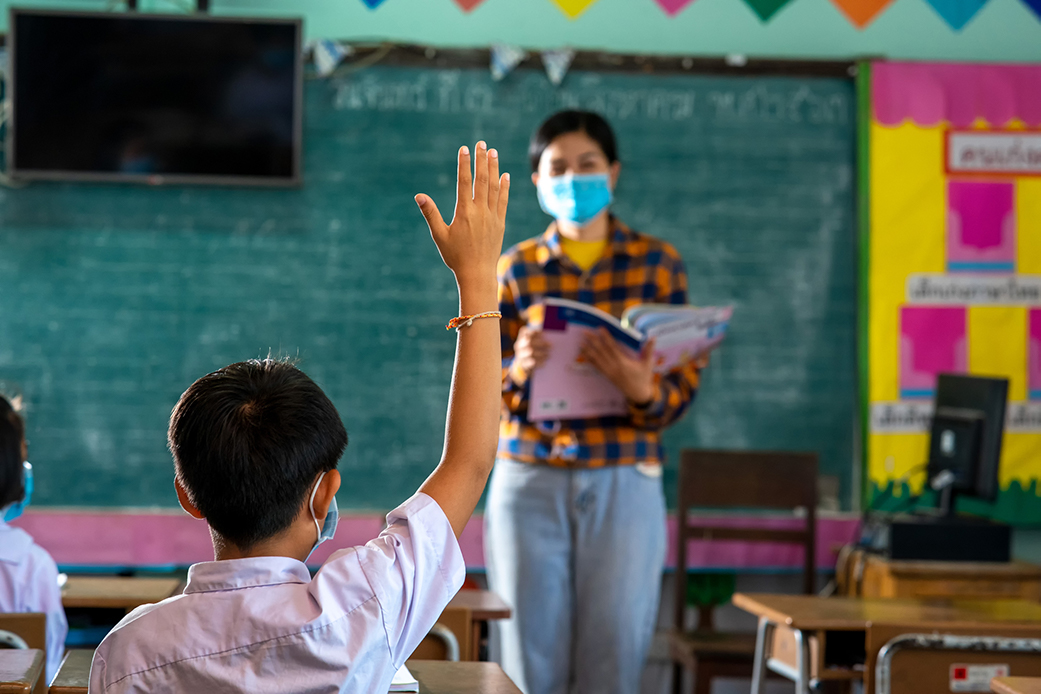 After weeks of watching COVID-19 case numbers fall, federal health officials this week provided an unambiguous update: That trend has been reversed. New cases of the disease are up 2.3% nationally, based on a seven-day average, and hospital admissions are up 2.7%, according to Dr. Rochelle Walensky, director of the Centers for Disease Control and Prevention (CDC).

Perhaps more worrisome than the raw numbers, though, are the demographics. “Across the country, we are hearing reports of clusters of cases associated with daycare centers and youth sports,” Walensky said at a White House press briefing Wednesday. “Hospitals are seeing more and more young adults — those in their 30s and 40s — admitted with severe disease.”

Newer variants of the virus, particularly the U.K. strain, or B.1.1.7, are spreading among children, according to Dr. Michael Osterholm, director of the Center for Infectious Disease Research and Policy at the University of Minnesota. In fact, Osterholm said, contagion among kids has caused him to revisit his own stance on school reopenings, which he previously supported.

In Michigan, infection rates skyrocketed after the state opened up schools and youth sports. Osterholm said more than 740 schools in Minnesota have cases of the U.K. variant, while Massachusetts officials reported that the state’s two highest case rates over the past two weeks are in the 15-19 and 20-29 age groups.

Among the COVID-19 specimens analyzed by the Los Angeles Department of Public Health last week, 64% were identified as the more contagious U.K. variety.

“Please understand, this B.1.1.7 variant is a brand-new ballgame,” Osterholm said on NBC’s Meet the Press. “It infects kids very readily, unlike previous strains of the virus. We didn’t see children under eighth grade get infected often, or they were not frequently very ill. They did not transmit to the rest of the community.”

So what do local school boards and state decision-makers do with this new information? In California, the answer appears to be to open up and see what happens.

In Los Angeles County on Wednesday, the Department of Public Health (LADPH) announced that among the COVID-19 specimens that were analyzed last week, 64% were of the U.K. variety. In all, 84% of specimens analyzed were labeled as “variants of concern, with the probability of increased transmissibility and more severe disease,” according to an LADPH statement.

Assuming the early findings of contagion among younger people continue to hold up, that points to a likely increase in case rates as schools continue to open and youth sports and gatherings become more commonplace. “We’re just at the beginning of this surge,” said Osterholm, speaking of the national picture. “We haven’t even really begun to see it yet.”

California’s test positivity rate was at 1.7% last week, the lowest in the nation, but the days since then have marked the first upticks recorded this year in the state’s seven-day rolling average. As of Thursday, that rate was up to 1.9%. Los Angeles County, which includes the 600,000-student L.A. Unified School District (LAUSD), the nation’s second largest, had a rate of 1.5% as of its most recent report on March 31.

This is all occurring as LAUSD begins a staggered reopening of both K-6 and secondary schools, with dozens set to begin in-person instruction next week. Up and down California, school districts are either about to open or have already done so. In every case, students have an option to remain in distance learning for the balance of the school year.

LAUSD Superintendent Austin Beutner has repeatedly said the district will closely monitor infection rates, as well as county guidance, as classrooms begin to house students. In negotiation with United Teachers Los Angeles (UTLA), the district also opted to maintain a 6 foot distance between students in class, even though the CDC in March relaxed its guidance to 3 feet, which would allow schools to put many more kids in each room. On Wednesday, a parent group filed a lawsuit against the district demanding, among other things, that it eliminate the 6 foot requirement.

In a CDC-sponsored survey of middle and high school students last fall, about 65% said their classmates wore a mask “all the time” in classrooms.

“The emergence of the U.K. variant that may be more able to infect children reaffirms our commitment to the 6 feet physical distancing policy that will be in place in L.A. schools,” UTLA President Cecily Myart-Cruz told Capital & Main. “The CDC’s erosion of safety standards to 3 feet flies in the face of overwhelming evidence that COVID is airborne.”

In either case, health and education officials say, effective masking is going to be a paramount concern until those of high school age and younger are able to receive vaccines. So far, the existing U.S. vaccines — Pfizer, Moderna and Johnson & Johnson — appear to be effective against the U.K., Brazil and South Africa mutations of the virus, but students aren’t on the priority list for doses.

“The 3 foot guidance (from the CDC) is still adequate even in the face of more transmissible variants, and this is because the data we have on masks is so incredibly reassuring,” Dr. Jeanne Noble, director of COVID-19 response for the UC San Francisco emergency department, said in an interview Thursday. “The bottom line is that in the context of universal masking, physical distancing adds no measurable benefit — it is simply a backup layer for breaches in masking and important during lunchtime or any other context in which masks come off.”

Masks are only effective if they’re worn. In a CDC-sponsored survey of nearly 4,000 middle and high school students conducted last fall, about 65% said their classmates wore a mask “all the time” in classrooms, hallways and stairwells at school, 40% in the restroom, 36% in the cafeteria when not eating, and in the 20s when playing sports or outside on school property.

For parents already skeptical about sending their children back for in person learning, even if only for a few days each week on a hybrid schedule, these kinds of numbers provide little encouragement. It could be one reason why, as of April 8, LAUSD estimated that less than half of responding families of elementary school students indicated a preference for in person learning. For middle schoolers it was 35%, and among high schoolers 25%.

California Gov. Gavin Newsom announced this week the state’s plan to begin opening up business as usual by June 15. It’s unclear whether classrooms will be fully open by the time the school year ends, which is about that same point on the calendar. According to data compiled by the Los Angeles Times, 62% of elementary school students statewide currently have the option to physically return to class, along with 37% of middle school and 39% of high school students. Each of the state’s 1,037 districts makes its own rules.

The U.K. variant so far has been both more transmissible and more dangerous than the original COVID-19 strain that the country battled over the past year. It’s roughly 60% more contagious and 67% more deadly than the original, and Walensky said it’s now the dominant strain of COVID-19 in the nation. Given those factors and the U.K. variant’s ability to infect kids, it’s a worrisome time.

On the other hand, “In-school transmission rates, in the presence of masking, are very close to zero,” Noble said. “They could go up a lot and schools would still be safer spaces than all the other aspects of our economy that are open.” The question now is whether the emergence of these variants will change that math to the point that schools can’t stay open, even if businesses do.