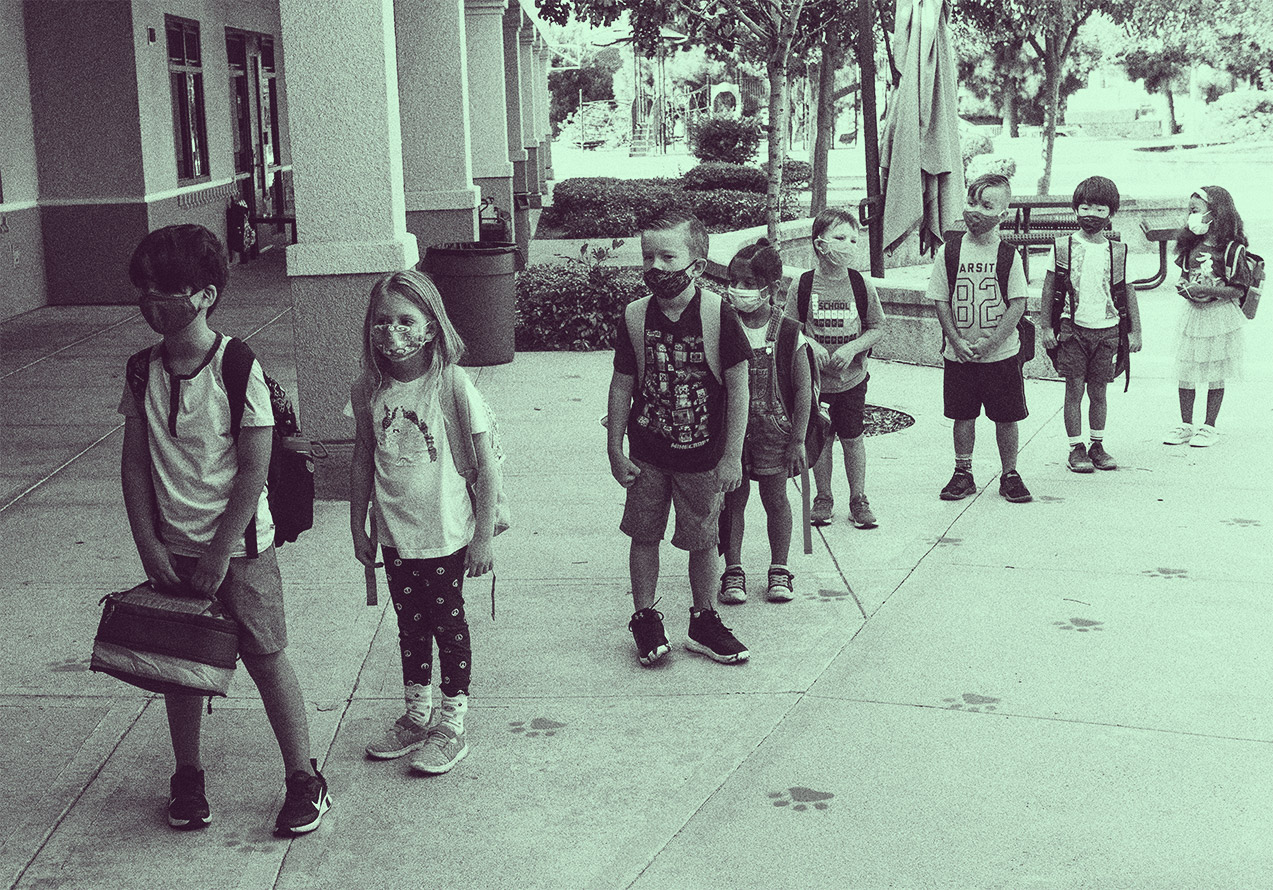 From the earliest stages of the coronavirus pandemic in the United States, the evidence pointed to one silver lining: Kids were thought to be in a safe harbor. They didn’t infect easily, the initial research indicated, and often their cases were so mild that neither they nor their families knew they were experiencing COVID-19.

But the dark progression of the highly transmissible Delta variant has obliterated much of last year’s confidence regarding kids and COVID, both in California and across the country. The rate of infection among children is skyrocketing, according to data compiled by the American Academy of Pediatrics, and the hospitalization rate is eclipsing peak levels recorded in January.

So serious is the concern that the AAP has urged the Food and Drug Administration to fast-track its eventual approval of vaccines for those under age 12. “In our view,” the AAP’s letter reads, “the rise of the Delta variant changes the risk-benefit analysis” of waiting four more months to see data from another round of clinical trials, which the FDA had requested of the drugmakers.

As schools across the country open to wildly varying degrees of local and state safety measures, and with no vaccine yet available, the risk modeling for children and COVID is changing in real time. These changing conditions may well affect the decisions being made by school boards, district supervisors and governors. There is also a deep inequity stake in the conversation, as the same people who have been pummeled by the disease — communities of color and lower income neighborhoods – will also bear the brunt of this latest wave of virus.

Here’s what we know, and what we don’t:

Pediatric cases are taking off. The AAP reported a staggering increase in cases of child COVID, going from 12,000 the first week in July to 96,000 the first week in August. The week ending July 29 marked the highest rate of infection per 100,000 children since the AAP began tracking the data in April of 2020. (In terms of raw numbers, infections remain well below their winter peaks.)

A perfect set of numbers doesn’t exist. As the academy notes, the age range for what constitutes a child varies from state to state, and some states stopped reporting regularly when case rates plummeted in June. Not all states report age distribution for hospitalizations or even deaths. But the available evidence leaves little doubt that pediatric COVID is currently on a sharp ascent.

Children in California are recording significant upticks in COVID rates, too. According to data analyzed by infectious disease epidemiologist George Lemp, the new case count for children nearly tripled in the last two weeks of July versus the two weeks prior, with a total of 13,757. In the two-week period ending July 24, Los Angeles County had 319 confirmed cases among children 11 and younger, according to county Public Health Director Barbara Ferrer — a huge jump from the 47 cases recorded for the same time period a month earlier.

A couple of troubling things are happening at once, experts say. The state’s broad reopening in June almost immediately resulted in higher rates of infection, and that trend has continued. Over the last two weeks, California has experienced a 40% increase in COVID cases and a 64% increase in hospitalizations. The increase in cases is well below the national average for that time frame, while the hospitalization rate change is about the same as the national average.

At the same time, Delta has become the dominant variant in both the state and the nation. Delta is more than twice as contagious as previous strains of COVID, according to the Centers for Disease Control and Prevention, and the infectiousness affects unvaccinated children and adults alike — but children under 12 don’t currently have a vaccine option. (More on that below.)

More kids are being hospitalized. Doctors and researchers say it’s still too early to tell whether Delta produces more virulent COVID cases for kids than previous versions of the disease. But hospital wards and ICUs tell a story about the caseload. From Aug. 5 to Aug. 11, the seven-day national average of new hospital pediatric COVID admissions was a record 263 per day, a 20% increase from the numbers seen during the winter peak.

“Everybody is a bit nervous about the possibility that the Delta variant could in fact be, in some way, more dangerous in kids,” Dr. Richard Malley, a pediatric infectious diseases expert at Boston Children’s Hospital, told the New York Times. At the least, Delta’s high transmission rate appears to be increasing the number of pediatric cases, researchers say.

As to the severity of recent children’s cases, the data is still being compiled. Linda Young, a respiratory therapist at Arkansas Children’s Hospital, observed that the children with COVID in that hospital’s packed ICU were reaching respiratory distress sooner and in more unpredictable patterns than previous pediatric patients. “I have never seen anything like this,” said Young.

A vaccine could come in weeks — or not for months. Part of the concern expressed in the AAP’s letter was that FDA officials recently urged both Pfizer and Moderna to roughly double the number of children ages 5 to 11 in their clinical trials to about 3,000. Such an addition, Academy President Dr. Lee Savio Beers says, would cost valuable time just when pediatric COVID cases are rapidly increasing.

“Waiting on a six-month follow-up [with the newly added subjects] will significantly hinder the ability to reduce the spread of the hyper-infectious COVID-19 Delta variant among this age group,” Beers wrote in the letter, addressed to acting FDA commissioner Dr. Janet Woodcock and released publicly. The AAP suggested that Woodcock “strongly consider” authorizing the vaccines based on results of those initially enrolled in the trials.

Even if a new cohort is not added to the study, Pfizer officials have said they don’t expect to have the results of their trial available until September. The FDA would then have to consider the data before rendering a decision on whether to issue an emergency use authorization for a vaccine for those ages 5 to 11, which takes in the overwhelming majority of elementary school students.

School reopening will drive infection rates upward. This is already occurring, especially in COVID hot spots in the South and Southeast.

Two days after opening school, the Palm Beach County School District placed 440 students in quarantine after confirming 108 COVID cases among students and another 26 among school staffers. The district requires masks to be worn inside school buildings, but parents may opt out  on behalf of their children. Mississippi, meanwhile, recorded 1,000 positive cases among students, and more than 5,000 students, staff and teachers were in quarantine; the state includes many districts with mask-optional policies.

“Unfortunately, the preliminary information coming from schools that have opened is that cases are immediately showing up,” Julie Swann, a systems engineering professor at North Carolina State University who specializes in health care delivery, tells Capital & Main. “And they are spreading within the school quickly if there is not masking.”

Modeling by Swann and her research team indicates that without proper masking and regular testing, up to 90% of an average elementary school’s students will become infected by the end of the fall semester. Masking and testing, used in concert, can prevent up to 80% of new infections, the research shows.

But it matters whether a mask is of high or low quality — and there are inherent inequities there, said Elaine Hernandez, a health sociologist at Indiana University. “Wealthy parents are scrambling for high quality masks because they know the Delta variant is more contagious, leaving poorer families behind again,” Hernandez said in an interview. “It really is a shame that the U.S. didn’t invest in higher quality masks for kids to make available to all.”

California schools are opening amid constantly changing guidance, with the state mandating mask use when inside school buildings but leaving the enforcement of such policies to local districts and school boards. Some of those districts have already made it clear they will not attempt to discipline students without masks.

Long COVID is looming. One of the great unknowns with the virus and children is what its lingering aftereffects may be. To this point, the vast number of pediatric COVID cases have been mild. But long COVID, so dubbed for the symptoms — muscle aches, brain fog, fatigue — that may persist for months or more, is a growing concern to researchers.

Studies estimate that between 10% and 30% of adults infected by the virus may face some form of long COVID. Scientists looking at pediatric cases have varied widely in such estimates for kids, with most falling somewhere in the 10% to 15% range, “which can be pretty devastating in terms of things like school performance,” said Dr. Francis Collins, director of the National Institutes for Health, during an April congressional hearing.

Still, the overwhelming concern among physicians and researchers is the here and now, with schools opening, mask policies subject to wide local variance, and children’s COVID cases on the rise. “It’s ridiculous,” said Dr. Charles Wayne Melvin of Tennessee Valley Pediatrics in Alabama. “We’re seeing many more positive kids, and the kids are much sicker this year than they were last year, too.”

Will Investing in Community Groups Keep Immigrants Out of Detention?