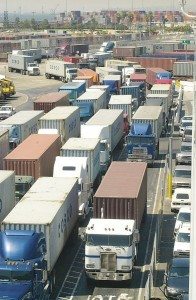 Last week, we reported on the legal struggle at port trucking company Seacon Logix, whose drivers filed claims with the California Division of Labor Standards Enforcement (DLSE) seeking reimbursement for a number of wage-and- hour violations, including illegal paycheck deductions made by the company. After the DLSE ruled in favor of the drivers in early 2012 – finding that the drivers were not independent contractors, but were actually misclassified employees – the company appealed the ruling.

On Thursday, a California Superior Court judge ruled in favor of the drivers in every respect, coming to the same conclusions as the DLSE. The court found that drivers were misclassified and ordered the company to pay the four drivers $107,802. Five additional drivers at the same company have similar claims pending.

This is the first in an anticipated wave of rulings addressing conditions for misclassified port truck drivers. Dozens of drivers working under very similar conditions at a range of port trucking companies have recently filed wage claims with the DLSE. Drivers at another company filed a class action suit over the same issues.

The Coalition for Clean and Safe Ports has long held that the vast majority of port drivers are misclassified, leading to widespread “wage theft” (as California Labor Commissioner Julie Su put it) and violation of basic workplace rights. (Frying Pan News has covered this issue extensively.) Last week’s ruling is one more indication that courts and governmental agencies are coming to the same conclusion.

Why the Chained Consumer Price Index Threatens Our Elderly