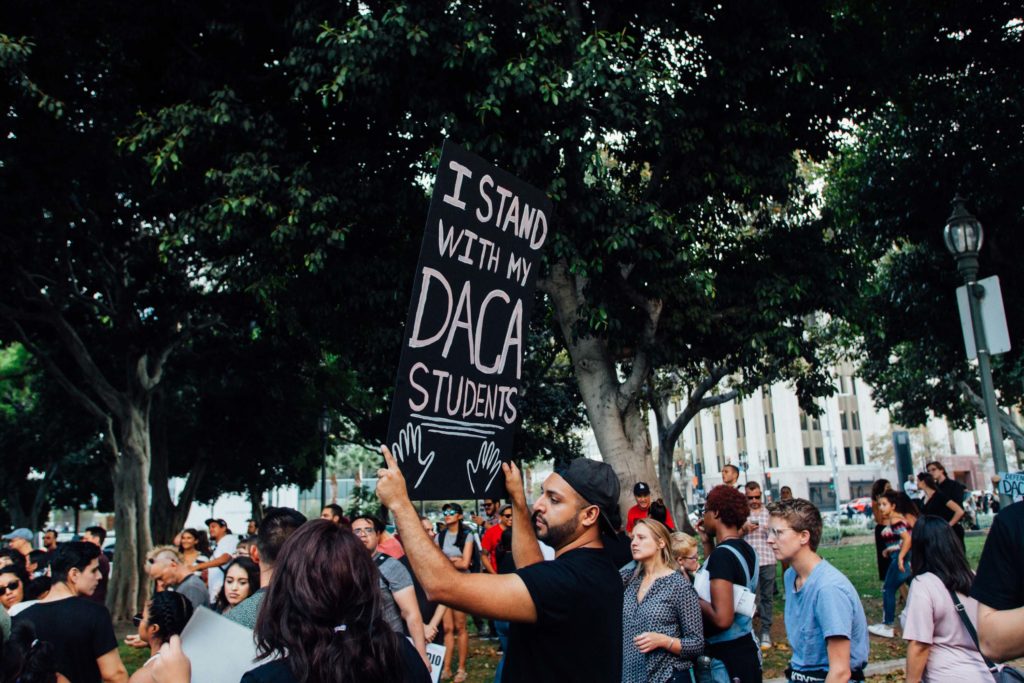 Celestina Mendoza (left) and Margarita Hurtado (right) protest in support of their friend Areli Chairez (center) who is a student and DACA recipient. (Photo: Joanne Kim)

Immigration Activist:
“There’s a false narrative that people are for the Dream Act.
We have been building a different movement.”

The day President Donald Trump announced he would rescind DACA – the Deferred Action for Childhood Arrivals program — some 50 young people, many of them directly affected by the move, gathered at the UCLA Labor Center on the western edge of MacArthur Park.

It was 5 p.m. and four whirring fans blew hot air around a steamy upstairs conference room. People mingled and some dug into pad Thai and hunks of fried tofu on paper plates.

A young woman was the first to speak. Asked for a one-word reaction to Trump’s announcement, she said, “Damn! But, duh.” As in, the president had played to type.

The MacArthur Park location was, ironically, a stone’s throw from L.A.’s notorious outdoor marketplace for fake IDs and ground zero for the subterranean economy into which the announcement threatened to thrust these mostly play-by-the-rules attendees.

Many in the room felt numb. Some were angry, fed up or annoyed. No one expressed surprise. Many, like 34-year-old Julieta Loreto, were veteran Dreamers who’d been fighting for the right to education and jobs. Loreto was a high school student when she had lobbied for Assembly Bill 540, the 2001 bill that granted her and other undocumented students in-state tuition at California state colleges and universities.

“I just went through the five stages of grief in one day, so I’m dizzy,” Loreto announced to the group.

She said her life had been on hold for a decade until she got DACA status four years ago. Now, she’s a newly minted registered nurse searching for work. But her plans to earn a bachelor’s degree and become a nurse practitioner are suspended once again.

“We seemed to be moving forward, but now we’re back to square one,” said John Perez, an organizer with the Immigrant Youth Coalition. Perez, who hosted the meeting, is wiry, full of kinetic energy and originally from Colombia. He rolled out an agenda on brown butcher paper that noted how break-out groups would follow the intros, including a “healing space,” and an action space. “I heal by doing shit,” Perez added.

One thing Perez won’t be doing: joining Congressional Democrats, California legislators and a host of immigrant-rights organizations in a push for the bipartisan Dream Act 2017, sponsored by senators Lindsey Graham (R-SC) and Dick Durbin (D-IL). The bill would offer permanent residency to young people who were younger than 18 when they came to the U.S. and who graduated from high school or earned a general education diploma, and can pass a background check.

“There’s a false narrative that people are for the Dream Act,” Perez said, speaking for his coalition the next day. “We have been building a different movement.”

Dream Act legislation would likely involve trade-offs, such as increased enforcement that could, Perez notes, get Dreamers’ loved ones tossed out of the country.

“If you ask a mother, ‘Do you want your kid to be safe or do you want to be safe?’ you know the answer,” said 29-year-old activist Neidi Dominguez. “But that mother, even if she did make a mistake, is equally important. It’s a terrible position they’ve always put us in.”

Dominguez, who grew up in L.A. and now lives in Washington DC, is credited with coming up with the original idea that then-President Barack Obama could take executive action to set up the DACA program, and with helping to push the administration to make it happen. Dominguez said she likes Durbin’s bill, but that before it comes to a vote  it’s almost certain to contain unacceptable sweeteners for Congressional immigration hawks.

“Settling and not fighting back against a bill that is 75 percent bad proves to this administration and politicians that we’re in their hands. We should not be playing to their tune. We need to be playing to ours.”

Indeed, some immigration hardliners see the Dream Act as an easy enough pill to swallow if it includes long-sought changes to the U.S. immigration system. “Every amnesty sends the message abroad that you can get away with it,” said Mark Krikorian, who heads the Center for Immigration Studies, which the Southern Poverty Law Center has branded a hate group. “You have to have enforcement measures to blunt that effect.”

Krikorian would like to see Congress make E-Verify, the federal online tool to determine employment eligibility, mandatory for all employers, cut legal immigration by half, reduce the flow of refugees and prioritize immigration of those with English skills, advanced degrees and money to invest in the United States. The latter three provisions are included in the RAISE (Reforming American Immigration for Strong Employment) Act, sponsored by Senate Republicans Tom Cotton of Texas and David Perdue of Georgia.

For their part, most pro-immigrant and progressive groups were quick to leap into the fray nearly as soon as Trump made his September 5 announcement. Victor Narro, a long-time immigrant rights activist and project director at the UCLA Labor Center, said the futures of 800,000 young people are at stake if there is no bill to replace DACA, which expires in six months. It’s important to avoid concessions that could hurt other immigrants, but, he said, “[Our] responsibility as advocates is to go into this process. The uncertainty is this is the most polarized Congress we’ve ever seen.”

The debate within the immigrant-rights movement over whether and how to engage legislatively goes back two decades, Narro said. He contended that ever since 9/11, compromise has become more onerous because of the increased focus on national security: “The problem is you include surveillance, employment verification — it’s not healthy.”

DACA advocates need an initial groundswell of support, Narro said. But even then, there are no guarantees.

“The lives of immigrant youth are not a bargaining chip,” said the National Immigration Law Center in an online statement. The Campaign for Humane Immigrant Rights of Los Angeles (CHIRLA) also argued on its website that the Dream Act was the solution to Trump’s decision to rescind DACA. “We will support clean legislation that does not throw our loved ones, our family, under the bus,” its message noted. Less than a week after the president’s announcement, Moveon.org had already collected nearly 250,000 online signatures urging support for a stand-alone bill.

“It’s very terrifying knowing I can be deported,” Montoya said. “I have a little brother, who’s seven years younger, who also has DACA.” In addition to lobbying, Montoya’s group is warning DACA recipients against immigration scams and pushing those whose benefits expire before March 5, 2018 to renew before the October 5 deadline.

The strategic divide over legislation reflects a cultural difference between people like Neidi Dominguez and more established groups. Dominguez, who is now a legal resident and whose sister is a DACA recipient, said she and other Dreamers took big personal leaps of faith by declaring their at-the-time undocumented status and risking arrest and deportation with sit-ins and other civil disobedience tactics. Dominguez said she and her colleagues borrowed from the nonviolent direct action tactics of the civil rights movement, and they learned that it didn’t always pay to listen to established groups.

She said she and other Dreamers won DACA by defying conventional wisdom. When they proposed DACA, the Obama administration countered that the president lacked the authority to act to protect the Dreamers. The activists and the White House were at a stalemate when, in the thick of the 2012 presidential race, Dominguez and her comrades got a call from Obama officials who invited them to Washington DC for a meeting. Dominguez said she didn’t think the administration intended a serious discussion. Still, she and three other women with Dream Team L.A. – all undocumented at the time — made the trip, and strategized how to make the meeting work for them. They leaked the DC trip to La Opinion, L.A.’s Spanish-language daily, even though Obama officials warned them not to, and by the end of the meeting, they’d informed the administration officials of the leak, issued a threat and set a deadline. If Obama didn’t come back with a DACA-like program in two weeks, the Dreamers would sit-in at Obama for America campaign offices across the country.

“Less than five days later, they caved,” Dominguez said of administration officials, despite their annoyance. “It’s shocking to tell this story, and knowing this week it got terminated. It’s just surreal.”

Today Dominguez, who works as the national strategic campaign coordinator for the International Union of Painters and Allied Trades, doesn’t see an immediate viable strategy for restoring DACA protection, short of Trump reinstating the program. Instead, she believes immigrant-rights activists should organize for 2020. “I mean, in 2020 we have a real shot at getting rid of all of them,” she said, referring to the Trump administration and the Republican-dominated Congress.