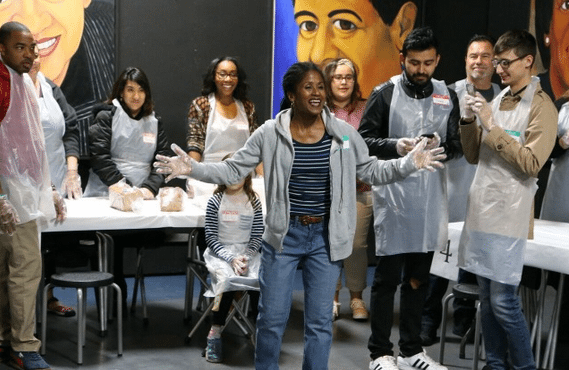 Bahni Turpin as Regina, with ensemble and audience members. (Photo by Brian Biery)

The Merriam-Webster dictionary defines fellowship in various ways: as companionship, as a community of interest or experience, as a company of equals or friends, among others. These definitions serve as prologue to Julie Marie Myatt’s immersive stage play, fellowship: a play for volunteers, a Cornerstone Theater Company production, directed by Peter Howard, in which audience members are called on to be volunteers who prepare lunches for the hungry in Los Angeles. As drama, the play is unmemorable, but the way in which the piece makes its point — that point being the responsibility of each of us has to take care of our neighbors — is singular and hits home.

The show plays at various sites throughout L.A. County: I attended a performance at the Pico Union Project, held in an old church, with a high vaulted ceiling and stained-glass windows.

At the opening, we hear the piped-in sounds of Sly and the Family Stone’s “Ordinary People,” while ensemble members distribute disposable aprons and gloves, the first step to preparing the lunches: turkey and cheese sandwiches, accompanied by fruit, a snack, a bottle of water and, not insignificantly, a note of encouragement to the recipient (written by volunteers) to bolster their self-respect. Everything is done in steps, including decorating the lunch bags with crayons (reminiscent of art period in third grade), the composing of the notes, the sealing of the bags with a cheery sticker. When you participate, you work with other audience members you don’t know, and with whom you develop a transient camaraderie as you work to complete a task.

A play about hunger is ongoing while the lunch prep takes place. The performers portray a fictional group of volunteers drawn together by their work, each with a story about food or hunger in their background. Roscoe (Marcenus “M.C.” Earl) grew up in a home that opened its doors to feed everyone, however spare the family budget might be. Rachel’s (Michelle DeRosa) mom would watch her eat but often, when there wasn’t enough food, would tell her daughter that she would “eat later.” Regina (Bahni Turpin) recalls staring in amazement at a bowl of fruit on the table of some household more affluent than her own, wondering at the excess that allowed the household’s members to let it just sit there. One person, Roy (Matthew Ramos), has never known want; he is volunteering as part of his “community service,” and his ignorance about want serves as a foil for the others.

Now and then there’s a song to provide inspiration — “Lean on Me,” “Move on Up,” “Let the Sun Shine In” — and at some point “Hunger” appears in the form of a large puppet with a big silvery head and huge groping hands, and each of the performers interacts with it to some symbolic end.

None of this is likely to impress a seasoned theatergoer, but then again the aim here is not to effect high drama but to make a point about community and respect. If the piece and its execution aren’t exactly gripping, the message — represented by newly bagged lunches arrayed atop the tables where we the theatergoers assembled them — comes through loud and clear.

This Is How People Make History: Greensboro, 1960