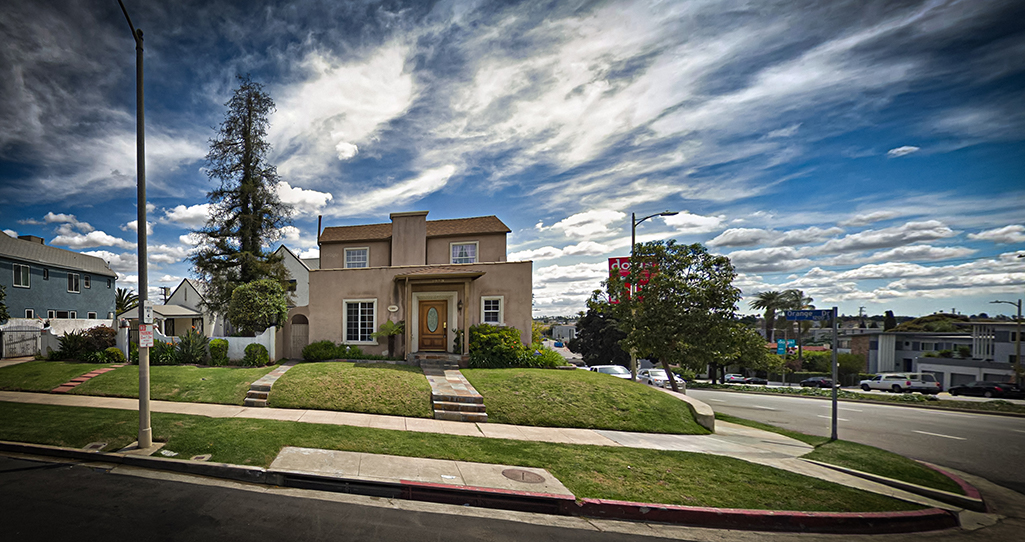 Despite being subject to the L.A. Rent Stabilization Ordinance, this duplex at 1288 S. Orange Drive is listed on multiple home-sharing platforms.

In December 2018, Los Angeles passed the Home-Sharing Ordinance, which aims to prevent the city’s supply of affordable housing from being used for short-term rentals on websites such as Airbnb, Vrbo and HomeAway. However, current online listings raise questions about whether Airbnb and other services are complying with the law, and whether the city is doing enough to enforce it.

Among several new regulations for short-term rentals — meaning those lasting fewer than 31 days — the law bans units that are subject to L.A.’s Rent Stabilization Ordinance (RSO) from being listed on Airbnb and similar sites, restricts eligible short-term rental properties to primary residences, and limits listings to one per host. Hosts who meet all of the necessary criteria must now register with the city and pay an annual fee of $89. While the law banning short-term stays in RSO units went into effect on July 1, 2019, Los Angeles delayed enforcing it until November 1, giving qualified hosts the chance to register. Short-term rentals in the city that are advertised on sites like Airbnb must now post a permit number on the listing.

However, according to Randy Renick of the law firm Hadsell Stormer Renick & Dai, rent-controlled units are still listed on the internet for short-term use instead of being returned to the long-term housing supply. Renick’s practice, which takes cases related to housing law, is filing a complaint with the Department of City Planning alleging that the city is not adequately enforcing the law. “There was going to be a glut available of affordable units. Except it turns out that Airbnb didn’t stop renting them and the city didn’t do anything about enforcing it,” Renick told Capital & Main.

Because a reservation is needed to see the address of an Airbnb listing, Renick and his firm used a private investigator to book stays in several short-term rentals to verify that they are subject to the RSO. They identified several properties across the city that appear to be in violation of the law.

The complaint also points out how Los Angeles has lagged behind other cities, including West Hollywood and Santa Monica, in adopting short-term rental regulations, and questions the logic of having waited until November 1 to enforce the ban, since would-be hosts with RSO units are blocked outright from listing those properties, and have no need to register.

The Home-Sharing Ordinance comes in response to Los Angeles’ severe shortage of affordable housing, a problem that some residents and lawmakers say the short-term rental industry is exacerbating. At a December 2018 City Council meeting, Councilmember Mike Bonin, who first proposed the Home-Sharing Ordinance in 2015 along with Council President Herb Wesson, decried the “phenomenon of de facto hotels coming in, evicting larger numbers of people, having a tremendous impact upon the rental inventory in a number of communities.” Trinidad Ruiz of the Los Angeles Tenants Union, a housing advocacy group, also spoke to the law’s importance in an email to Capital & Main, stating, “L.A.’s Home-Sharing Ordinance is desperately needed regulation.”

The city’s Home-Sharing Master Platform Agreement says that short-term rental companies are responsible for removing prohibited listings from their websites, while hosts who violate the law are charged “per night fines of $500 or double the nightly rate being charged, whichever is greater.” According to Renick, “The ordinance is violated just by a posting.”

When asked about its role in enforcing the Home-Sharing Ordinance, and whether the company is aware of rent controlled units listed on its website, Airbnb offered a press release emphasizing that it is building “an online system that will streamline the registration process for hosts, promote compliance and automate enforcement.”

However, Airbnb is already looking to loosen regulations around home-sharing, stating on its website, “Airbnb continues to advocate for reasonable regulations that address short-term rentals in non-primary residences and as a result, the City has taken the first steps of drafting an ordinance that would regulate second homes and vacation rentals.” In October, L.A.’s Planning and Land Use Management Committee recommended a pilot program to legalize short-term rentals in owner-occupied RSO units.

But housing advocates, like Cynthia Strathmann of activist group Strategic Actions for a Just Economy (SAJE), are wary of developments that could weaken the city’s efforts to keep affordable housing available for residents. “The City has only recently started to enforce the Home-Sharing Ordinance, and we need to make sure the ordinance is being fully implemented and assess its impact before we pass additional related legislation, like a vacation rental ordinance that could potentially undermine the Home-Sharing Ordinance’s effectiveness,” she told Capital & Main.

After the Turkey: Giving Thanks Every Day