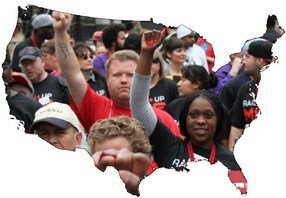 Of all the commemorations of the March on Washington, the one that will best capture its spirit isn’t really a commemoration at all. Thursday, one day after the 50th anniversary of the great march, fast-food and retail workers in as many as 35 cities will stage a one-day strike demanding higher wages.

Sadly, the connection between the epochal demonstration of 1963 and a fast-food strike in 2013 couldn’t be more direct.

The march 50 years ago was, after all, a march “For Jobs and Freedom,” and its focus was every bit as economic as it was juridical and social. Even more directly, one of the demands highlighted by the march’s leaders and organizers was to raise the federal minimum wage — then $1.15 an hour — to $2. According to Sylvia Allegretto and Steven Pitts of the Economic Policy Institute, that comes out to $13.39 today. (This week, fast-food workers will march seeking an hourly wage of $15.)

Those who seek to conservatize the march in modern memory either gloss over or neglect altogether its consistent emphasis on economic as well as social egalitarianism. A. Philip Randolph, the union leader and lifelong democratic socialist who conceived of and chaired the march, made this clear in the speech with which he began the rally. “Yes, we want all public accommodations open to all citizens,” he said, “but those accommodations will mean little to those who cannot afford to use them. Yes, we want a Fair Employment Practice Act [banning racial discrimination in hiring], but what good will it do if profit-geared automation destroys the jobs of millions of workers, black and white?” (Randolph’s fears about the economic implications of mechanizing manufacturing, which today sound grimly prophetic, were shared by many in his circle, including such social democratic activists and economists as Michael Harrington and Leon Keyserling.)

As two excellent new books about the march and the men and women who made it happen — “The March on Washington” by William P. Jones and “A Freedom Budget for All Americans” by Paul Le Blanc and Michael D. Yates — make clear, the march was initially conceived in late 1962 primarily to spotlight the growing unemployment, underemployment and job discrimination plaguing African Americans in northern cities. Only when all hell broke loose in Birmingham, Ala., in the spring of 1963 — with Bull Connor loosing attack dogs on black schoolchildren demonstrating for equal access to public accommodations — did the focus of the march expand to the civil rights demands with which it is linked in popular memory today.

Of the more than 200,000 Americans who came to the Mall 50 years ago, tens of thousands were active in organizations that espoused and embodied an indissoluble link between civil and economic rights. That link was embraced by more than black churches and the NAACP. The United Auto Workers, garment and textile workers, the Packinghouse Workers and the still-fledgling teacher and public worker unions brought their members to Washington on hundreds of chartered buses and trains. They heard speeches not only declaring that Southern blacks should have the right to vote and to sit at the front of the bus but also calling for public employment programs to shrink unemployment and a hike in the minimum wage to reduce the incidence of poverty-level work.

Commemorating the march is altogether fitting and proper, but the activists who planned, organized and spoke at the rally would surely think that the most faithful way to honor their work would be to continue it. That’s what Rep. John Lewis, the last surviving speaker from that rally, is doing when he fights to resecure the voting rights of minorities and the young, which the five Republican-appointed Supreme Court justices have imperiled in weakening the Voting Rights Act. That’s what President Obama is doing in championing a raise in the minimum wage — indeed, it’s what more than 100 municipalities have done in enacting local living-wage ordinances. It’s what the D.C. Council did when it recently passed an ordinance setting a minimum wage of $12.50 for employees of big-box stores. (If Mayor Vincent C. Gray (D) vetoes that ordinance, he should at least explain why a wage level that, adjusted for inflation, is beneath that demanded at the march is somehow too high today.) And it’s what retail and fast-food workers across America will do Thursday, when they demonstrate for the kind of economic justice to which march leaders and participants were showing their commitment when they came to the Mall 50 years ago.

I, Worker: What Robots Cannot Replace