Fifty years ago this month, on July 30, 1965, President Lyndon Johnson signed into law an amendment to the Social Security Act that established Medicare, providing health insurance to people 65 and older regardless of income or medical history, and dramatically changed the landscape of senior health care for the better. As we celebrate this important anniversary, all of us should take a moment to consider how Medicare, the nation’s most successful and efficient health insurance program, continues to protect millions of seniors who might otherwise live without adequate health care or who might face bankruptcy because of medical bills.

As Medicare has been weaved into the fabric of our society, it’s hard to fathom a time when America placed its aging population at such risk, but prior to Medicare only 50 percent of Americans 65 and older had health insurance, and more than a third lived in poverty.

Although union members and seniors worked hard to make Medicare a reality, the final credit certainly goes to President Johnson. Getting Medicare passed was a multi-decade effort. It started with President Franklin D. Roosevelt during the Great Depression, who advocated inclusion of a national health insurance component in his Social Security Act of 1935, but was forced to drop it to avoid jeopardizing the bill’s passage. Presidents Truman and Kennedy also sent senior health bills to Congress, but they were blocked in committees. It took Johnson and his political capital to get the law signed. Equally important, the law also had the significant effect of desegregating hundreds of hospitals, a requirement for receiving funding under the program.

Today there are more than 54 million people enrolled in Medicare. Since its inception, the program has grown stronger and expanded to include things like disability coverage to those under 65, home health care, and prescription drug coverage. Whether we are of eligible age, virtually everyone reading this has some connection to someone whose life has been made better because of Medicare. 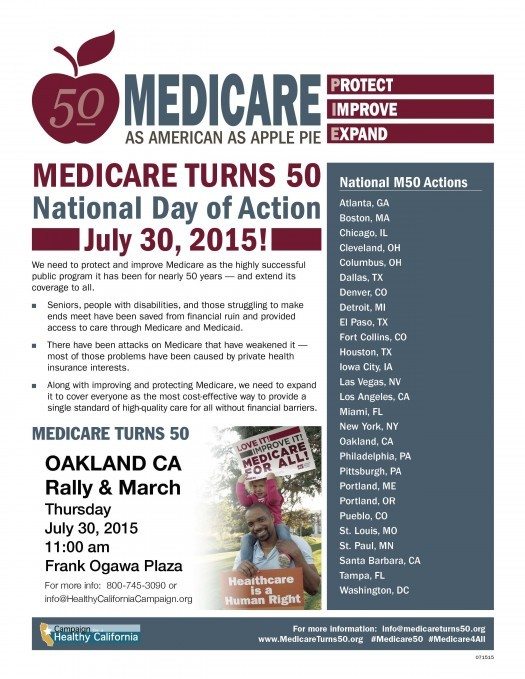 Unfortunately, and despite Medicare being the most popular and efficiently run health program in our nation’s history, there are still lawmakers in Washington who seek to dismantle it by cutting benefits, raising the eligibility age, increasing current copays and deductibles, or radically transforming Medicare into a voucher program that would shift major cost risks to aging patients. This is not something America’s seniors want, nor is it what they deserve. At a time when most of us are celebrating a bill that has enhanced the quality of life for millions of aging Americans, there are politicians looking for ways to metaphorically, and in some cases literally, pull the plug on them.

This anniversary is a time for all of us to stand up to those attacks and to let Congress know that we strongly support Medicare for all. In another fifteen years, the people born the year the law was signed will themselves be eligible for Medicare. Let’s not go back on a promise made to them the day they were born, and instead celebrate this milestone with a new commitment to strengthening, protecting, and expanding Medicare for decades to come. Happy Birthday, Medicare. And many more.

There will be events all across the country Thursday, celebrating Medicare’s 50th and advocating for its protection and expansion. Join us at the Oakland and Los Angeles events, or find one in your area at www.medicareturns50.org.

ALEC Watchdog: Jane Carter on the Right-Wing Lobbyists Trying to Rewrite the Constitution

This Thursday: Medicare is Having a Birthday Party