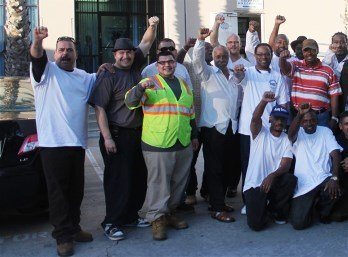 The trucking industry likes to say, “If you have it, a truck brought it.” The industry’s point is that trucking is an essential and ubiquitous part of our economy.

This is true, so far as it goes. But trucks don’t drive themselves. And so at a recent meeting of the Carson City Council, a slightly different message was on display: If you want a good job, you’re no longer likely to find it in port trucking – at least not without a fight.

Carson, located 10 minutes north of Los Angeles’ harbor, is a major hub of port trucking: Fifty-two port trucking companies operate there — more than in any other Southern California city except L.A. and Long Beach; hundreds of truck drivers call Carson home and more than 1,000 port trucks are parked in town. The conditions of the industry impact the city profoundly — from road safety to environmental quality to jobs to tax revenue.

One thing the trucking industry is right about, judging from comments made by Carson officials and by community members, is the ubiquity of the trucking industry. But it’s not that we all have a connection with trucks, it’s that so many of us have connections with truck drivers. These connections, as many testified in Carson, make us painfully aware of the large gap between the promise of the industry and the reality.

Drivers from two Carson-based trucking companies – American Logistics International and Green Fleet Systems – spoke eloquently about the challenges they face in providing quality service and supporting their families, as well as the retaliation they have faced from their employers after announcing their intentions to form a union. But some of the most compelling testimony came not just from current truck drivers, but from those who knew drivers and the dangers of working non-union.

Community activist Charles Prinzen, a 78-year-old retiree and 55-year Teamster member, spoke about the changes he’s seen in the ports. Referring to the Pledge of Allegiance that started the Council meeting, Mr. Prinzen observed:

After organizing with the Teamsters, Mr. Prinzen eventually saw things change for the better. “I will sweat with you, I will bleed with you, I will make your company strong,” the workers’ promise went, so long as they were respected.

Bishop W. Todd Ervin spoke about his time as a former truck driver. Along with his father, he owned a Carson trucking company from the 1960s into the 1980s, when trucking deregulation led to a reliance on independent contractors. The post-deregulation race to the bottom destroyed their business, along with many other responsible companies. Now, in order to get work, most truck drivers have to pay for their company’s trucks, and all of the associated expenses – fuel, insurance, maintenance and repairs – turning the industry into “modern-day sharecropping,” as Bishop Ervin explained, where workers make enough to scrape by, but not enough to get ahead.

David Greene, another community activist, witnessed last year’s struggle at the Toll Group, where port truck drivers successfully formed a union after a year of conflict: “During that fight, some of those employees were fired, they were harassed, they were threatened, they were spied on.” He knew first-hand the importance to the drivers of community support, and wanted to ensure the drivers currently organizing would not have to run the same gauntlet.

The Councilmembers themselves had striking connections to the trucking industry and to the issues that drivers face. Councilmember Mike Gipson – the author of a resolution in support of port truck drivers – recounted his recent meeting with drivers at Green Fleet Systems. On the same day that he had met with them, his father – a 47-year truck driver – turned 81 years old. When Councilmember Gipson was a child, he remembered, his father was forced to strike:

“Our lights were cut off. We got an eviction notice. It was hard to make ends meet for those 19 days. But when the men walked back into the yard and regained their jobs, we had decent wages and benefits, we had medical coverage, we had dental, and we had a right to have a voice in the workplace.”

Perhaps the most moving testimony of the night came from Mayor Jim Dear, who told a Depression-era story about his father to explain his “vested and emotional and intellectual interest in the welfare of workers in America.” While adjusting the equipment in a non-union printing company in 1936, Mayor Dear’s father’s hand was caught in the machinery. It was mangled, and later amputated. “When he came back from the hospital, they fired him from the job . . . They told him they would not fire him if he would sign a form [declaring] that he wouldn’t sue them.”

With one abstention for procedural reasons (the abstaining Councilmember assured drivers he would “join them on any picket line”), the Carson resolution passed unanimously.

Why Aren’t Unions More Appealing to the Public?