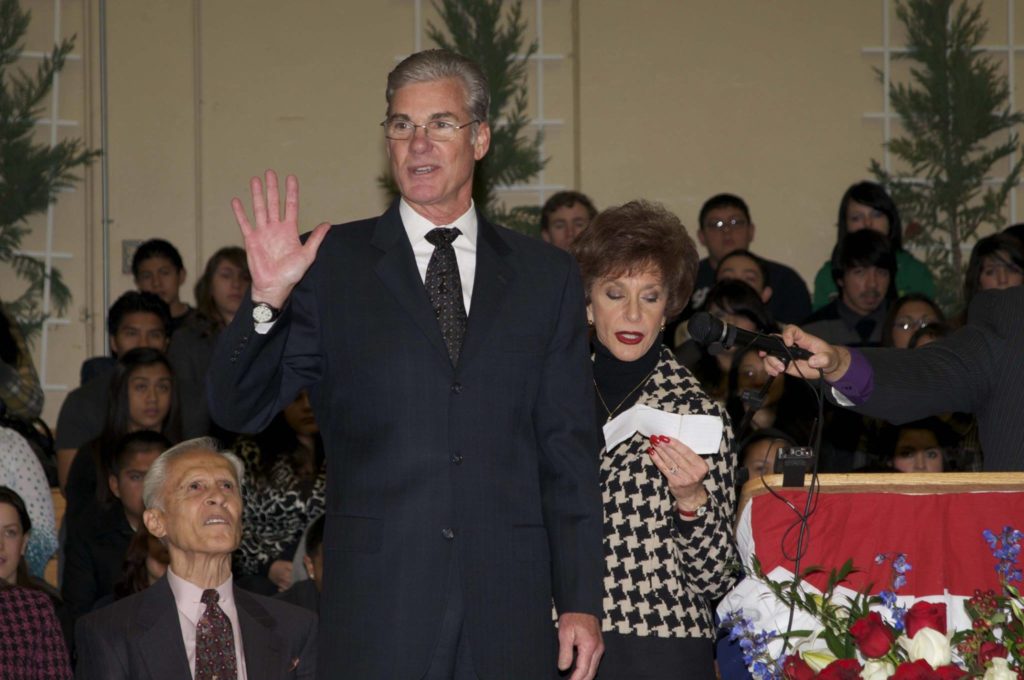 What makes the superintendent far more than a glorified administrator is the authority that comes with a popularly elected mandate.

The most persuasive evidence that the California Dream is rooted in Enlightenment notions of free public education, democratic governance and equity can be found in the state’s founding document. Not only does the 1849 Constitution sketch out the contours of public schools, accountability, a funding mechanism and a Department of Education, but the framers stipulate that it be led by an elected State Superintendent of Public Instruction (SPI).

Fast-forward 169 years to the election of a new superintendent and the latest test of California’s commitment to its foundational cornerstone. The stakes are high. Though California spends 40 percent (or $56 billion) of its $138 billion budget on its six-million student public school system, the past four decades have seen the state slip from among the top-five states for school funding to consistently ranking in the bottom five. Whoever is elected on November 6 will have a historic opportunity to correct the course of a system in which the public good has increasingly been compromised by the competing demands of private interest.

What, exactly, does the superintendent do? The political shorthand typically describes the $175,000-a-year position as Sacramento’s elected equivalent to Betsy DeVos, the Trump-appointed U.S. Secretary of Education.

The superintendent can use the post’s bully pulpit to act as a super-lobbyist
on behalf of students.

On paper, the SPI interprets regulations, sets curriculum and teaching standards, collects school accountability data and manages the day-to-day business of the sprawling California Department of Education. The superintendent is thus an implementer but not a maker of policy — which is the bailiwick of the governor and his appointed president of the State Board of Education.

But those roles represent a great deal of power, and not just for their direct impact on California students and their families. Jack O’Connell, whose two-term tenure as schools superintendent immediately preceded Tom Torlakson’s election as superintendent in 2010, says the sheer size of the California Department of Education means that decisions by its superintendent reverberate far beyond state borders.

“There’s an organization that all 50 state superintendents belong to,” notes O’Connell, “and there’s a line on their agenda — ‘Hey California, what’s happening?’ Because [we’re doing] what’s going to come next [elsewhere]. So when we start requiring algebra in eighth grade, textbook companies are going to start putting algebra in eighth grade, and those are the same textbooks that other states are going to use.”

What ultimately makes the SPI far more than a glorified administrator or compliance officer is the authority that comes from having a mandate. Unlike the 37 states that follow the federal model by appointing the chief executive of their education agencies, California is among a select group that gives voters the final say. Winning a statewide election translates into power, says Julian Vasquez Heilig, a professor of educational leadership and policy studies, and the director of the Doctorate in Educational Leadership at California State University, Sacramento.

“You look at other states, like Texas, [where] the Commissioner of Education is appointed. This position is different,” Heilig explains. “The Superintendent of Public Instruction is not beholden to the governor but is setting an agenda for education. So it’s a really important office. Teacher associations have [the superintendent race] as one of their top priorities, because they understand the sort of independence that this elected official has.”

That institutional independence, plus the opportunities afforded by the SPI’s automatic seat on the State Board of Education, has evolved into an almost mystical power of personal persuasion. Superintendents often refer to it as “the bully pulpit,” though during the 1960s, that term was realized in its worst sense — when populist Republican segregationist Max L. Rafferty used his pulpit for declaring war on the counterculture, and became a national figure in the process.

In its best sense, however, the SPI can use those powers of persuasion and independence to act as a kind of super-lobbyist and coalition-builder from inside or outside the state schools bureaucracy to advocate for students. Democrat Bill Honig, who spent a decade in the job from 1983 to 1993, was renowned for his public battles with Republican Governor George Deukmejian. In 1990, that meant organizing a statewide resistance against Deukmejian’s attempted cut of $800 million from the schools. Honig calls it the “convening power,” and he credits Torlakson’s mastery of it, in tandem with Jerry Brown, for transformative changes like Local Control Funding Formulas, alternative school-accountability measures and bringing Common Core to California.

“This is a very complex educational system in California, with local school districts and boards, and teachers, unions, counties, the Department of Ed and the State Board,” Honig says. “I mean, there’s a lot of moving parts. When we are the most effective is when we’re moving in a common direction under a common philosophy, and that’s what’s happened in the last eight years under Brown and [board president] Michael Kirst and Tom Torlakson.”

Democrat Delaine Eastin concurs. State schools superintendent from 1995 to 2003, Eastin had to operate under both the governorships of Republican Pete Wilson and Democrat Gray Davis. It was under Wilson that she similarly found herself politically isolated and facing a hostile governor, who she also had to sue for illegally withholding money from schools. She adds, however, that effective independence can also depend on the determination of the individual occupying the office.

The superintendent race has already attracted the inflationary levels of campaign spending by education PACs and independent expenditure committees that critics say is rattling the integrity of California elections. But the June gubernatorial primary reached a new spending height with a political belly flop that was solely the work of a PAC controlled by the California Charter Schools Association (CCSA). In a failed attempt to boost the election hopes of pro-charter candidate Antonio Villaraigosa, the charter lobbying group dropped $22 million into the former Los Angeles mayor’s flagging campaign against Lieutenant Governor Gavin Newsom.

Now, five weeks out from the general election, the only option open for charter school forces is to repeat that performance by pulling out the money stops in the superintendent’s race, where Marshall Tuck, a former Los Angeles charter school operator in his second run for superintendent, is facing teachers-backed Tony Thurmond, a progressive Assemblymember and former social worker from Richmond. The two Democrats finished the primary with Tuck barely edging out Thurmond, 37 to 35.6 percent. Although officially nonpartisan, the PAC spending makes the race the latest proxy for the broader battle between progressives and neoliberals for the soul of California’s fractious Democratic Party.

Because charters are ground zero for that fight in California education, it’s little surprise that Tuck and Thurmond’s sharpest differences revolve around fixes to the state’s deeply divisive charter school law. Public schools have long complained that the law’s authorization and funding mechanisms doom struggling schools and push fiscally stressed districts into insolvency. Thurmond has said he’d consider supporting a “pause” to new charters; Tuck has flatly rejected any brake to charter expansion but would give extra funding to districts hemorrhaging enrollment to keep them afloat during downsizing.

The issue has made Superintendent the only non-ballot initiative race to make the California Fair Political Practices Commission website’s “Top Ten” list of heaviest PAC spending for the general election. Recent filings with California Secretary of State show the Tuck campaign far out front in the super-PAC money race, with Tuck at $14.3 million, mostly from EdVoice for the Kids PAC, a charter PAC associated with Reed Hastings, the billionaire Netflix CEO and a major charter school funder. The Thurmond campaign stands at roughly $5 million, mostly from unions. (Disclosure: Some of Thurmond’s campaign contributors are financial supporters of this website.)

At the end of the day, the effectiveness of any superintendent hinges on an ability to strike an amicable working partnership with the State Board of Education and the governor — to move an agenda in “a common direction” under a common philosophy. And if bad blood left by the charter lobby’s bare-knuckle primary campaign against Gavin Newsom should mean that a Superintendent Tuck wouldn’t be off to a running start with a Governor Newsom, there’s still plenty of common ground between the two camps on school funding, early education, California’s teacher crisis and closing the achievement gap.

But whoever wins, there remains a unique opportunity for a superintendent and governor on the same philosophical page to change the paradigm for reform and bring peace to a destructive quarter-century of charter-versus-public school warfare that has come mostly at the expense of students.