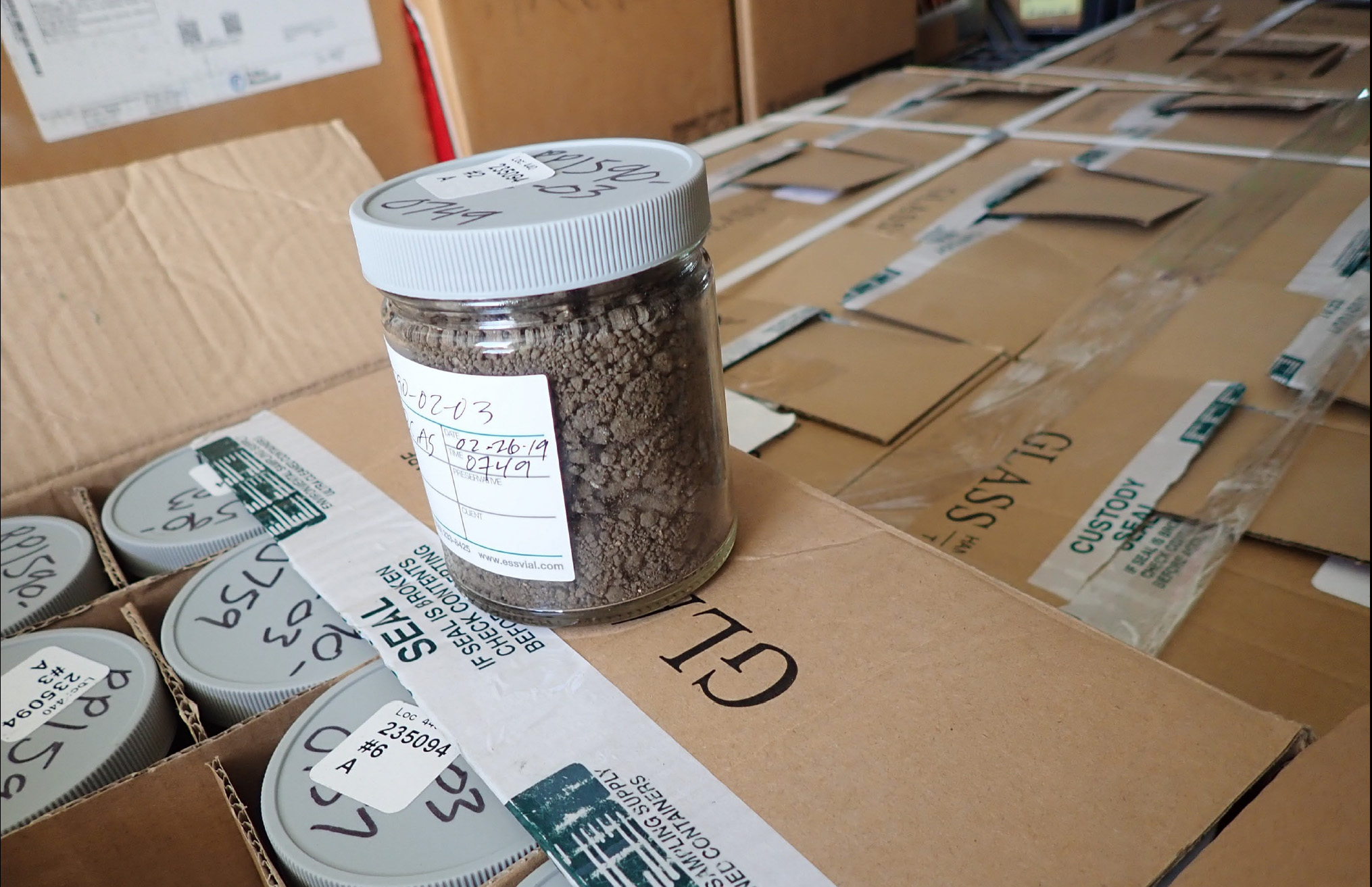 The U.S. Environmental Protection Agency inspected the storage of soil samples in Jurupa Valley after receiving a complaint from residents. Photo: EPA.

For four years, thousands of soil samples and paint chips taken from homes, schools, parks and parkways near the former Exide battery facility have been stored inside shipping containers at a Superfund site. Without consulting local officials or residents, California’s Department of Toxic Substances Control transported the samples to the Stringfellow facility, an Inland Empire quarry that once served as an industrial dumping ground — one that leaked toxic chemicals into groundwater and soil over several decades.

Stringfellow appealed to DTSC because it has 24-hour security, fencing and enough room for the six shipping containers housing the samples that were removed from communities near the Exide facility. DTSC manages both Stringfellow and Exide as the agency charged with cleaning up toxic industrial pollution at both sites.

“The department also determined that the Stringfellow site was the most cost-effective” of the five sites that were considered for storing the Exide samples, DTSC spokeswoman Elizabeth Scott wrote in an email reply to questions from Capital & Main.

No one can blame the state agency for trying to rein in costs for a massively expensive cleanup of lead and arsenic contamination caused by the former Exide battery recycling facility in Vernon, a small city five miles south of downtown Los Angeles. But when it comes to environmental justice, cutting costs often means frugality at the expense of communities suffering from industrial pollution.

“It doesn’t matter what income level we’re at. They shouldn’t have brought those samples here. What were they thinking?”

Moore says she feels a sense of betrayal that DTSC didn’t inform residents. She said she’s among the 4,000 Glen Avon residents who sued the state, county, companies and others in what was then called the largest civil lawsuit in the nation’s history. The lawsuit was part of a decades-long battle over pollution caused by state-sanctioned waste dumped by companies such as Rockwell International, General Electric, McDonnell Douglas and Northrop at the Stringfellow quarry between 1956 and 1972. She’s long worried about the dust from the acid pits swirling toward her home on windy days, wondering whether particles might harm her three kids, the youngest 3 years old. Now, she fears further contamination with the news that Stringfellow, in addition to its hundreds of chemical contaminants, is now housing Exide samples.

“It doesn’t matter what income level we’re at,” Moore says. “They shouldn’t have brought those samples here. What were they thinking? That we don’t matter?”

DTSC officials say the Exide samples don’t pose a health or safety risk to residents or the environment.

“While we are confident that the storage of these samples at the Stringfellow site is legal and safe, we acknowledge and respect local concerns,” the DTSC’s Scott wrote.

Such statements don’t appease residents like Josefina Rubalcava, who was dismayed to hear about the pollution after she moved to Glen Avon eight years ago. “Why should we trust that they’re telling us the truth? It’s like the wolf guarding the sheep.”

The Exide scandal has become a symbol of environmental wrongdoing inflicted upon working-class communities of color. Residents in Boyle Heights, the City of Commerce and other southeast L.A. County communities are suffering from potentially life-threatening harms caused by pollutants that the battery recycling facility released into the air, soil and water for decades. Exide Technologies avoided criminal prosecution in a sweet deal in which they agreed to pay a small percentage of the hundreds of millions of dollars required for cleanup and remediation. DTSC, which failed to stop the pollution as it was happening, was left to deal with the mess. Now, DTSC is transporting materials from one polluted site to another. Such a move opens a new chapter when both communities deserve to see the saga end.

In June, Jurupa Valley Mayor Chris Barajas sent a letter to DTSC demanding that the 500,000 pounds of samples be moved elsewhere, the Riverside Press Enterprise reported. DTSC Director Meredith Williams responded in mid-July that the containers will be moved to a recycling facility in San Jacinto. Prompted by community furor, DTSC decided to move the samples to another location in the Inland Empire but says it will take four to five months to complete the transfer as it negotiates a new lease, prepares the new site and secures all necessary permits.

But the damage has been done. A tenuous trust that’s taken decades to build has been broken.

“This isn’t an agency with a good history,” says Penny Newman, a well-known activist who first took up the fight against Stringfellow pollution in the early 1970s as a young mother of two boys. She was labeled a “hysterical housewife” when she first expressed concern about the waste facility causing cancer, deaths and neurological issues such as skin rashes and bloody noses. Protracted legal battles eventually garnered $114 million to help clean up pollution caused by hundreds of spent acids and caustics, solvents, pesticide byproducts and metals. Now 75 years old, Newman is still fighting for justice in the community she has called home for much of her life.

It was Newman who informed others about the Exide samples at Stringfellow after she found out in April from a whistleblower.

“EPA was even shocked. They said so when I brought it up at one of the Stringfellow meetings and asked them about it,” Newman says. “There was absolute silence.”

An inspection by the EPA found that DTSC enacted strict protocols mandating limited access to and handling of the Exide samples, as well as safety guidelines.

U.S. Environmental Protection Agency spokesman Michael Brogan confirmed via email that his agency didn’t find out about the Exide samples at Stringfellow until May, when the agency was notified by the Center for Community Action and Environmental Justice, the organization founded by Newman in 1978.  (This organization was a key player when Jurupa Valley became one of the first communities in the state to adopt an environmental justice element in its general plan and now serves as a model for other cities seeking to do the same.) DTSC is not required to disclose to the EPA where it stores its Exide samples, Brogan said in an email.

An inspection in June of Exide samples at Stringfellow by the EPA, which provides federal oversight of the Superfund site, found that the storage of the samples did not violate federal or state environmental and health safety laws, according to the inspection report. The 43-page document included more than two dozen photos showing the six metal shipping containers, lined up on a concrete slab. The nearly 190,000 samples are contained in small glass jars that are packed into cardboard boxes shelved inside the containers. Each shipping container has a window with thick metal grates. The EPA report shows that DTSC enacted strict protocols mandating limited access to and handling of the Exide samples, as well as safety guidelines.

“These samples were collected and analyzed as part of DTSC’s investigation into the potential scope of the area of contamination from the Exide facility,” Scott wrote. “These samples must be placed on hold, stored, and cannot be disposed of while litigation is pending, which could take several years.”

Google Maps shows that the San Jacinto storage facility, classified as a green material composting operation, is located on the edge of Mystic Lake, close to the Perris Lake Recreational Area, where families enjoy camping, fishing and other outdoor activities. Mystic Lake is currently dry. Old wooden cow stables, rusting tractors, shipping containers and petroleum tanker trailers are among the many items dumped at the location. Still, a few residences are located a few hundred feet away. DTSC promises to “select a parcel that is far away from any residence.”

Questions remain. DTSC cannot provide details as to why Jurupa Valley leaders and residents were not notified about the Exide samples.

“Due to recent staff turnover, we are reviewing our files to understand how notifications were managed,” Scott wrote in response to questions.

Strikingly, this statement sounds much like one offered in 2015 by former DTSC Director Barbara Lee at a community forum in southeast L.A. County with angry residents concerned about Exide contamination.

“I don’t have an answer for you about who’s responsible for everything that’s happened,” Lee told a resident, according to a documentary produced by the Los Angeles Times. “Looking at the record, there are things I can’t explain and the people who could explain are no longer with the department. I think there were people who didn’t act fast enough. They didn’t do their job to the standard they should’ve done their job. I don’t think it’s criminal.”

DTSC’s actions may not be criminal, but it’s clear that stronger laws are needed for more accountability. Until then, predominantly lower income communities of Black and Latino residents will continue bearing the burden for rampant industrial pollution with little recourse from the agency charged with helping protect their health.

Why Did the Government Wait So Long to Act Against Monkeypox?