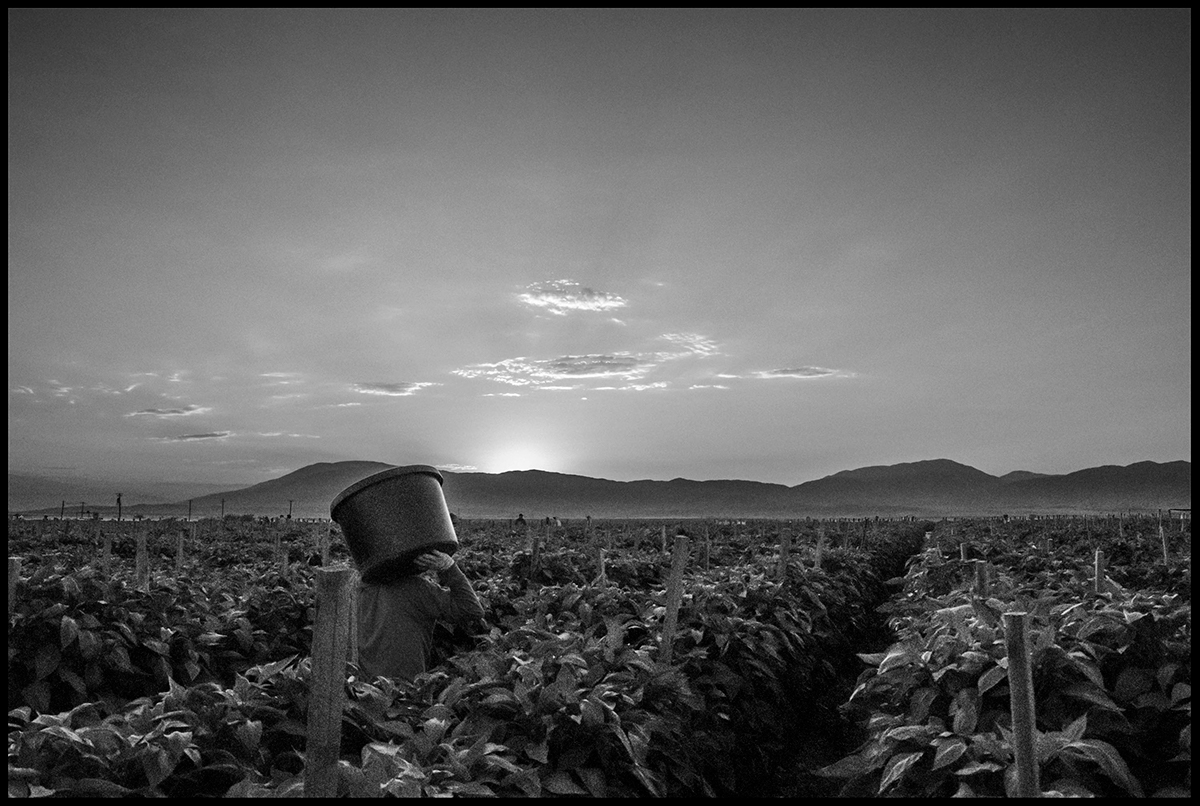 As the sun rises over the Tehachapi Mountains to the east, a farmworker carries his bucket down the row to the place where he’ll start picking peppers. All photos by David Bacon.

In a field near Arvin, at the southern end of California’s San Joaquin Valley, dozens of workers arrive at 5:30 in the morning. It’s already over 80 degrees, and by midafternoon the temperature will top 114 degrees, according to my iPhone.

Is this heat normal? The southern San Joaquin is a desertlike pan between the high Sierras and the Pacific Coast ranges, whose rivers have been diverted into giant irrigation projects. High temperatures are the norm. In 1933 the thermometer reached 116 degrees on July 27. The high this past July was 112.

In the summer, cars line the valley’s rural roads and highways, next to field after field. Even before daybreak, people stream from their vehicles into the rows and vines. By starting early, farmworkers can get seven or eight hours in before the heat reaches its peak. Most head home then, but some continue on, despite the temperature.

Farmworkers in the San Joaquin Valley have no choice but to treat the heat in a matter-of-fact way — laboring through the summer means survival in the rest of the year. Summer is the season with the most demand for field labor, so people get in whatever hours they can, hopefully saving enough money to weather the months when work is scarce.

It’s easy to pick up a bag of delicate small bell peppers in the supermarket, or lift a heavy watermelon out of the bin, without thinking about what it must have been like to get them from field to city in this summer’s heat. But in California, workers used to die from it.

In 2005, after four workers died from heat exposure, California began requiring growers to provide adequate water, shade and rest breaks. But in 2008, 17-year-old Maria Isabel Vasquez Jimenez died from working in the grape harvest in 95-degree heat. That led to stricter standards and more enforcement. Nevertheless, at least 14 California farmworkers died of heat-related illness between 2005 and 2015.

A recent report by Vermont Law School’s Center for Agriculture and Food Systems, “Essentially Unprotected,” points out that only California, Minnesota, Washington and, most recently, Oregon have any requirements mandating heat protection for farmworkers. There is no federal heat standard, although unions have fought for one.

An article this year in the Journal of Occupational and Environmental Medicine warned, “Immigrant farmworkers will often suffer through [heat-related illness] rather than report it as they do not want to be fired for being perceived as a bad worker, lose income, or let down coworkers, especially if they are being paid by piece rate rather than by time.”

Yet, despite the heat, the immigrant workers in these photographs were out in the fields, laboring to provide the food for Los Angeles, San Francisco and the rest of this country’s cities, with their sweat earning the money their own families need to live. Agustin Padilla arrives at 5:30 a.m. with a group of friends, and carrying his knee pads he walks from the car to the rows where early arrivals are already at work. This is only his third day, and he hasn’t yet learned one of the most basic lessons for people doing this job in the summer heat. He wears a T-shirt instead of the layers of clothing others use to insulate themselves from the brutal temperatures. 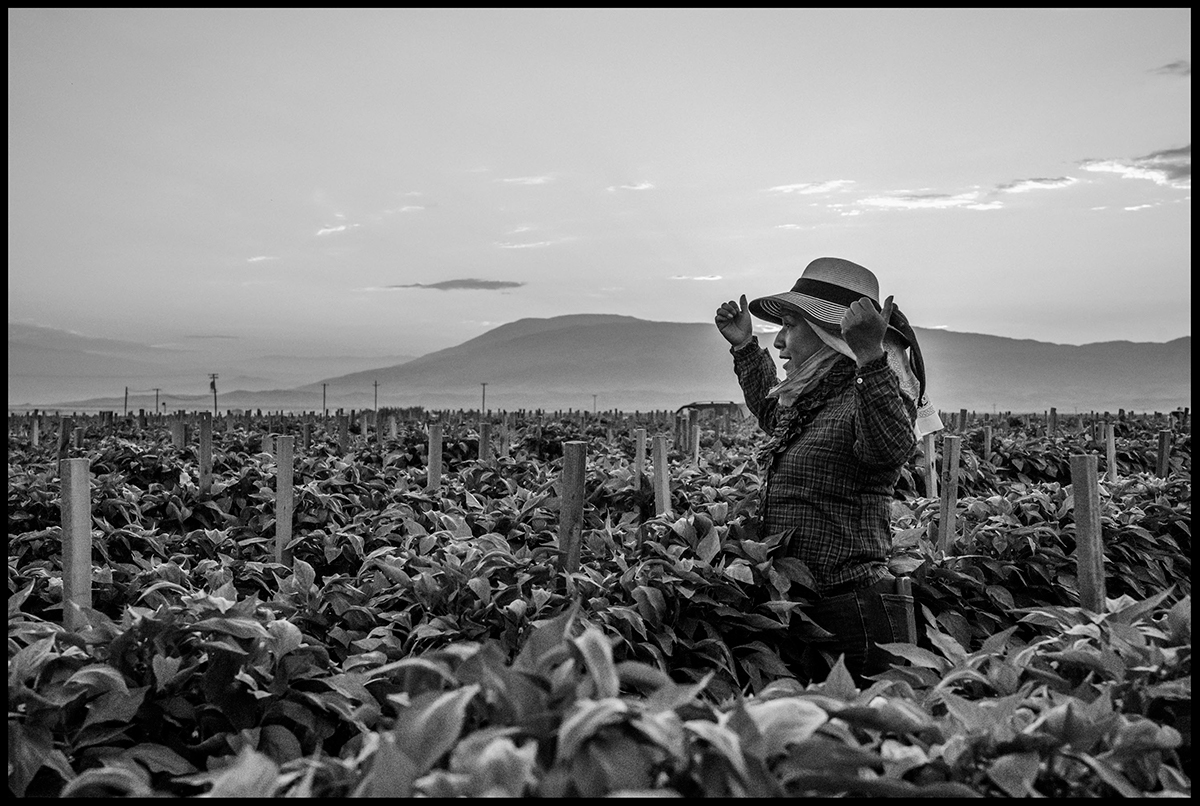 Veronica Reyes is the forewoman of the crew. She calls out to the arrivals, directing each person to her or his assigned row. 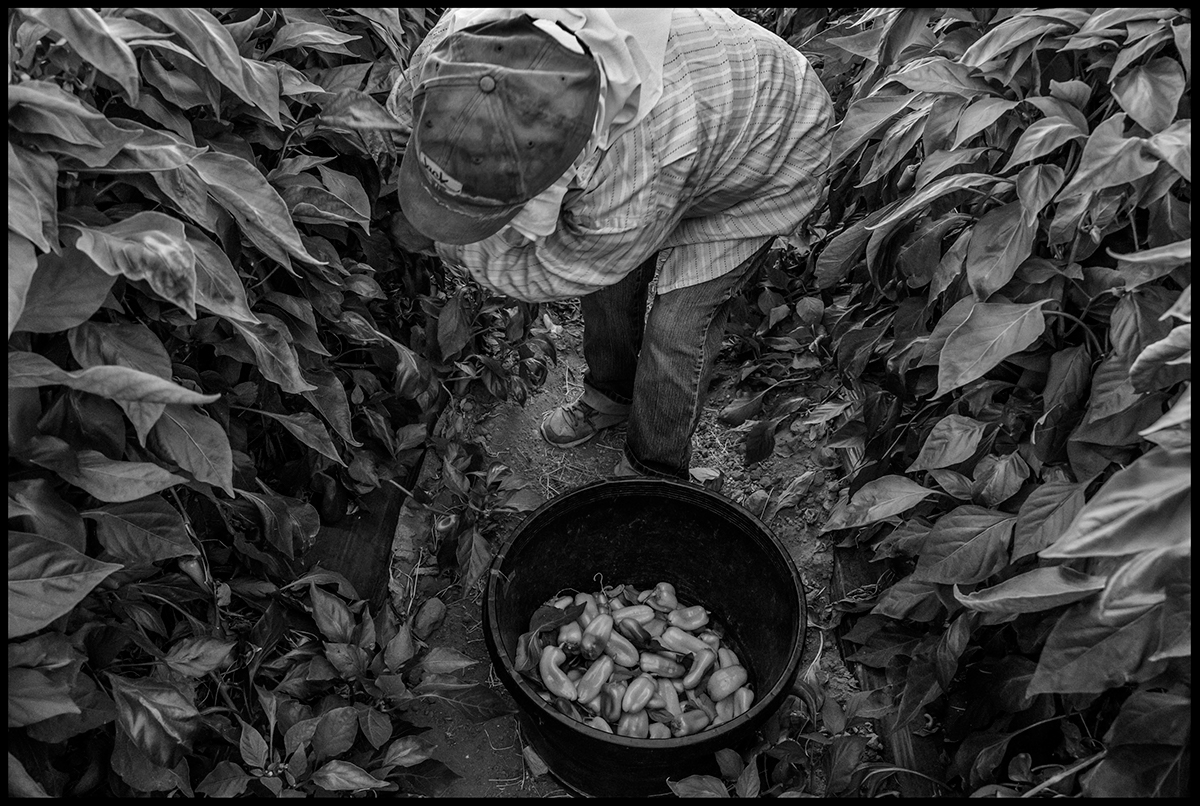 Alicia Canseco fills up her bucket with the sweet ornamental bell peppers found in multicolored variety bags in the supermarket. She gets an hourly wage of $14. The company pays a bonus of 50 cents for every bucket, and she estimates that she’ll be able to pick 50 buckets that day before it gets so hot she’ll have to go home. 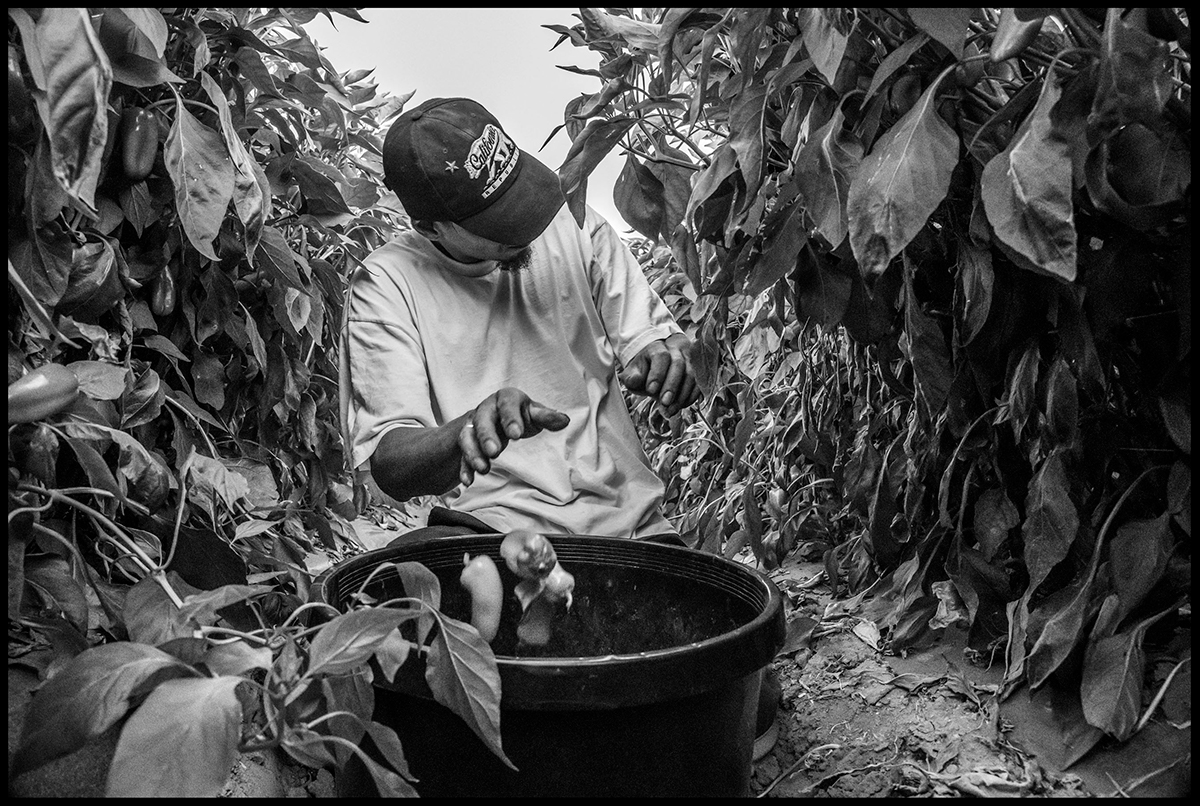 Agustin Padilla picks as fast as he can, but he’s slower than most people in the crew, who’ve been doing this work much longer. He was able to pick 20 boxes a day and hopes he’ll get faster. Francisco Hernandez empties his bucket into the bin. Hernandez is a Oaxacan migrant from Putla, as are many of the workers in this crew. He arrived with his sister Minerva and other family members, who all live together and share a ride to the field. 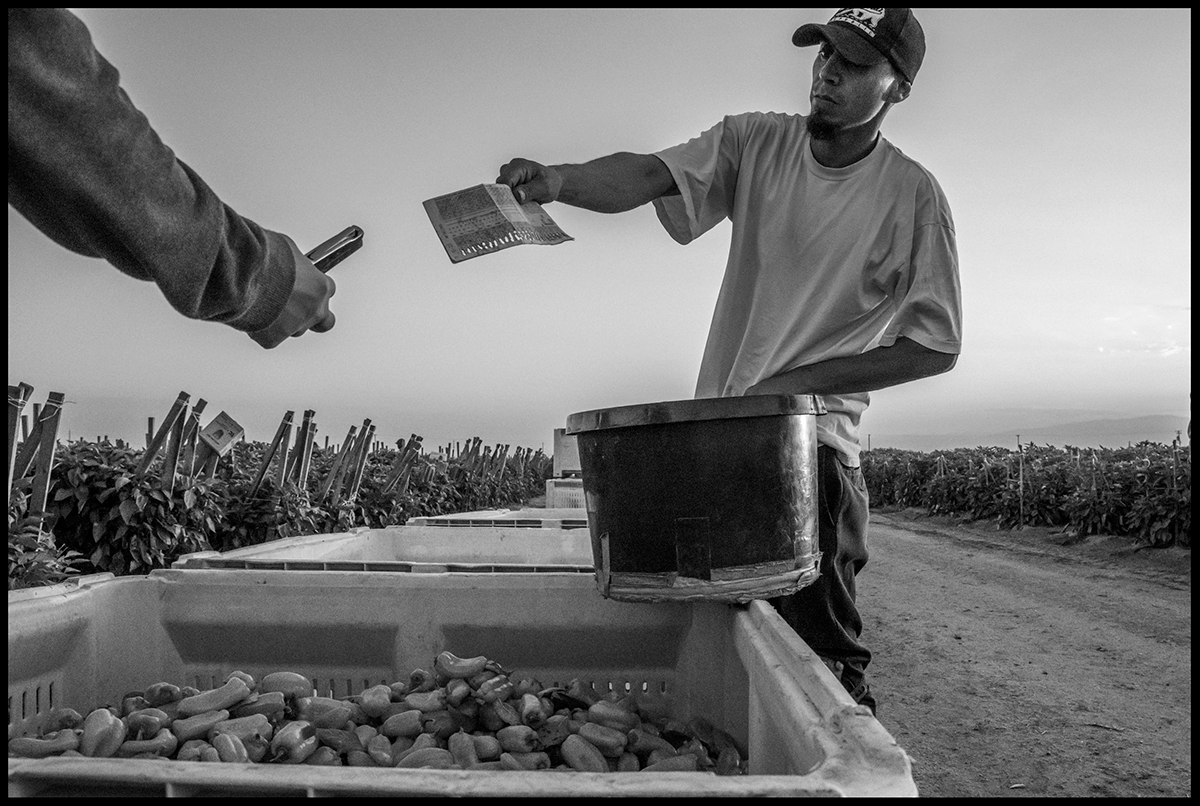 When Agustin Padilla fills his bucket, he takes it to the bin. After emptying it, he hands his ticket to the checker, who punches it to give him credit for the bonus. 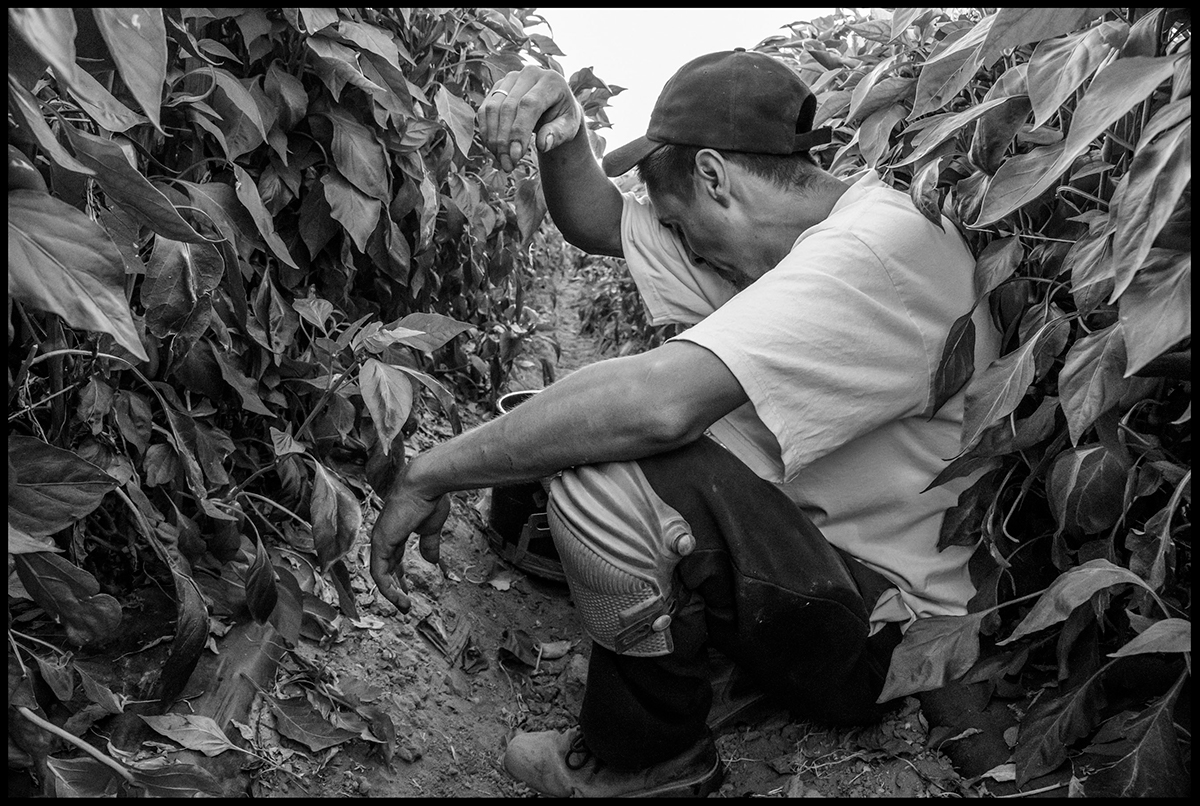 By 7 a.m. the heat has already gotten to be too much for Padilla. He rests in the shade in the row, wiping the sweat from his forehead. 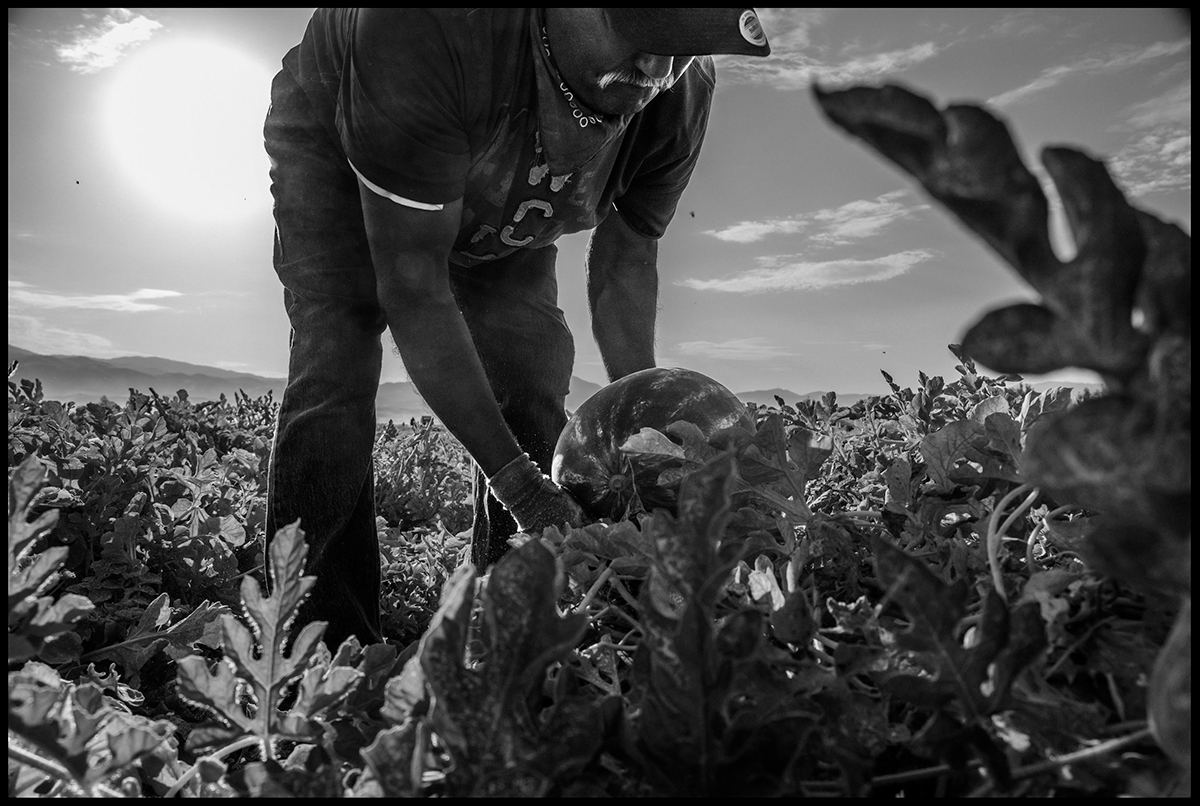 In a nearby field, another group of farmworkers began harvesting watermelons as soon as there was enough light to see. The first people at work in this field are the cutters, who go down the rows looking for ripe melons. When they find one, they cut the vine and lift it above the leaves. Arturo Cardona says he’s been doing this job for 22 years. 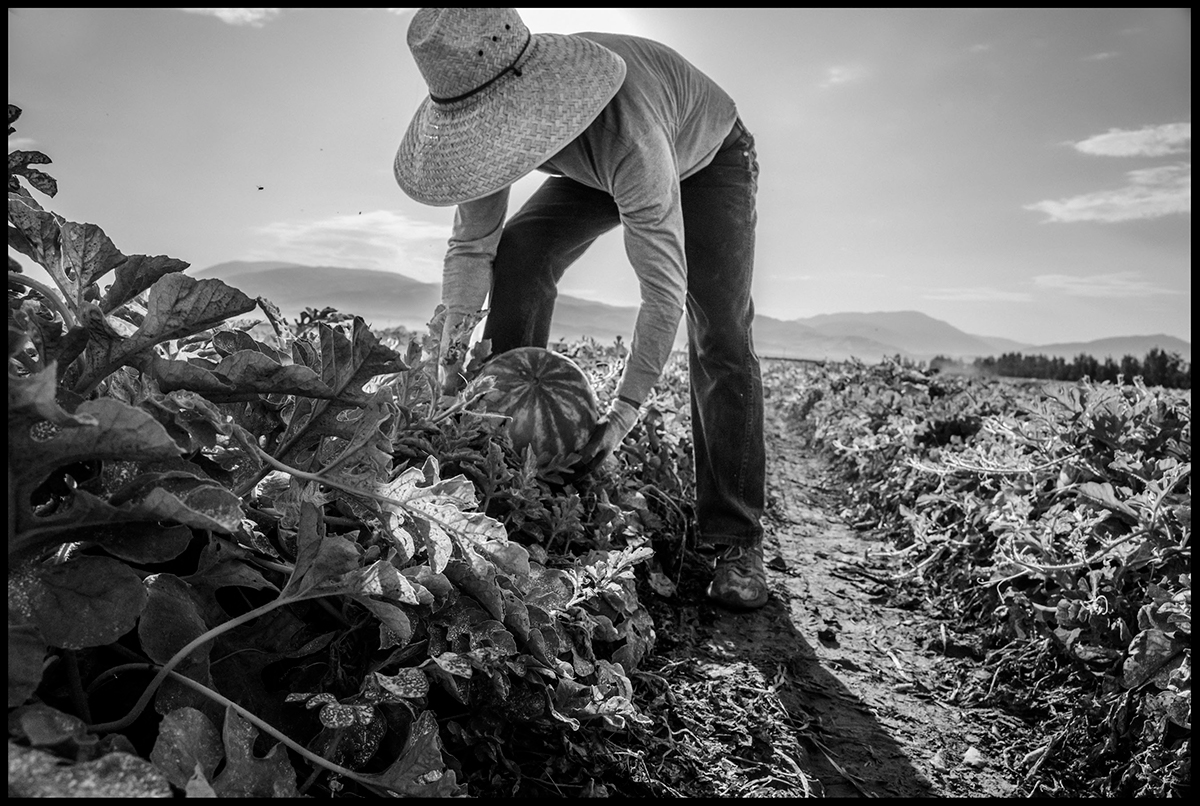 Another cutter, Antonio Torrez, works as part of a three-person team. At 8 in the morning the temperature is now over 95 degrees. 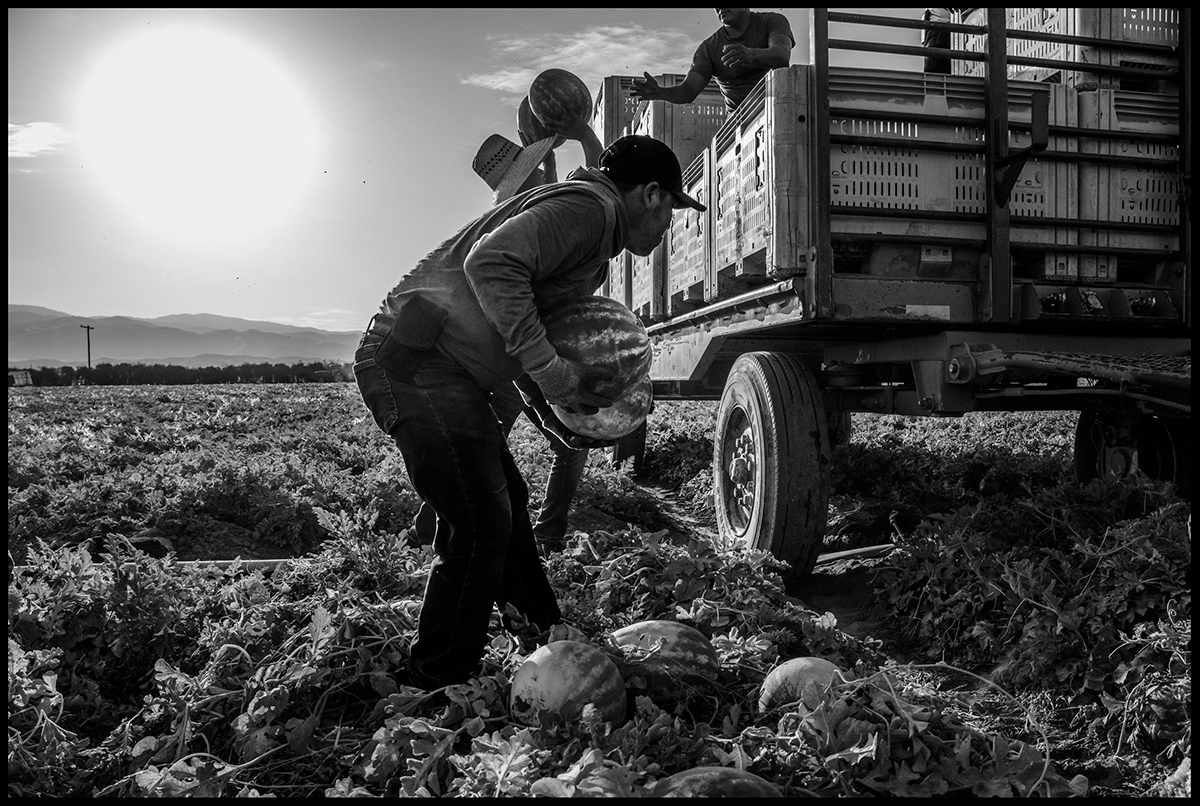 Behind the cutters, Jesus Arnoldo and Enrique Morales are part of a crew of loaders. They pick up the melons, often two at a time, and hand or toss them to men on the trailer, who put them into bins. Juan Hernandez picks up a watermelon as Jose Chavez gets ready to catch it. Meanwhile Martin Mendoza tosses two melons to Jose Moreno on the trailer. Watermelon crews get paid as a group, $150 for each trailer. They divide the money evenly, which works out to about $20 per person for each trailer. They can load seven to eight trailers before it gets too hot to do this heavy work. 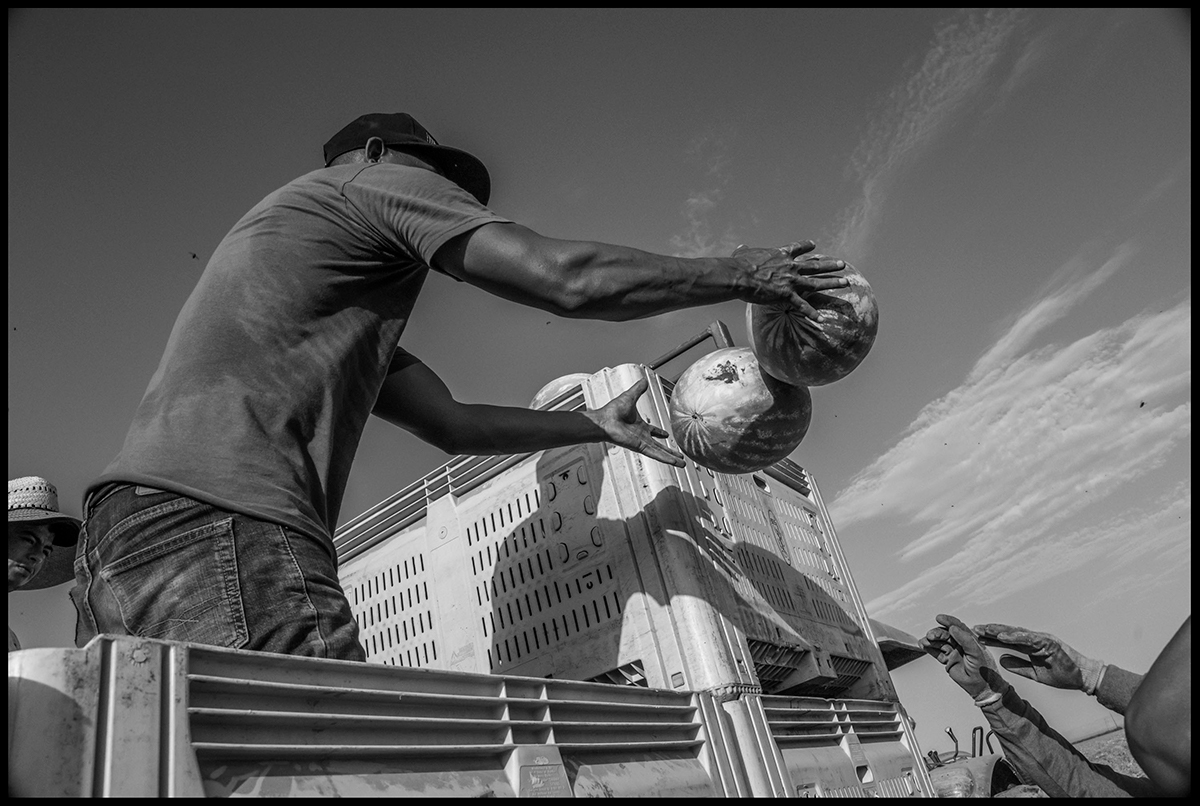 On the trailer, Marcos Mascareno catches two watermelons at a time, puts them (without bruising them) into the bins and gets ready for the next toss. The loading crew often works faster than the cutters can cut, and they stop for a break when they catch up to them. Juan Hernandez wipes the sweat from his eyes as he pauses for a minute or two. Each trailer carries an Igloo cooler with water. When the workers stop for a break, they get a drink. Armando Miranda drinks straight from the spigot. California regulations require employers to provide one quart of fresh water per worker per hour of labor. The tractor and crew head down the field. This crew migrates from field to field, following the melon harvest as it moves north through California. Although all the workers are immigrants from Mexico, they live now in California, in the Coachella Valley, an hour north of the border. During the harvest season they’re on the road and won’t see their families until the picking is over and they return home.