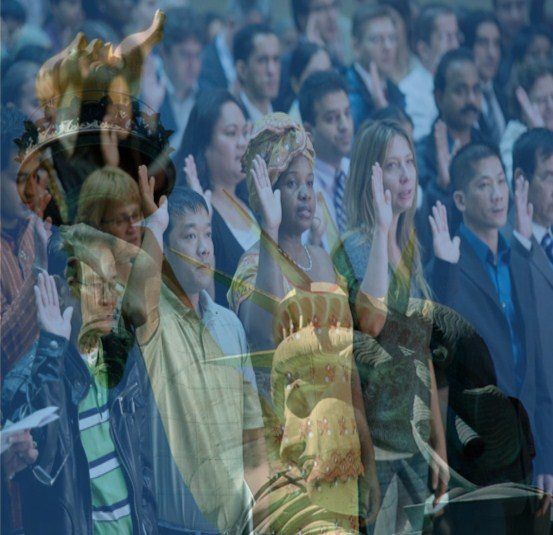 In October of 2011, Governor Jerry Brown signed into law the California Dream Act—which allows undocumented but high-achieving immigrant students to receive state funds to help pay for college. It was a monumental victory for tolerance and the culmination of a long fight—Arnold Schwarzenegger repeatedly vetoed similar measures during his tenure in the California governor’s office.

Come November 6, however, that fight could begin all over again if California’s Proposition 32 passes. The initiative will outlaw the use of automatic payroll deductions from union members and corporations for political purposes, crippling union political activity and empowering the measure’s billionaire backers to impose their political will on the state. While state unions passionately fought for the California Dream Act’s passage, they were opposed by politicians with ties to Prop. 32’s backers. Though they might not be rabid with anti-immigrant bile, Prop. 32’s moneymen have no problem funneling money to politicians who are.

Take, for instance, Allan Mansoor, currently running for the State Assembly. He is an avowed enemy of the Dream Act, calling it “A slap in the face to people who followed the rules.” Mansoor has received major donations and support from Prop. 32 backers like Larry T. Smith and his powerful political action committee Family Action and the Lincoln Club of Orange County, as well as Howard Ahmanson.

When he served as mayor of the Orange County city of Costa Mesa in the early aughts, Mansoor launched a very public crackdown on Mexican lunch trucks—or, in his words “roach-coaches” blaring “La Cucaracha”—that were supposedly despoiling the suburban tranquility of his once peaceful town.

The move was blasted by the local press. Wrote OC Weekly food critic Gustavo Arellano: “Trust me on this one: As someone who has followed [these trucks] for nearly a decade, they’re not going into Costa Mesa . . . Mansoor is a bigot.”

The lunch truck crackdown, however, paled besides Mansoor’s next foray into immigration politics. In 2005, well before Arizona ever passed its anti-immigrant law SB 1070, Mansoor authorized Costa Mesa police to run immigration checks on individuals suspected of crimes, as well as on unlicensed drivers. He even proposed authorizing local police to investigate federal immigration crimes—creating a national news story over fear the rule would result in the racial profiling of Latinos.

The situation was ultimately resolved by installing a permanent Immigration and Customs Enforcement official in the local jail. But not before the American Civil Liberties Union sued Mansoor and Costa Mesa, after an immigrant rights advocate was arrested for speaking up against the plan at a city council meeting.

Belinda Escobosa Helzer, director and senior attorney of the ACLU’s Orange County office, which filed the suit, says that during the discovery phase of the lawsuit her group uncovered close ties between Mansoor and the anti-immigrant vigilante group the Minutemen, as well as its founder, Jim Gilchrist. Mansoor was even made an honorary member of the organization at one event.

“We believe the Minutemen to be a very dangerous group,” says Helzer. “Given the history of [Mansoor’s] activities in Costa Mesa, we would be concerned with any public servant who has those kinds of connections.”

Mansoor isn’t the only anti-immigrant zealot receiving material support from Prop. 32’s backers. San Bernardino Republican State Assemblyman Tim Donnelly recently received a $3,900 contribution from Howard Ahmanson’s political asset manager, Fieldstead and Company, for his reelection bid. Donnelly is probably best known for bringing a loaded .45-caliber Colt Mark IV on board a flight to Sacramento in January of this year. His excuse? Illegal immigrants were after him!

Donnelly is one of California’s most publicly anti-immigrant politicians. He’s the founder of his town’s chapter of the Minuteman—the xenophobic group that has tasked itself with patrolling the borders for undocumented immigrants. He was also the leading opponent of the Dream Act. Not only did he vote against the bill’s passage, Donnelly began collecting signatures to have the law repealed by ballot measure shortly after it was signed into law.

Fieldstead, incidentally, donated to Donnelly’s campaign well after his airplane adventure and anti-immigrant paranoia made national news. Ahmanson, rather disingenuously, claims that he himself isn’t anti-immigrant: “Most immigrants,” he told the Sacramento Bee in 2011, “are conservative on the social issues.”
Perhaps more hypocritical than disingenuous, however, is major Prop. 32 donor Jerry Perenchio. Even though he made much of his fortune as a co-owner of the Spanish-language TV network Univision, Perenchio has channeled $2.5 million in this election cycle to Republican candidates across America who could easily be described as anti-immigrant. The money was largely routed through Karl Rove’s American Crossroads Super PAC.

In Nevada alone, American Crossroads has supported Republican Senator Dean Heller, who vowed to alter the 14th Amendment to prevent those born in this country from automatically becoming citizens—in order to eliminate immigrant “anchor babies.” Earlier, in a 2011 special election, American Crossroads helped finance the campaign of Republican Mark Amodei, who compares the effects of illegal immigration to the devastation Hurricane Katrina wreaked on New Orleans.

Even before this election cycle, Perenchio donated money to such anti-immigrant California politicians as Santa Barbara Republican Tony Strickland—who voted against both the Dream Act and the Trust Act, the latter of which would have limited California law enforcement’s cooperation with federal officials in rounding up undocumented immigrants for deportation.

Strickland is a popular choice among Prop. 32 donors, receiving a rare direct donation to a California politician from Koch Industries—to the tune of $5,000.

Admittedly, most of Prop. 32’s backers aren’t aggressively anti-immigrant. At least not openly. They’re too savvy for that—after all, 38 percent of California is Latino. On a statewide level, pushing for an Arizona-type law would ultimately mean political suicide for California Republicans.

However, while political considerations may be keeping Prop. 32’s known backers from frothing at the mouth over immigration, it’s the unknown that is cause for concern. Earlier this week, the Prop. 32 campaign netted a massive $11 million donation from a mysterious non-profit calling itself Americans for Responsible Leadership. The organization is based in Arizona.

Little is known about ARL, and even less about its financial supporters. Our efforts to contact the group by press-time were unsuccessful.

Despite the scant details over the Arizona money’s origins, however, its infusion into the political process ultimately points to the greatest cause for concern over Prop. 32—the complete unknown. Even if California Republicans are too timid to launch an Arizona-type crackdown, that doesn’t mean shadowy out-of-state money from wealthy xenophobes couldn’t push for such a measure. As Perenchio’s national donations, as well as pro-Prop. 32 donations to candidates like Mansoor and Donnelly, indicate, curbing anti-Latino rhetoric and stemming the tide of xenophobic legislation is nowhere on the Prop. 32 donors’ priority list.

A Vote of Confidence: Why We Must Safeguard the Ballot