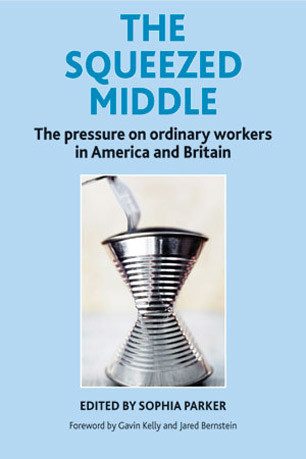 The Squeezed Middle: The Pressure on Ordinary Workers in America and Britain, a short book edited by Sophia Parker, brings together 16 scholars and activists to diagnose America’s malaise. (Policy Press, 2013.)

You probably don’t need a book to tell you that the United States has fallen into the economic abyss and the United Kingdom is teetering on the edge. Wages have been flat for 40 years; welfare as we knew it is gone and the political system has been corrupted by corporations and greed.

If you’re British, you might think that the United Kingdom isn’t teetering, but has already firmly landed at rock bottom. If that’s what you think, then think again. Things are much more savage on the Tea Party side of the Atlantic Ocean. Mother country, beware.

Inequality has risen dramatically in both the United States and the United Kingdom, but the United Kingdom maintains some vestiges of civilization, including universal health care, job protections for full-time workers, and decent (if declining) unemployment benefits.

In the United States, workers are, for the most part, on their own.

The Squeezed Middle, edited by Sophia Parker of the U.K. think tanks Demos and the Resolution Foundation, does a good job of laying out the depressing statistics behind the “we are the 99 percent” activism of the Occupy movement and other progressives. It is a collection of 11 essays by leading scholars and policy professionals from both sides of the Atlantic.

Each chapter focuses on a different aspect of how today’s social and economic policies put pressure on ordinary workers. The editor and publishers are British, but most of the authors and studies are American. American readers of The Squeezed Middle will recognize many of the high-profile American contributors to the book.

For example, Larry Mishel of the Economic Policy Institute writes with coauthor Heidi Shierholz of the lost decade of the 2000s. They burst the myth that the Great Recession began with the burst bubble of 2008. They show that the business cycle before 2008 was the first ever in which wages peaked lower than at the peak of the previous cycle.

For most Americans, the last time they got a raise in real inflation-adjusted wages was the late 1990s.

Kenworthy advocates a high-employment route out of permanent recession centered on greater public employment and resurgent unionization. He also calls for the creation of an independent commission to set and manage the minimum wage for the United States, as the U.K.’s Low Pay Commission does for the United Kingdom.

Another American contributor is Tamara Draut from the U.S. incarnation of Demos. She exposes the lunacy of austerity as a path to prosperity and lays out a more rational approach based on appropriate levels of taxation and spending, in particular spending on childcare and infrastructure.

Political scientist Jacob Hacker, co-author of Winner-Take-All Politics, points in his essay to three lessons to be learned. First, pay attention to market incomes. Second, don’t let policies drift for years without renewal. Third and most important, invest in organizations that can advocate for ordinary people.

Other contributors to The Squeezed Middle write about the lived realities of low-wage employment, ways to improve worker opportunities through training, and the role of savings in raising families out of poverty. The role of money in politics also comes in for a drubbing in many of the essays.

For anyone who wants an all-in-one primer on the economic problems facing the middle class in America today, this is your book. The Squeezed Middle is full of data, but it is no academic tome. It is accessible to anyone who cares enough about deteriorating living standards to want to know how we got into this hole and what we can do to get out of it.

Books like The Squeezed Middle won’t solve our economic problems, but they do help give people like you and me the information we need.

(Salvatore Babones is a senior lecturer in sociology and social policy at Australia’s University of Sydney and an associate fellow at the Institute for Policy Studies in Washington, DC. His post first appeared in Truth Out and is republished with permission.)