“I found out that nice, funny people I knew were harboring ugly, racist thoughts. I unfriended people I’d known for 40 years.”

Bethany Webb has lived in coastal Orange County for 40 of her 56 years. She rides a Harley and knows the surfers and served on PTA when her children were in school in Huntington Beach (“HB” to the locals). And yet she did not know the world views of some of her friends until the summer of 2016, when the heated presidential race forced people into their ideological corners.

In the swank seaside hamlets of California Congressional District 48, which includes four consecutive cities whose names all end in “beach,” people by custom and habit do not discuss politics. In bars, coffee shops and HB’s enormous dog beach, I met people who couldn’t name their congressional representative, Dana Rohrabacher, despite his national notoriety. I met supporters of the congressman who refused to talk (and threatened to sue me if I quoted them), and others who thought that he was a she.

“I mention Dana Rohrabacher, and they say, ‘Oh, she’s that pot-smoking surfer, right? Yeah, yeah, I think voted for her.’”

“I’ve heard it about a dozen times in the last year alone,” Webb says. “I mention Dana Rohrabacher, and they say, ‘Oh, she’s that pot-smoking surfer, right? Yeah, yeah, I think voted for her.’” 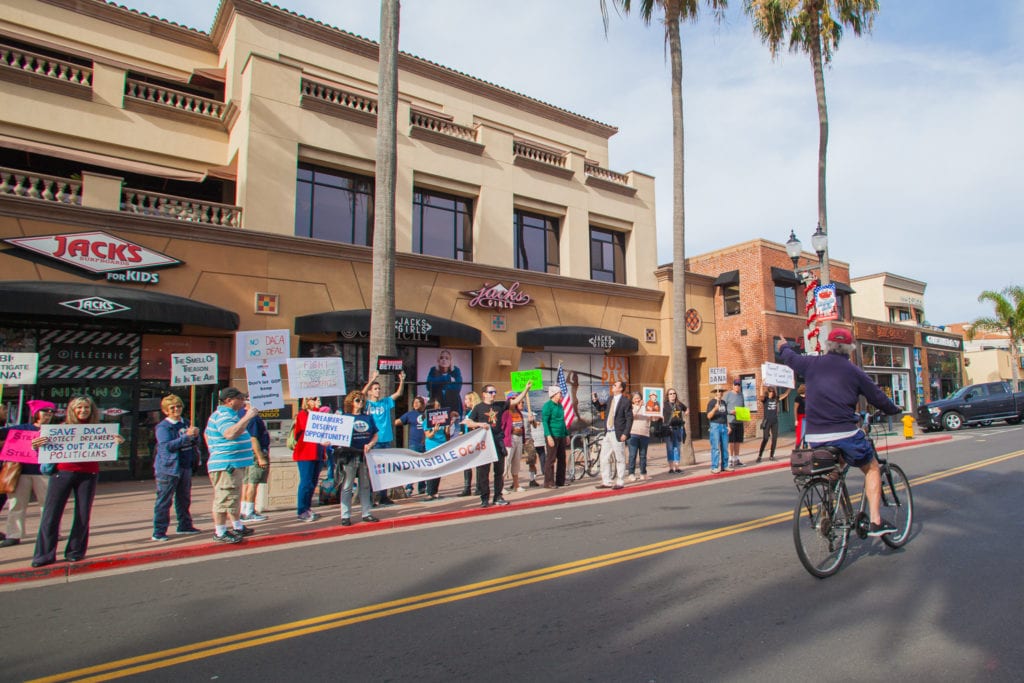 Every Tuesday afternoon, Webb gathers with 20 or 30 other activists and agitators on the corner outside Rohrabacher’s office, to protest everything from their congressman’s inaccessibility to his immigration policy. People with little prior interest in politics have become community organizers; people who were already community organizers are suddenly packing their meetings full. Small new groups have sprung up — including Webb’s own HB Huddle — to organize and educate voters; an Indivisible chapter has taken root.

Webb says that in all her time in the district she’s never seen so much political activity. It’s not partisan, she says, partly because she understands her community’s reflexive anti-liberal bias. “People have been brought out,” she says, “by their sense of decency.”

CA-48, which begins near the Los Angeles County-Orange County line and extends south to the city of Laguna Niguel, boasts a median income of $88,000 and a poverty rate of just under six percent — tied for the ninth lowest of the state’s 53 congressional districts. According to the most recent U.S. Census estimate, in 2016, the district is less than two percent African-American, and only about one-fifth Latino, a low figure for any Southern California community. The district has a laissez-faire, ambivalently libertarian sensibility to it; people in coastal Orange County mostly want to be left alone, to not have government taking away their money or policing their behavior.

People in coastal Orange County mostly want to be left alone, to not have government taking away their money or policing their behavior.

“We want a clean environment,” says Michele Williams Harrington, 45, a real estate broker and CEO of Star Estates. “But you also have to give people freedom.” She cites California’s pending legislation to ban restaurant servers from offering plastic straws as an example of governmental overreach.

Harrington lives at the southern end of CA-48 in Aliso Viejo and describes herself as a “typical Fox News viewer, typical Orange County Republican.” She was disappointed by the Republican Congress and the president’s inability to repeal the Affordable Care Act, which made providing health insurance to her 138 employees prohibitively expensive. She worries about Islamic terrorism more than North Korean belligerence, and has long wanted Congress to reform the country’s tax laws.

“I wrote on my Facebook page that the number one gift I wanted for Christmas was tax reform,” she says.

But she isn’t in lockstep with establishment Republicans in Washington. The bill that came out of the House, which capped mortgage interest deductions on new loans at $500,000, was not the gift she wanted. “It would have hurt a lot of people in Orange County,” she says, where most new mortgages are in the $700,000 to $800,000 range. It would have hit the real estate industry, which contributes significantly to Rohrabacher’s campaign, especially hard.

Rohrabacher also defends legal cannabis — clouds of it hang in the air along the district’s beachfront walks — and even admits using it himself, for a shoulder he injured while surfing. He opposed the re-authorization of Section 702 of the Foreign Intelligence Surveillance Act, explaining, in a Facebook video, that it “would open up the door to government surveillance of ordinary Americans.”

“Sea-level rise affects our tourist economy, our way of life,” says a 27-year-old from Costa Mesa. “We just want to protect all of that. I don’t see how that’s a super-partisan issue.”

But this year, due to the national political conversation, many coastal Orange County residents have heightened concerns about other issues, too — broader issues, such as immigration, racial politics and the environment. In past years, Rohrabacher had at most three or four opponents in the “jungle” primary, where the top two vote-getters face off in the general election, regardless of party. This year he has 13, including three Republicans, a Libertarian and an Independent.

“This is the first time in 30 years that Dana has had a spotlight on him,” says Aaron McCall, a 27-year-old from Costa Mesa who disagrees with Rohrabacher’s position on climate change. (“No aspect of the weather or climate currently being blamed on people is outside our planet’s recent natural variability,” Rohrabacher wrote in an open letter to Obama in 2014.)

“We’ve just come through a drought, and we worry about clean water and climate change,” McCall says. “Sea-level rise affects our tourist economy, our way of life. We just want to protect all of that. I don’t see how that’s a super-partisan issue.”

On immigration, Rohrabacher hailed the administration’s plan to end protections for the undocumented adult children of undocumented immigrants, saying in a statement that “legalizing their status sent a message throughout the world that our doors were open to share all the benefits accorded American citizens.” More recently, he blamed the government shutdown on Democrats putting “800,000 illegals” ahead of law-abiding Americans.

Harrington, though she agrees with Rohrabacher on most issues, has a more forgiving take on immigration. “I don’t think it’s fair to send people who have made a life here back to another country,” she says. “But we do need to fix border security so we don’t have this situation again in another 10 years.” She also believes immigrants should be able to come to the U.S. with the support of a sponsoring family. Two of her three 16-year-old children were adopted from Ethiopia, and she’s been frustrated that she couldn’t bring over their family members, too. “I want it to be easier to get into this country legally, and harder illegally,” she says.

“There are definitely things that keep me up at night,” says one Republican. “But Russia isn’t one of them.”

Huntington Beach resident Mary Kyle, 61, says she voted for Rohrabacher in every election but the last one. “Like most people here, I didn’t pay attention to down-ballot races. I’d get to the voting booth and think, you know, things are okay here. It’s pretty nice. I’ll vote for the incumbent.” But Trump’s build-the-wall, Mexicans-are-rapists rhetoric turned her off. “Yes, we have to control the borders,” she says. “Yes, we have to have strong immigration laws. But the people are being targeted are people in our community. They’ve been here for decades. I just think there should be a way to work things out.”

Polls and surveys suggest that Kyle is not alone. Only 32 percent of adults in Orange and San Diego counties, as surveyed by the Public Policy Institute of California in 2017, approve of the job Trump is doing; 68 percent of Republicans statewide want to find a way for undocumented immigrants to stay in the country as long as certain issues are met.

“History,” Kyle says, “will damn us for not taking Syrians in more, like we did prior to World War II, when we turned Jewish people away. That was not our most shining moment.”

Rohrabacher has been prominently in the news over the past year in connection with Robert Mueller’s investigation of Russia’s influence on the 2016 election. The long list of allegations include one from fellow California Republican Rep. Kevin McCarthy, who in a meeting with House Speaker Paul Ryan and other congressmen, named Rohrabacher as one of the people who takes a check from Moscow. (McCarthy has said he was only joking.)

But it’s not clear how much it matters to Rohrabacher’s constituents. “There are definitely things that keep me up at night,” says Harrington. “But Russia isn’t one of them.” Her indifference, she says, is common to her fellow Orange County fiscal conservatives. “It’s been going on for so long now that as soon as someone says ‘Russia,’ people just tune out.”

Lulu Hammad, a Palestinian immigrant who also lives in Aliso Viejo, maintains that “it’s important to call out the connection” between Rohrabacher and Russia. “But I don’t want Russia to distract from the issues,” she says. “The dynamics of our representative’s interaction with his district, his process and his policies — all of those matter to me more.”

Hammad likely speaks for many people in the district of all political persuasions. This is the year when their neighbors have begun to pay attention. The recently announced retirements of two other Orange County Republican representatives, Ed Royce and Darrell Issa, alerted her fellow conservatives not to take any seat for granted. “That threw everyone for a loop,” she says.

Laguna Beach resident Joe Moreno, manning a literature table at the Democratic candidate forum, says he was never politically active before last April, but he can now recite statistics — about the Republicans’ 11-point voter registration advantage in the district, about the numbers of no-party-preference voters — like a professional analyst. He shows me a new button he’s handing out. It says “Woke AF.”

“Do you know what that stands for?” he asks me. I tell him I do; I spend a lot of time on Twitter. Woke As Fuck. “That’s how the kids say it.”

Mary Kyle, sitting on a bench overlooking Huntington Beach’s sun-washed pier, might not use those words. But they apply, all the same. “This has become my year of listening,” she says, as wave after perfectly formed wave rolls toward the sand. “I’ve been learning more and more, about communities of color, gay communities. I’ve attended seminars at the LGBT center in Santa Ana.” She has also learned that the Southern Poverty Law Center considers coastal Orange County a hotbed of hate groups. “I saw the dots on their map, right in my neighborhood,” in both HB and Newport Beach, she says. “That’s something I never really understood before last year.”