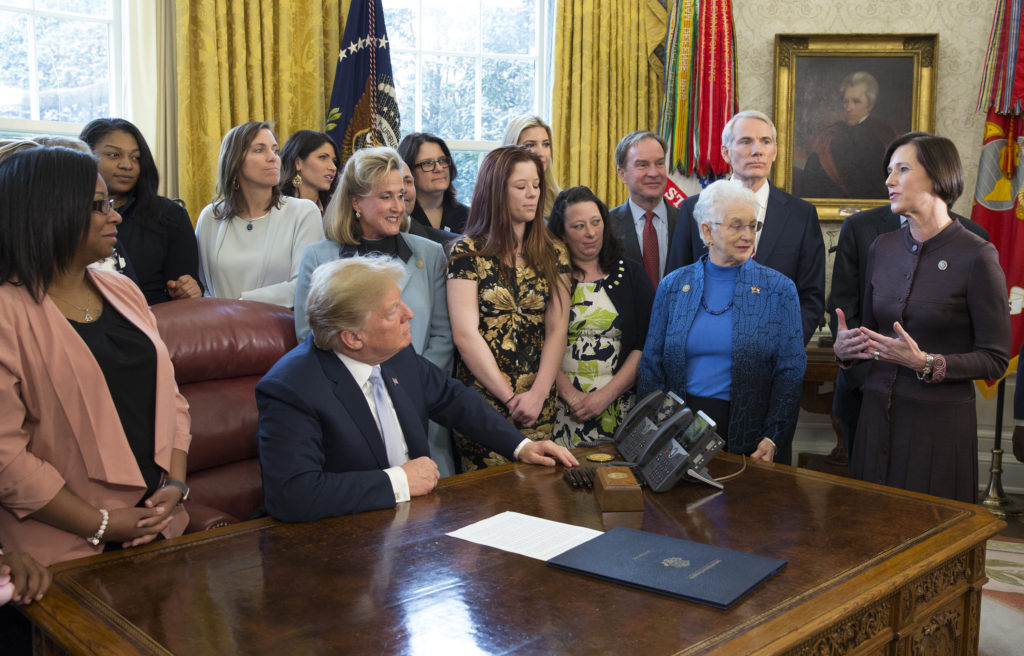 Hillary Clinton beat Donald Trump in CA-45, a sign that at least some of its conservative voters might be more loyal to ideals of diversity and tolerance than they are to their party.

Early in her political career Congresswoman Mimi Walters, a Republican from inland Orange County, California, minted her reputation as a gun-rights advocate. From 2004 to 2008, while representing the county’s southern coastal cities in the state Assembly, she twice voted against bills requiring the microstamping of bullets from automatic firearms, despite law enforcement’s support of the measure. Later, while serving in the state Senate, she said nay to background checks for ammunition buyers, to banning large-capacity conversion kits and to prohibiting people under domestic violence restraining orders from obtaining firearms.

Since she began representing California’s 45th Congressional District, Walters has had fewer opportunities to prove her Second Amendment bona fides; gun-related bills have rarely come up for a vote in House Speaker Paul Ryan’s Congress. But gun-rights groups continue to contribute to her campaigns. For her 2018 reelection campaign, gun groups have invested $5,150 in Walters, the third-largest contribution from gun groups to a single candidate in this cycle so far.

Before Parkland, the subject of gun rights almost never came up in Walters’ campaign statements, social media feeds or literature; it was just one part of the agreed-upon conservative platform, along with opposing abortion and beefing up the military. The issues Walters has chosen to focus on — lowering taxes, shrinking the size of federal government, reducing the deficit — have played well in historically conservative CA-45, where Republicans enjoy a nine-point registration advantage. On November 8, 2016, Walters won re-election with a 17-point margin.

But a lot has happened since then. For starters, despite Walters’ victory, Hillary Clinton beat Donald Trump in the district by five points, a sign that at least some of Walters’ conservative constituents might be more loyal to ideals of diversity and tolerance than they are to their party. (Irvine, the largest city in the district, is 40 percent Asian.) Nor has Trump’s reputation improved since he became president and promptly issued an executive order banning travel to the U.S. from seven Muslim-majority countries.

There are even some signs that Congressional Republicans more broadly have fallen from favor in Orange County. When Walters voted in May of 2017 in favor of the Republican replacement for the Affordable Care Act, a plan that would have left an estimated 23 million people uninsured, the Cook Political Report changed CA-45 from solid red to “lean Republican.”

Trump also pulled the U.S. out of the Paris Agreement. “That’s when a lot of people sprang into action, meeting with Walters and her staff,” says Kathleen Treseder, an ecology professor at the University of California, Irvine. Last October, Walters officially changed from a climate-change skeptic to a believer, Treseder says, and joined the Congressional Climate Solutions Caucus. Her voters, Walters’ staff explained, persuaded her.

Finally, a group of Parkland teenagers launched the #NeverAgain movement in response to the mass shooting at their high school, potentially altering the calculus of National Rifle Association monetary campaign support versus voter preference in the 2018 election. A survey conducted by the Public Policy Institute of California in late March found that California voters’ concerns about school shootings had risen dramatically, with 73 percent of respondents admitting they were worried about a mass shooting at their public school.

Orange County high school students, many in Walters’ district, and nearing voting age, rallied against guns in March and April, joining national events. And Rep. Walters’ social media feeds became overrun with gun-control advocates. From mid-February to late March, any conversation that Walters started — on tax reform, avocados or her own successful amendment to reduce sex-trafficking — was directed back to firearms in replies and comments.

“I am so inspired by all of the #Olympic athletes who continue to give it their all in #PyeongChang despite injuries and days of back to back competition,” Walters tweeted in mid-February.

Thirty years ago, many CA-45 cities were in the throes of master-planned sprawl. Manicured suburbs mingled with strawberry fields and orange groves, remnants of the vast agricultural fields the suburbs displaced. Their curvy streets, lined with houses that are, literally, all the same, bespoke a politics of its own. Irvine, as Los Angeles architect William Pereira designed it in the late 1960s, reflected a dreamy utopianism, where children could safely play within traffic-calmed enclaves, high walls sheltering them from thoroughfares where cars moved at near-freeway speeds. As it was later constructed by the Irvine Company’s Raymond Watson, Irvine became an assemblage of little villages, buffered by tidy parks and shopping centers from the ragged, needy world beyond.

Irvine is no longer the bastion of white Midwestern transplants that it was in the 1980s.

Irvine no longer smells like an orange grove. Most of the strawberry fields have been replaced with more carefully plotted communities and some random sprawl. Nor is the city still the bastion of white Midwestern transplants that it was in the 1980s. Twenty percent of eligible voting-age adults in Irvine hail from South Asian or Asian countries or have parents that do. Among U.S. cities, only Honolulu has a larger Asian plurality.

That concentration of immigrants and first-generation Americans is not everywhere present in the district. Mission Viejo, for example, is less than 10 percent Asian. But overall, one-fourth of registered voters in the district are naturalized citizens, according to a survey conducted by California 45th, a grassroots, nonpartisan research group, in May of 2017. While 46 percent of voters in the district who were citizens at birth have registered as Republicans, 72 percent of naturalized citizens are either Democrats or no-party-preference voters.

Two of Mimi Walters’ Democratic challengers in the June primary say they were motivated to run because of Trump’s travel ban.

If previous polls and studies have shown that immigrants don’t participate in elections with the same enthusiasm as other voters, Trump’s travel ban may have politicized them — along with Iranian-Americans and Arab-Americans in the district. Two of Walters’ five Democratic challengers in the June primary — Dave Min, whose parents immigrated from South Korea in the 1970s, and Kia Hamadanchy, a first-generation Iranian-American and Irvine native — say they were motivated to run because of the travel ban. Hamadanchy says his grandmother has not been allowed to visit him in America since the ban went into effect.

“When people tell me to go back where I came from,” says the 32-year-old Hamadanchy, who graduated from Irvine’s Northwood High School, “I tell them that’s exactly what I’m doing.”

In past elections, the gun control issue — along with the environment, immigration policy and health care — might have taken a back seat to the economy, which residents of Orange County’s fiscally conservative cities consistently rank as their number one issue. They have voted, by and large, in the interest of keeping their federal and state taxes low, even as many of them invest relatively high local taxes in well-staffed public schools. (Eighty-six communities and school districts in Orange County are subject to a special tax, referred to as the “Mello-Roos tax,” that helps pay for schools, roads, parks and other public amenities.)

As of the 2018 tax year, however, homeowners who itemize — more than 40 percent of the district — will have a $10,000 limit placed on the state and local taxes they can deduct from their federal taxable income. That will make a difference to the district’s wealthier residents. “If you can afford to live in a Mello-Roos development, that 10-grand limit is going to cost you,” says Alexandra Cole, a Mission Viejo resident who teaches political science at California State University, Northridge and leads the California 45th team. Two other Orange County legislators, Dana Rohrabacher and Darrell Issa, voted against the tax bill under pressure from their constituents. Walters supported it wholeheartedly.

“She keeps posting about how it will benefit the district,” Cole says. “But the problem I have as a constituent is at no time does she ever say how it will benefit the district, because so many of us take those state-and-local tax deductions.” For instance, she says, “I have 14-year-old twins. Once they turn 17, they reach the age where the child tax credit expires, and I’m paying higher taxes.”

When Cole conducted a survey of CA-45 voters’ opinions on the tax bill, she found only 45 percent of them supported the bill, while 47 percent opposed it — including, significantly, 63 percent of no-party-preference voters.

“That’s harsh,” she says. “People are really concerned that their taxes are going to go up.”

Cole is cautious, however, about suggesting any of it means a Democratic win in November. CA-45 is still a red district and even the no-party-preference voters, who now make up more than a quarter of the district’s voters, skew conservative on the economy, if not on the environment or immigration.

“There’s this real tunnel vision,” Cole says, “thinking that everyone’s angry and they’re going to rise up in this big blue wave in November. But you can’t rely on fantasies. You have to rely on what are issues that are of concern to people.”

Related Topics:Climate ChangegunsOrange County
Up Next

Timothy Snyder on Putin, Junk News and the Trump Trap