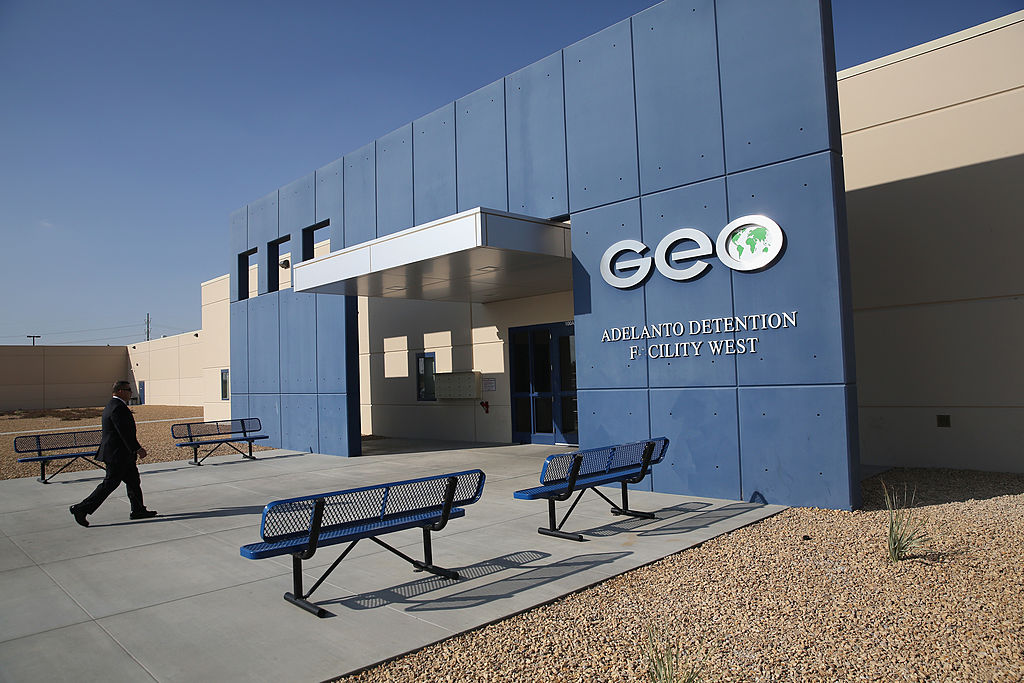 Melissa Castro had just given birth to her first son last February when she learned that her 27-year-old husband, Jose Ibarra Bucio, then held in U.S. Immigration and Customs Enforcement custody, lay shackled to a bed at Loma Linda University Medical Center after passing out at ICE’s Adelanto Detention Facility near San Bernardino. The nation’s largest for-profit prison firm, the GEO Group, operates the facility for ICE. When Castro arrived at the hospital, her husband lay in a coma — a doctor told her he had suffered a brain hemorrhage. He never regained consciousness and died March 21 after the family decided to discontinue life support.

To date, Castro still doesn’t know why her husband fell into a coma.

ICE released Ibarra Bucio from custody while he was still unconscious, thereby relieving itself of the responsibility of investigating his death.

An ICE statement released in April said, “Mr. Ibarra was released from ICE custody on an order of recognizance with respect to humanitarian concerns.”

“We should all have the right to know what happened to our loved ones,” Castro told California lawmakers on the Assembly Judiciary Committee last June, as she urged them to support Senate Bill 622, a measure introduced by Sen. Maria Elena Durazo (D-Los Angeles) that would require California’s attorney general to investigate deaths in ICE custody and report to the public on its findings.

SB 622 would also empower the AG to probe deaths like Ibarra Bucio’s, which occur within 90 days of a release from custody. The release of critically ill detainees by ICE isn’t uncommon, advocates say. Last June, The Washington Post reported that 25-year-old asylum seeker Johana Medina Leon, a transgender woman from El Salvador, was hospitalized with chest pain after six weeks in a New Mexico detention center. She was released upon her arrival at the hospital and died four days later.

ICE spokesman Bryan Cox said in an email that the agency doesn’t comment on pending legislation, but argued that fatality rates in California state prisons are far higher than those in ICE facilities.

However, Human Rights Watch, which supports the bill, has found that subpar medical care plays a part in many ICE detention deaths. The group’s latest report (June 2018) analyzed 15 such deaths that occurred between December 2015 and April 2017, and found that poor care contributed to 14 of them.

Clara Long, the organization’s acting Washington deputy director and one of the report’s authors, said that although ICE conducts its own detainee death reviews, “They are utterly insufficient when it comes to getting to the causes for the deaths in immigration detention. They don’t assign any blame very explicitly.”

Long noted that ICE investigations often begin weeks or even months after a death, when witnesses may be unavailable, and that ICE reviewers don’t seem qualified to properly assess the medical care provided to detainees. (ICE generally redacts the names and qualifications of detainee death review team members.)

“What we’ve seen is the agency noticing the same problem over and over without taking any steps to address the situation,” Long said.

For instance, in March 2017, 33-year-old Osmar Epifanio Gonzalez Gadba, a Nicaraguan citizen, hanged himself in his cell at the Adelanto Detention Facility. He was mentally ill but had been placed in an isolation cell, even though such solitary confinement is known to exacerbate mental illness. Guards failed to check on him at 30-minute intervals, as required, ICE’s detention death review revealed.

Two months later, JeanCarlo Jimenez Joseph hanged himself in a solitary confinement cell at the privately run Stewart Detention Center, which is operated in Georgia by CoreCivic. And in July 2018, Efrain de la Rosa took his life at Stewart under almost identical circumstances. In each case, detention center officials were aware of the detainees’ mental health issues and in Jimenez Joseph and de la Rosa’s cases, of their statements about suicide, and in each instance detention officers failed to perform cell checks at required intervals, documents show.

In addition to Human Rights Watch, the American Civil Liberties Union of California, the California Immigrant Policy Center, Disability Rights California and the Riverside Sheriff’s Association are among the bill’s backers

SB 622 would require the state attorney general to conduct immediate investigations of detention deaths and report to the public on its findings within 90 days.

The AG’s office, however, would have no power to require ICE to remedy any of the lapses that might have led to a death, and it would likely face resistance from ICE and its contractors while conducting its probes. The U.S. government filed suit against California after it enacted a number of immigration-related laws in 2017, including Assembly Bill 103, which requires the state attorney general to investigate conditions at all ICE detention facilities in California. A judge dismissed the government’s claims against AB 103, but the AG still didn’t gain full access to three of four of the state’s privately operated detention centers in time for the AG office’s first, February 2019 report, its authors noted.

Provided the AG can fully access the state’s detention facilities, AB 622 would bring transparency to ICE death investigations, which is a key goal of the legislation, its author Sen. Durazo noted in a hearing last June. Recent state investigations (like those conducted by the Georgia Bureau of Investigation at the Stewart Detention Center of the in-custody deaths of JeanCarlo Jimenez Joseph and Efrain de la Rosa) have brought information to light that ICE has delayed providing or failed to release.

Congressional appropriators recognized the problem in early 2018, when they added language to a funding bill requiring ICE to report on detention deaths. But immigration rights advocates claim that the reports are superficial and provide little insight into the circumstances surrounding the deaths.

The agency’s more comprehensive detention-death reviews are only available via Freedom of Information Act requests, and even then they are difficult to obtain. Capital & Main reported last December that it had requested 18 detainee death reviews in September 2017 and had only received 14. Now, nearly two years later, three of the reports have still not been released.

SB 622 passed the state Senate 31-7, with three Republicans joining the Democratic majority. Durazo spokeswoman Cristina Valdivia wrote in an email that the bill will likely go to the Assembly for a floor vote this week. The attorney general’s office has not commented on the bill – a spokeswoman for attorney general Xavier Becerra said his office is currently reviewing it. The governor’s office said it will evaluate the bill if and when it reaches Gov. Newsom’s desk.