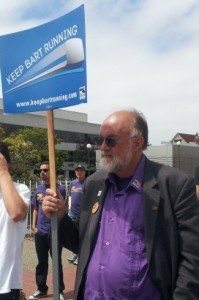 Negotiating a fair contract is a complex process that involves hard work and commitment from both labor and management. When both sides bargain in good faith and share a goal of securing a deal, a deal eventually gets done. I’ve personally been involved in many tough negotiations that ended with a fair deal that both parties could live with. It takes patience and willingness from both sides to compromise.

In the BART [Bay Area Rapid Transit] negotiations, unfortunately, that hasn’t been the case. BART management paid Thomas Hock, an out-of-state lawyer with a history of driving disputes to a strike, nearly $400,000 to lead negotiations. Hock and his company have been responsible for seven strikes, 47 unfair labor practice charges and nine discrimination lawsuits. Not exactly a history of committing to compromise in order to secure a deal.

True to form, Hock hasn’t been serious about negotiating a resolution at BART that would spare the Bay Area a strike. Instead, he’s taken several vacations since he’s been on board. When he has bothered to show up at the negotiating table, he’s stonewalled. And now Hock and BART management have stopped negotiating altogether and are preparing for a strike.

Even worse, BART is saying that it will run a number of trains during a strike operated by managers who lack the minimum requirements to safely get BART riders to and from their destinations. In essence, BART is willing to sacrifice the safety of riders by pushing this dispute to a strike so that they ultimately get their way. There’s no regard for workers. No regard for riders impacted by a strike. It’s BART management’s way or — literally — the clogged highway.

The BART unions have made significant compromises in recent days with the goal of averting a strike, including last week’s concession on wages. The unions have come to the table seeking honest, good-faith negotiations to broker a deal before the 60-day cooling off period ends. They’ve proposed a modest 4.5 percent wage increase over three years after a five-year wage freeze, while offering to contribute more to their health care and retirement. It’s a fair proposal given BART’s relatively strong financial position. The unions have also sought important safety protections for riders and workers including opening more restrooms and providing for more secure stations at night, only to be rebuffed time and time again by Hock and the BART management team.

There’s still time to come to a deal that would avert a strike and ensure the safety of BART riders isn’t jeopardized. But the unions can’t negotiate by themselves. It’s going to take a commitment from both sides to negotiate nonstop, if necessary, to get that done. If Hock and the BART management team continue to refuse to negotiate, there’s only one option: a strike. Elected officials and BART directors must demand that management joins the unions at the negotiating table for round-the-clock, good-faith negotiations until a fair settlement is reached.

There’s a lot at stake for BART workers and their families, as well as the hundreds of thousands of riders that count on BART to get to work, school and other destinations. Workers want to continue doing the job they’ve done exceedingly well for years. Riders want the trains to keep running. The only thing preventing a deal from getting done is BART management’s unwillingness to compromise. To avert a strike, that needs to change.

(Art Pulaski is the Executive Secretary-Treasurer and Chief Officer of the California Labor Federation. His post first appeared on Labor’s Edge is republished with permission.)

Alireza Mahdavi: Come Out, Come Out Wherever You Are!