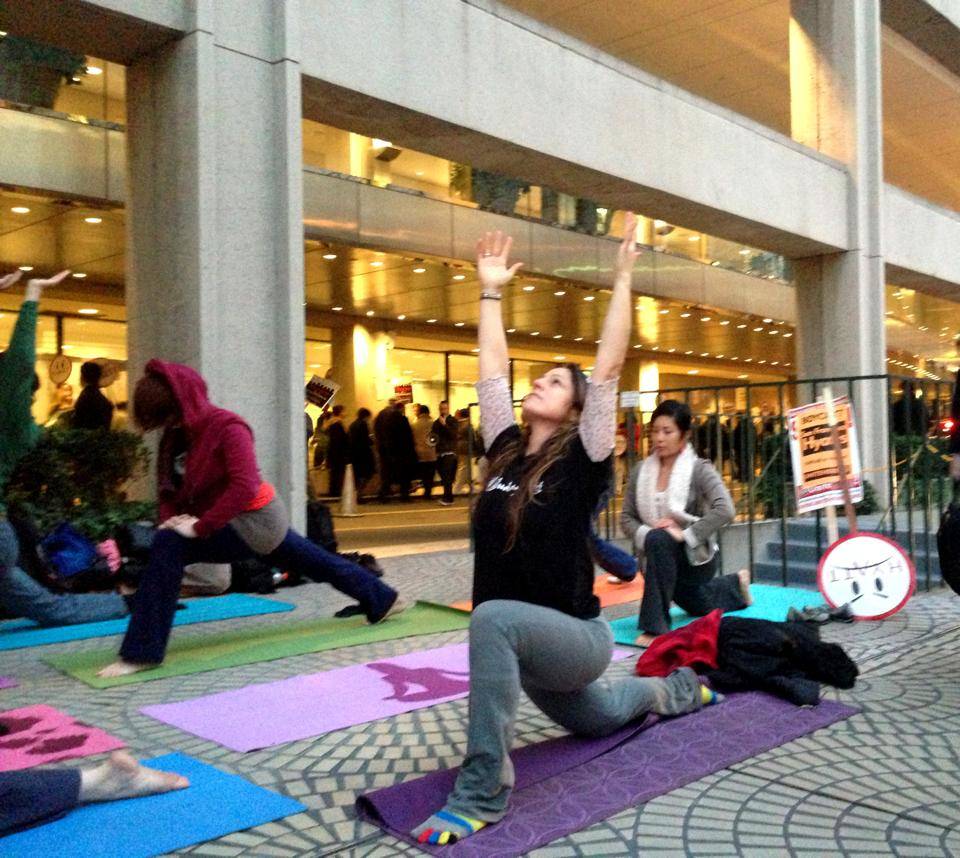 Each year, some 2,000 yoga enthusiasts assemble at the Hyatt Regency Hotel in San Francisco, California for “a great convergence of yogis of all ages and backgrounds,” states convention sponsor Yoga Journal. The extremely liberal and tolerant “City by the Bay” seems the perfect spot to spiritually and intellectually delve into yoga principles of social service and physical purification.

“But there is one huge problem,” according to 19-year veteran yoga instructor Sri Louise. “There is a huge disconnect with our ethical values by scheduling a convention at a union boycotted hotel that has a lousy safety record and mistreats it employees.”

A January 17 late afternoon picket by around 150 UNITE-HERE Local 2 supporters made this point loud and clear.

“This has been an active boycott with regular picketing for three years and Yoga Journal has not taken us seriously. But it is very serious that Hyatt has distinguished itself as the worst employer in the industry. It’s the worst of the worst.”

Walking on the picket line with Sri were several other yogis including trainee Stella Ng, a nurse at Summit Hospital in Oakland.

Yoga is for everyone, not just for improving yourself. So social justice is important. And I know how tough it is on housekeepers because I worked as a state employment counselor where workers were trained to clean a room and make a bed in seven minutes.

Ng’s professional experience dovetails with union complaints against Hyatt for housekeeper abuse, high injury rates and excessive workloads. Wong offered examples to back up the union’s claims that Hyatt is the “worst of the worst.”

Management requires non-union housekeepers in Baltimore to clean up to 30 rooms, more than double Local 2 contract standards; the NLRB [National Labor Relations Board] is currently conducting a hearing [about allegations of] Hyatt retaliation against outspoken employees; and, finally, Hyatt leads the industry in contracting out its housekeeping department. It is the Walmart of the industry.

Just like Walmart, Wong explained, Hyatt wants third-party contractors to perform work so that the “responsibility for the hotel’s rotten safety record and mistreatment of immigrants and women can be passed off to them.”

“UNITE-HERE has filed 12 complaints against Hyatt with CAL-OSHA and the most recent settlement at Fisherman’s Wharf had all the ergonomic complaints withdrawn. We take the well-being of our housekeepers very seriously and we will continue to be diligent about the training and tools they have to perform their jobs safely. These charges and the boycott are part of an overall corporate campaign by UNITE-HERE aimed at Hyatt.”

Evidently, Martin felt compelled to publically respond to Hyatt claims that CAL-OSHA charges were not about injuries to housekeepers but just some paper work process violations. Hillan’s statement to me that the CAL-OSHA settlement “had all the ergonomic complaints withdrawn” seems to also infer only technical violations were noted and that no actual physical injuries were sustained by employees.

On the contrary, Martin’s public statement emphasized in response to Hyatt claims:

“Cal/OSHA believes it found plenty of evidence both of injuries sustained by housekeepers, as well as violations of Cal/OSHA regulations. It is technically true that [citations] were withdrawn, but that was the outcome of an in-depth settlement negotiation…”

So there you have it. A convention of respected and honorable yogi masters, instructors and trainees who certainly all agree with the “principle of truthfulness and of being sincere, considerate and honest,” but who seem to be unable to agree that it is simply very “bad Karma” to cross a picket line of employees striving for their own peace of mind, respect and consideration from a money-making global corporate giant who just can’t seem to get their story straight.

Perhaps misleading Hyatt executives would benefit from yoga classes themselves but, first, our friends at Yoga Journal should perhaps re-examine their own venerable and heartfelt practices.

(Carl Finamore is a delegate to the San Francisco Labor Council, AFL-CIO. His post first appeared on Labor’s Edge and is republished with permission.)

Related Topics:Hyatt Boycott
Up Next