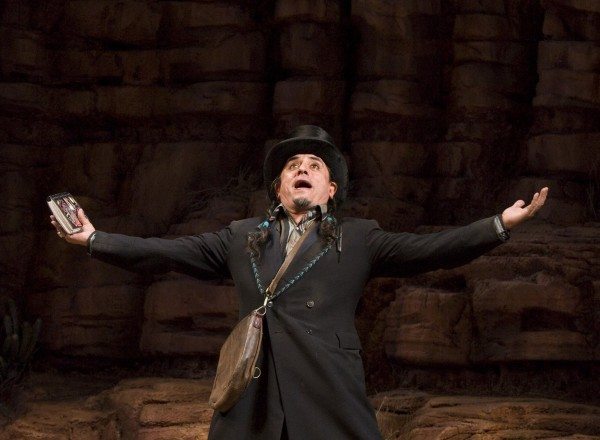 [printme]Richard Montoya got a surprise not too long ago. The playwright-performer of L.A.’s satirical comedy troupe, Culture Clash, discovered that a book of plays his company had performed over the years had been swept up in a contemporary American controversy. Namely, the shutting down of the Mexican-American Studies Program at Tucson Magnet High School. The book was part of the program’s curriculum until Arizona’s Attorney General, Tom Horne, found the  program to be insufficiently patriotic under a new state law.

Horne will be appearing before the Ninth Circuit Federal Court of Appeals in a matter of months. Meanwhile, Montoya’s new play, American Night – a picaresque view of American history through the eyes of a Mexican immigrant – has received good reviews at the Oregon Shakespeare Festival in Ashland, where it is being performed through September. The Tucson brouhaha re-ignites a debate about the purpose of American political theater with a social justice message.

That a play should have any message at all is anathema to literary traditionalists in the theater, who believe that plays are at their best when revealing emotional truths rather than scoring political points. Were that argument universally believed, Athol Fugard would have been muzzled in South Africa when he wrote plays about the atrocities of Apartheid – even though his plays helped end Apartheid; Vaclav Havel would have been muted in Czechoslovakia at the time his plays were railing against the absurdities and hypocrisies of Soviet-style communism – even though Havel’s plays helped bring down the curtain on Czech communism; and Tony Kushner’s Angels in America would never have seen the light of day, though Kushner’s penchant for gay rights has become his calling card.

The complaint of the traditionalists isn’t, ostensibly, about the playwrights’ particular political views, but about any political views appearing in a work of drama – about, say, Julius Caesar showing up dressed in U.S. Army fatigues. Because for traditionalists, what’s political is topical, and what’s topical is temporal, and what’s temporal isn’t eternal — and therefore isn’t important. Shakespeare, their argument goes, endures because he mashes up an array of political perspectives while preaching none. Even though in Shakespeare’s canon, England never loses the war – a conclusion at odds with the historical record. This is what happens when a writer is funded by the King or Queen of England.

In the last 30 years or so, political theater, dealing largely but not entirely with identity politics, has latched itself to comedy as a way hurling a political  javelin and actually seeing it land on target: From the San Francisco Mime Troupe, to Culture Clash (which was born in San Francisco’s comedy clubs), and culminating in the increasingly earnest television theater of Jon Stewart.

It’s easy to forget that Arthur Miller’s now internationally admired family drama, Death of a Salesman, caused considerable consternation when, in 1949, it appeared to be questioning the veracity of the American Dream. Such questioning also occurs in Montoya’s American Night, now presumably banned from Tucson High’s classrooms along with the rest of Culture Clash’s work. Plays are purged and burned because they pose a threat to traditional understanding, thereby securing their immediate relevance and reason for being.  The topical-versus-eternal argument that tries to diminish the importance of  current issues – simply for being current — may be a front for something far more eternally sinister.