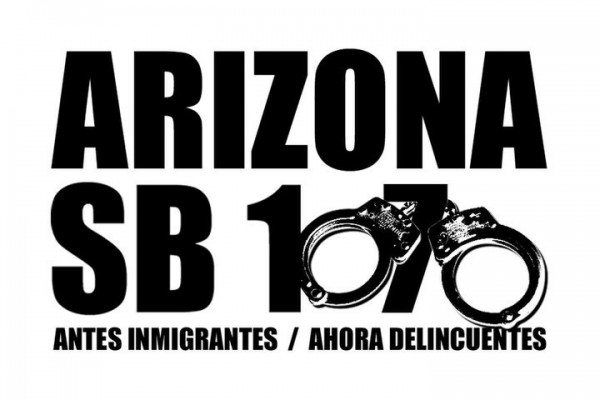 Yes, the inspiration for the most draconian anti-immigrant legislation in the nation, a measure that permits law enforcement to ask about immigration status, one that swings the door wide open for racial profiling—SB 1070—reportedly sprang from a moment of inspiration at a Walmart checkstand.

This origins story is brought to you courtesy of the Ministry of Citizenship, a faux MinuteMan-style group that purports to be a fan of the legislation.  According to the Ministry, it happened this way:  state representative Russell Pearce, the measure’s sponsor, “hatched the idea for SB 1070 late one night while waiting in the checkout line at Walmart.”

“Here I was just trying to buy some Cheetos and cat litter, and the crowds were just horrendous,” the Ministry quotes Pearce as saying. “My rights as an American really should mean something.”

If we’re hearing Russell Pearce’s dog whistle clearly—and we are—Russ’s rights were abrogated by all those Latino customers getting between him and his Cheetos and cat litter.

Clearly his only recourse was to champion a discriminatory law. (Russ may have more time to cultivate patience these days—a November 2011 recall election removed him from office.)

An apocryphal checkout-line brainstorm, though, is not Walmart’s most significant connection to SB 1070.

Pearce enthusiastically carried the water for and is the face of the SB 1070 legislation. But NPR tracks the measure’s creation to the American Legislative Exchange Council—known by the innocuous acronym ALEC.

The American Legislative Exchange Council was founded in 1973 by Paul Weyrich, the brains behind the right wing political infrastructure that set the stage for the Reagan Revolution and shifted national policy debate to the right.

It should be noted that Pearce has denounced the NPR report as “a lie” for alleging that discussions at ALEC helped the law take shape, saying he had a fully drafted bill prior to taking it to ALEC. What is not disputed is that Pearce brought it to an ALEC task force for discussion before it was introduced in the Arizona Senate.

Walmart and other corporations provide donations for ALEC. They shovel buckets of cash toward lawmakers, also ALEC members, who promote the legislation that pumps up the bottom line, even if civil rights get trampled along the way.

This makes good sense if you are Walmart. ALEC has been a long-time promulgator of anti-labor legislation.

Anti-union policy is part of the ALEC gospel and intrinsic to Walmart’s DNA.  The company indoctrinates employees against unionism from hire, holds workers in “captive audience” meetings that declaim the dangers of unionization and requires managers to report any organizing efforts on the Union Hotline that goes straight to Walmart’s Bentonville Arkansas headquarters.

Despite ALEC’s enormous policy influence over the past four decades, it operated largely under the public radar until the tragic Trayvon Martin case became a national flashpoint.

ALEC, it turns out, has wielded enormous influence in promoting the stand-your-ground laws that provide gun owners wide discretion in decisions to open fire. The Florida stand-your-ground policy was behind the initial release of George Zimmerman, now facing second-degree murder charges in Martin’s shooting death in February.

“A Wal-Mart executive, Janet Scott, was the co-leader of a criminal justice committee at Alec that in 2005 unanimously supported strengthening self-defense laws in shooting incidents,” the New York Times said in a recent story.

Since Walmart is the top purveyor of shotguns and ammunition in the United States, it’s not hard to see how trigger-happy policies benefit America’s Largest Retailer.

ALEC also aggressively promotes the noxious voter suppression legislation sweeping the states–designed to exclude the young, the poor and people of color whose ballot choices could propel the kind of change corporations don’t much care for.

Arizona “has been at the forefront of ALEC’s voter suppression agenda,” writes Donna Gratehouse for AFL-CIO Now.  Between SB 1070 and its successful strategies to trammel upon voter rights, Arizona looks like a ALEC’s laboratory run amuck.

The NPR story that details ALEC’s pivotal role in crafting and promoting SB 1070 doesn’t name Walmart as the key architect. The Corrections Corporation of America, the nation’s largest operator of privatized prisons, claims that spot.  NPR reports that CCA executives believe immigrant detention is their next big market.

Not to say Walmart doesn’t also benefit from Arizona’s privatized prison industry. It does look like Walmart maintains its famous low prices with help from Arizona prison labor—women working for $2.00 an hour under brutal conditions. TruthOut provides a disturbing account of women prisoners’ daily life in service to Walmart’s largest supplier of organic melons, Martori Farms.

(This according to a 2007 Walmart release; a search on Walmart’s corporate site provided no updates.)

ALEC, backed by Walmart and other corporations, is engineering the extreme free-market mayhem and racist policy that has become Arizona legislation.

As of April 10 2012, CNN reported that more than 300 companies were part of ALEC. Some are dropping out, feeling the heat from a campaign led by Color of Change.org, founded after the Hurricane Katrina disaster to provide a louder voice for African-Americans.

Companies long considered to be America’s sweethearts have bailed on ALEC—Coca Cola, Kraft, Wendy’s. But Walmart? Even with increasing scrutiny for its role in promoting stand-your-ground legislation, even with a burgeoning scandal related to allegations of $24 million in bribes in Mexico and a cover-up at corporate headquarters—Walmart stands its ground for poverty employment and racial discrimination, remaining a large contributor to ALEC.

Related Topics:ALECArizonaSB 1070WalmartWalmart LA
Up Next

How to Tax California’s One Percent