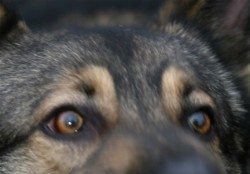 you want dogs? I walked all four shepherds
in the park, by day and dark
and nobody dared come near; bark?
all they had to do was walk,
the four big shepherds in the park

love? you want love? I hardly miss her;
but her dogs I walked
by day and dark, yes,
I miss the dogs, the four
big shepherds in the park.

Originally from Brooklyn, N.Y., Austin Straus has been drawing and painting since childhood, but began writing seriously in his mid-thirties. His poems and illustrations have appeared in such literary magazines and anthologies as Caliban, Grand Passion, Jacaranda Review, Red Dance Floor and The Maverick Poets. Known as the host of KPFK’s The Poetry Connexion, he produced the show from October 1981 through early 1996.