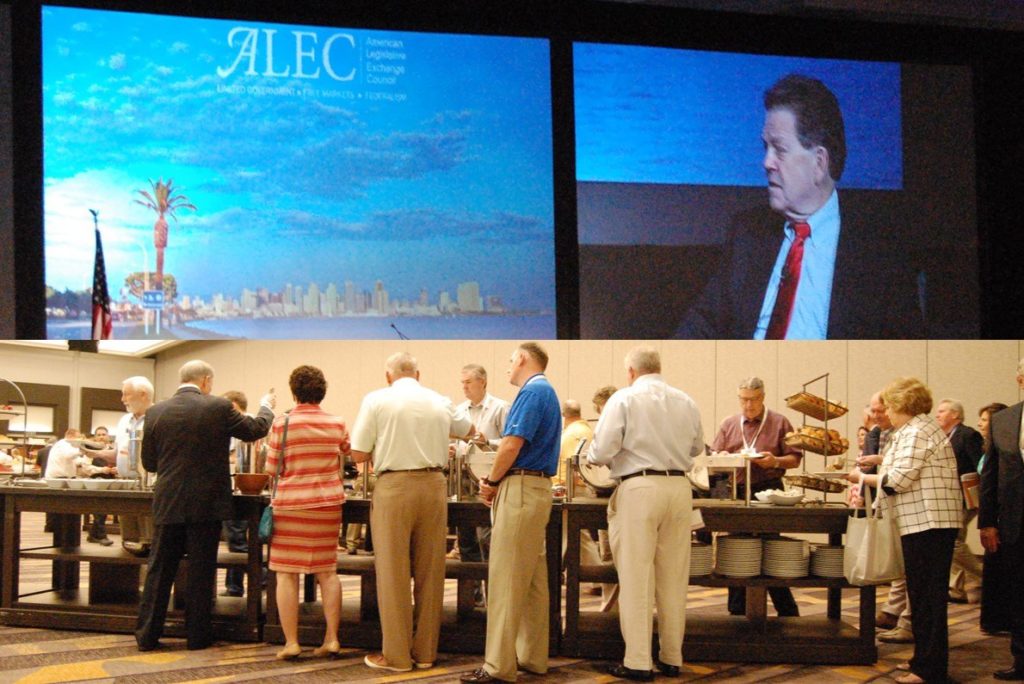 “The biggest scam of the last 100 years is global warming!” thundered Stephen Moore to ALEC’s plenary breakfast club this morning. “It’s no surprise that when you give these professors $10 billion, they’re going to find a problem.”  Moore then singled out North Dakota for its regulatory-free attitudes toward the fracking industry: “I just have one message for you — drill, baby, drill!”

The annual meeting of the American Legislative Exchange Council began wrapping up business in San Diego Friday on this defiant note from Moore, a former Wall Street Journal writer. This newly hired Heritage Foundation economist is an apostle of completely eliminating state income taxes  and has been in a running feud with liberal economist and New York Times columnist Paul Krugman, over Moore’s casual regard for accurate reporting.

Moore’s speaking partner today was fellow supply-sider Arthur Laffer, the former economic guru of the Nixon and Reagan administrations, perhaps better known for the Laffer Curve, a graph that essentially purported to demonstrate how lowering the tax rate for the One Percent would reap the highest tax revenues for the country, rather than its now-historic levels of income inequality.

Laffer and Moore: Taxes equal economic death and are the cause of California’s income inequality.

Together with tax reform zealot Jonathan Williams, the two men publish ALEC’s annual Rich States, Poor States report card that rates states based on their adoption of ALEC laws. The pair have just collaborated on a new laissez faire potboiler, An Inquiry into the Nature and Causes of the Wealth of States: How Taxes, Energy, and Worker Freedom Change Everything.

With California Board of Equalization member (and the state’s highest Republican officeholder) Diane L. Harkey moderating, Moore announced to the assembly of state legislators and corporate lobbyists that it was a good time for ALEC.

“When I look at the 50 states list, we are winning,” he declared before triumphantly citing the recent adoption by Michigan, Wisconsin and Indiana — “Three states in the Midwest and the cradle of unionism” — of right-to-work laws. To that victory list he added North Carolina for its draconian unemployment benefit cuts, and Nevada for passing an unprecedented evisceration of its public education system.

But mostly the breakfast talk came down to the repeated reiteration that taxes — any taxes — equaled economic death and socialism, and were the cause of California’s high rate of income inequality.

Laffer zeroed in on California public school teachers as his favorite example of government waste. He said that although state teachers are the highest paid, according to the National Assessment of Educational Progress  test scores they are doing the “fourth worst” job in the country.

Laffer and Moore ended  with a call to repeal state income taxes of any kind.

The room erupted in enthusiastic applause.

This Thursday: Medicare is Having a Birthday Party