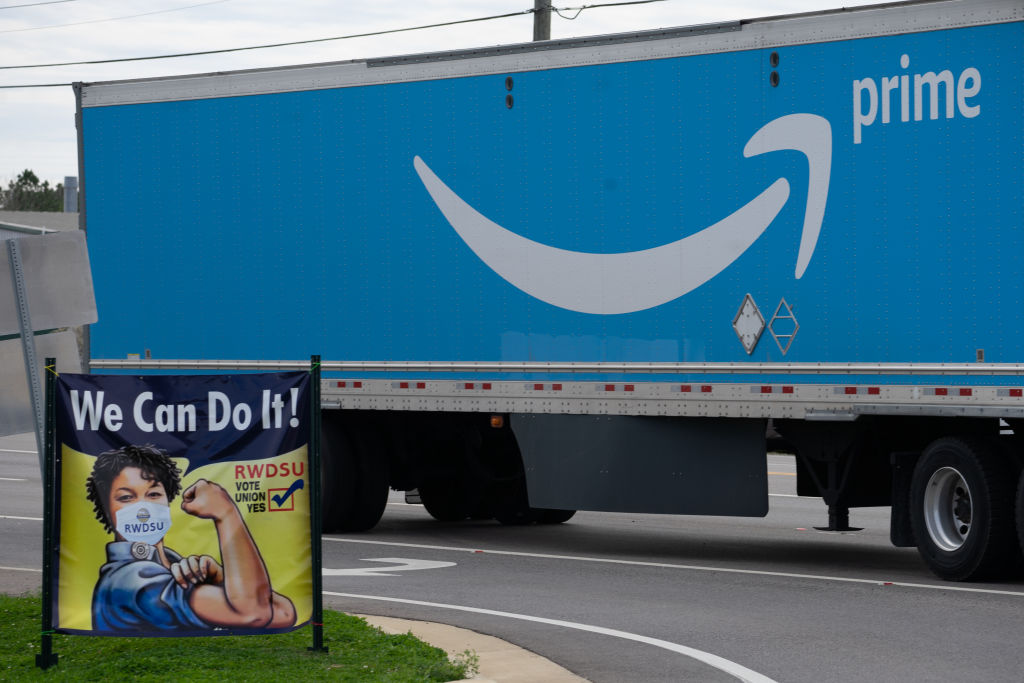 The union organizing drive at the mammoth Amazon “fulfillment center” in Bessemer, located 20 miles south of Birmingham, Alabama, has the feel of both a social and religious movement. There are 10 days until the mail-in ballots will be counted to determine whether the company’s 5,800 employees will gain union representation. On Wednesday organizers and workers gathered at the Retail, Wholesale and Department Store Union’s scruffy office to go over their final push and to talk to reporters from around the world who have descended upon Birmingham.

Jennifer Bates, an African American “learning ambassador” at the Amazon facility – she trains new workers – believes that her courage to fight the corporate giant comes from a spiritual source, “the Almighty, the creator of all things.” She also traces her personal strength to the civil rights movement that rocked Birmingham in the early 1960s. “I really believe that in this organizing drive we are following the foot soldiers who came before us,” she says.

More than wages or benefits, the organizing drive at Amazon is about dignity and respect for workers.

Josh Brewer, the union’s lead organizer, is an ordained minister from Michigan who found his way into the labor union movement while trying to ensure his life had purpose, and he was immediately given some of the toughest organizing challenges. Brewer sees the Amazon campaign as a “David versus Goliath” battle, his biggest career challenge so far.

On this day Brewer has one eye on the office television to see if a tornado sweeping through Mississippi and Alabama is going to require moving into the basement, as he reflects on the five-month and 24-7 commitment that he has made to the unionization effort. “Black workers in the South are fed up, but so is the middle class and so is the rest of the country,” he says.

The David and Goliath analogy is appropriate. Amazon’s worldwide power combines and directs enormous economic, technological and cultural resources toward making sure that the mostly African American and female workers in Bessemer are convinced that a union is the last thing they need.

Since the union drive began five months ago, Amazon has spent millions of dollars on anti-union consultants who have deployed familiar tactics to dissuade workers from voting for the union. According to Amazon worker Darryl Richardson, the “captive audience” meetings that employees are required to attend are where the anti-union message is hammered home.

“In these meetings Amazon implies that they will close down the facility if the union comes in. They say we won’t get our pay raises and that all the union wants is dues money for themselves,” he says. “We’re working for the richest man in the world. Amazon looks good on the outside, but inside it’s a totally different story.”

In response to questions, an Amazon spokesperson claimed, “Our employees choose to work at Amazon because we offer some of the best jobs available everywhere we hire, and we encourage anyone to compare our total compensation package, health benefits, and workplace environment to any other company with similar jobs.”

Still, Amazon has been sanctioned for intimidation and violations of labor law at other facilities by the National Labor Relations Board. Organizers insist that the penalties are so minimal that there is no incentive for the company to desist.

Brewer regards Amazon’s captive meetings as the most effective strategy that the company has used to intimidate workers, a freedom U.S. companies enjoy but which is forbidden in countries that have more progressive labor laws. “These powerful corporations,” he insists, “can disregard the laws that we do have in place but face no repercussions, no fines, no jail time and they go home at night and know they will have no concerns.”

The convergence of issues of race, class and gender have crystalized in a symbolic and material way in Bessemer.

According to pro-union workers, Amazon has perfected the surveillance workplace. How many “picks” a worker can make – the pulling of products from computerized pods – is calculated by the minute. Company designated “Time Off Tasks” for going to the bathroom or getting a drink of water are also precisely measured. There are no “safe spaces” away from the lens of a camera or the oversight of a supervisor.

Richardson, who was one of the first workers to contact the union about possible representation, points to pervasive management oversight that extends even into restrooms. “They have anti-union flyers in the bathroom, in the break room and cameras over your work station and even in the parking lots.”

Bates says employees are regularly searched by security guards on the lookout for workers stealing product. “They make you empty your pockets, take your shoes off when you are going for your break. It’s a power they are using on us, and you accept it or you lose your job.”

It’s clear that support for the union is not overwhelming and that a victory for organized labor is far from certain. Sirlena Harris moved from Tuscaloosa, Alabama, six months ago to work for Amazon and is satisfied with the pay and benefits at the warehouse. At the Circle K gas station just outside the facility she expresses support for the company. “Amazon as a whole is a good company. We don’t need no union as we have everything we need there.”

The massive warehouse sits on a hill in Bessemer, a largely African American city with one of the highest poverty rates in Alabama. Bessemer is a former steel town with a rich union history. Six thousand jobs that pay in the $15 an hour range with some benefits were considered by local boosters to be a boon for the area.

Union organizer Michael “Big Mike” Foster argues that Jeff Bezos, the multibillionaire owner of Amazon, set up in Bessemer to leverage the promise of job creation in return for complete control over a desperate workforce. “Do the math,” Foster says. “Fifteen dollars an hour after taxes is roughly 20 grand. There is no place that I know of where $15 an hour for a family is enough.”

When asked why he was “moonlighting” at Amazon while sitting in a city patrol car, the policeman replies, “Take it up with management who signed a contract with Amazon.”

Big Mike can be found every morning at 3 a.m. with signs outside the facility’s gates urging workers leaving their overnight shift to vote yes for the union. Even though most of the ballots have already been mailed in, he wants to make sure the workers and the company know the union hasn’t gone anywhere.

From where Foster stands you can see the warehouse stretch the length of 13 football fields surrounded by a massive parking lot. At the entrance to the parking lot a Bessemer City Police Department patrol car sits watch. When asked about his presence as security, the policeman sitting in the car says he is “just moonlighting” and not on the city payroll. As for why he is driving a city police vehicle he replies, “Take it up with management who signed a contract with Amazon.” (The company would not address on the record questions about its use of off-duty police officers.)

For Bates and Richardson the organizing drive is not about wages or benefits, although Amazon has done their best to convince workers that the company has their best interests in mind. While they do believe that Amazon can significantly increase pay, health care coverage and pension benefits, for them, dignity and respect are what they are demanding and what sustains their effort.

“A guy like Jeff Bezos wants us to continue to believe that we’re not valued. And that what he’s given us is enough,” Bates says, waiting at the union office for interviews with Swiss, French and Italian journalists. Richardson, who admits to initially being afraid of losing his job when he called the union, says his fighting spirit sustained him through his doubts. “I ain’t no better than nobody else and I hate to see people getting mistreated.”

In 1963 when Martin Luther King Jr. was reflecting on the anti-segregation campaign in Birmingham, then considered one of the most racist cities in the South, he pondered what the impact of success there would mean. The effort “could, if successful, break the back of segregation all over the nation,” King wrote.

The workers and organizers see this union campaign with the same seriousness of purpose. Events of the past two years have made it clear that the convergence of issues of race, class and gender have crystalized in a symbolic and material way in Bessemer.

How much wealth and power should one person and one company have? What is the best way for African Americans and the broader working class to fight for economic and social justice? Many workers here think they know the answer to those questions.

“What is Bezos afraid of?” Richardson asks. “You know it ain’t really about the money, because he has the money. It’s about power. It’s about employees having a voice.”