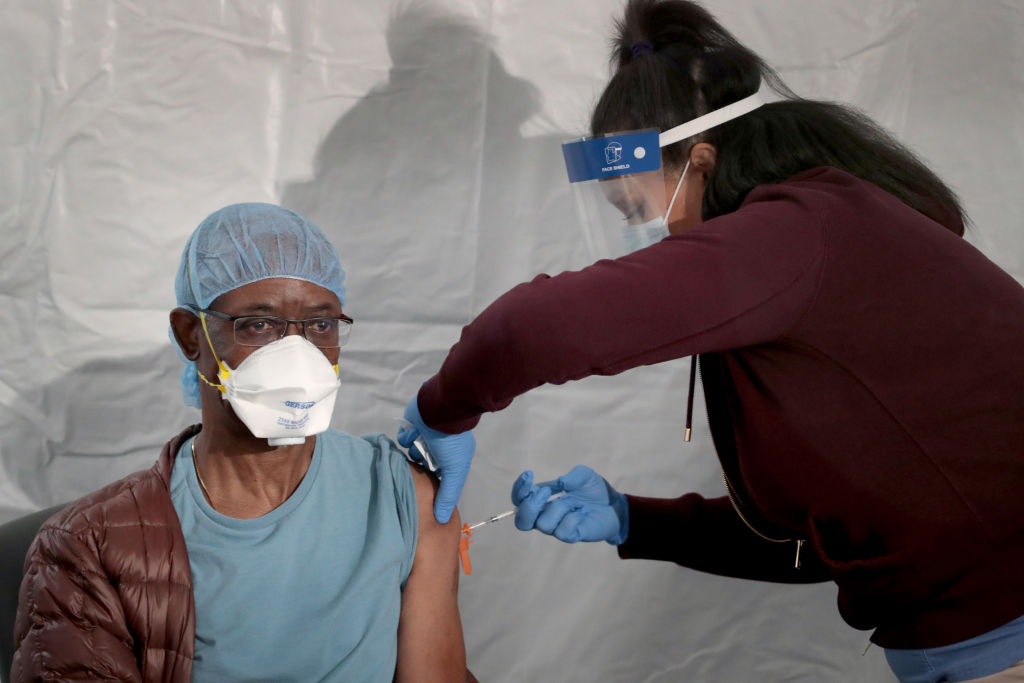 To some, the report was stunning. On the subject of a vaccine that would inoculate them against the COVID-19 virus, 57% of Californians told pollsters they definitely or probably would take it if it were available to them today. But among the state’s Black residents, that percentage fell by almost half.

How could only 29% of Black Californians be willing to take a vaccine that might save them? For the people who live and work in communities of color in the state, that is almost certainly the wrong question.

The right question, they say, is: How does a state – and a nation – move to address practices that have built a deep distrust of such institutions as the health industrial complex in the first place?

Black Americans have generally participated in lower numbers when it comes to vaccines of all kinds, including those for chickenpox, polio, measles-mumps-rubella, etc.

“The primary problem, quite bluntly, is that because of the historical evidence that African American communities have been victimized through systemic racism by our medical and health professional systems, the community continues to be reluctant to participate in those systems,” said Michelle Burton, of the Los Angeles-based Community Health Councils. “It is very understandable.”

That reluctance is reflected in the national numbers. In an October survey conducted jointly by the Kaiser Family Foundation and ESPN’s The Undefeated (the site examines sports, race and culture), only six in 10 Black adults said they trusted doctors to do what is right most of the time, compared with eight in 10 whites. Pew Research Center data, meanwhile, showed that just 32% of Black Americans would definitely or probably get a COVID vaccine, a figure in line with the California poll.

Moreover, Black Americans have generally participated in lower numbers when it comes to vaccines of all kinds. The U.S. Department of Health and Human Services reported that 52.8% of whites over age 18 received the flu shot in 2019-20, compared with 41.2% of Blacks. When it comes to the number of children age 19-35 months who were fully immunized for chickenpox, polio, measles-mumps-rubella, etc., whites were at 71.5%, Blacks at 66.5%.

At a time when California is experiencing a slow statewide rollout of both the Pfizer and Moderna vaccines, these numbers provide a reminder that they can’t flip a switch and expect to see communities of color line up for their shots – not even in the midst of a pandemic. And that reluctance, though certainly current, is by no means a new development.

“Is there mistrust for vaccines and for the health care system in Black communities? Yes. But that mistrust is very well earned,” University of California, Davis Medical Center physician Dr. Tiffani Johnson told Los Angeles Times columnist Erika Smith. “So I think that we, as physicians and researchers and health care systems, need to take a step back, and instead of saying, ‘Why won’t Black folks trust us?’ say, ‘What have we done to earn trust?’”

Long-debunked notions about Black people’s tolerance for pain still lead to inequities in treatment, including inadequate measures to mitigate pain among Black patients.

From the long-lasting damage done by the Tuskegee Study to continuing evidence that pregnant Black women suffer disproportionately worse health outcomes than do white women, the question of trust is central. In the early days of COVID, the New York Times reported, research showed that Blacks who visited hospitals with symptoms of the virus were less likely than whites to be tested or treated, and the Centers for Disease Control later advised health professionals not to let bias affect their treatment during the pandemic.

There is also plenty of evidence suggesting that long-debunked notions – about Black people’s tolerance for pain, for example – are still embraced by some in the medical community today. A 2016 study found that half of the medical trainees and residents surveyed held one or more demonstrably false beliefs about the physical and pain-tolerance differences between Blacks and whites. Such beliefs lead to inequities in treatment, including inadequate measures to mitigate pain among Black patients.

Burton, who earned her B.A. in Pan African Studies before moving on to an MBA and then a Ph.D. in Leadership and Change, has spent most of the past three decades in community and social-service settings. That includes her work with Community Health Councils, a group that tries to match local needs with citywide policy through advocacy and cooperation.

Through both her work and her life experience, Burton said, she has a strong expectation about how the Black community’s hesitation on the COVID vaccines will be received.

In a state the size of California, herd immunity requires a far-reaching vaccination effort that crosses all communities, especially lower-income neighborhoods and communities of color.

“The conversation tends to go where we generally do, which is to blame the victim and make it their responsibility. We’re sort of being set up, as usual, as the problem,” she said. “And then when the vaccine isn’t completely deployed in a fashion that everyone is satisfied with, they can come back and say, ‘Well, we told you we were going to have this problem with these people again,’ instead of saying, ‘We as a nation have a problem of systemic racism, and because of our problem of systemic racism in America, we may have trouble deploying this vaccine.’”

On that front, California officials and health executives appear aware of the pushback. Covered California, which acts as the state’s medical insurance marketplace, is teaming up with health leaders to encourage Black residents to receive the vaccine and to sign up for health insurance. Data from the California Department of Public Health shows that Blacks account for 6% of the state’s population, but 6.9% of its COVID-related deaths.

Distrust of the health system “is deeply rooted, and based on injustices and unethical treatment that many Black Americans have experienced in our medical institutions,” California Surgeon General Dr. Nadine Burke Harris said in the news release. “It is imperative that we engage with communities to address their concerns, so that all of our communities can feel confident that these vaccines are safe and that they are our key to defeating this virus.”

The ultimate goal of widespread vaccinations is herd immunity. Although an exact figure of the number of people who would need to be immune to the coronavirus to achieve that is hard to come by, infectious diseases expert Dr. Anthony Fauci recently put it at upward of 90%.

In a state the size of California, that requires a far-reaching vaccination effort that crosses all communities, especially lower-income neighborhoods and communities of color, where infection rates have been high and access to health services is often dramatically limited.

That won’t happen without a concerted effort to promote the safety of the vaccines – and, Burton suggested, without an honest acknowledgement that Black residents have had good reason to treat any such process warily. Nothing about the Trump years in the White House, she said, has made that effort easier.

“The administration in [Washington] D.C. [over] the last four years has provided a new stage for racism, and I would say even for white supremacy . . . and that is scary for people,” Burton said. “This should not be a mystery to folks as to why African Americans are not going to be the first in line for this vaccine.”

Pandemic Nation Podcast: One Patient at a Time