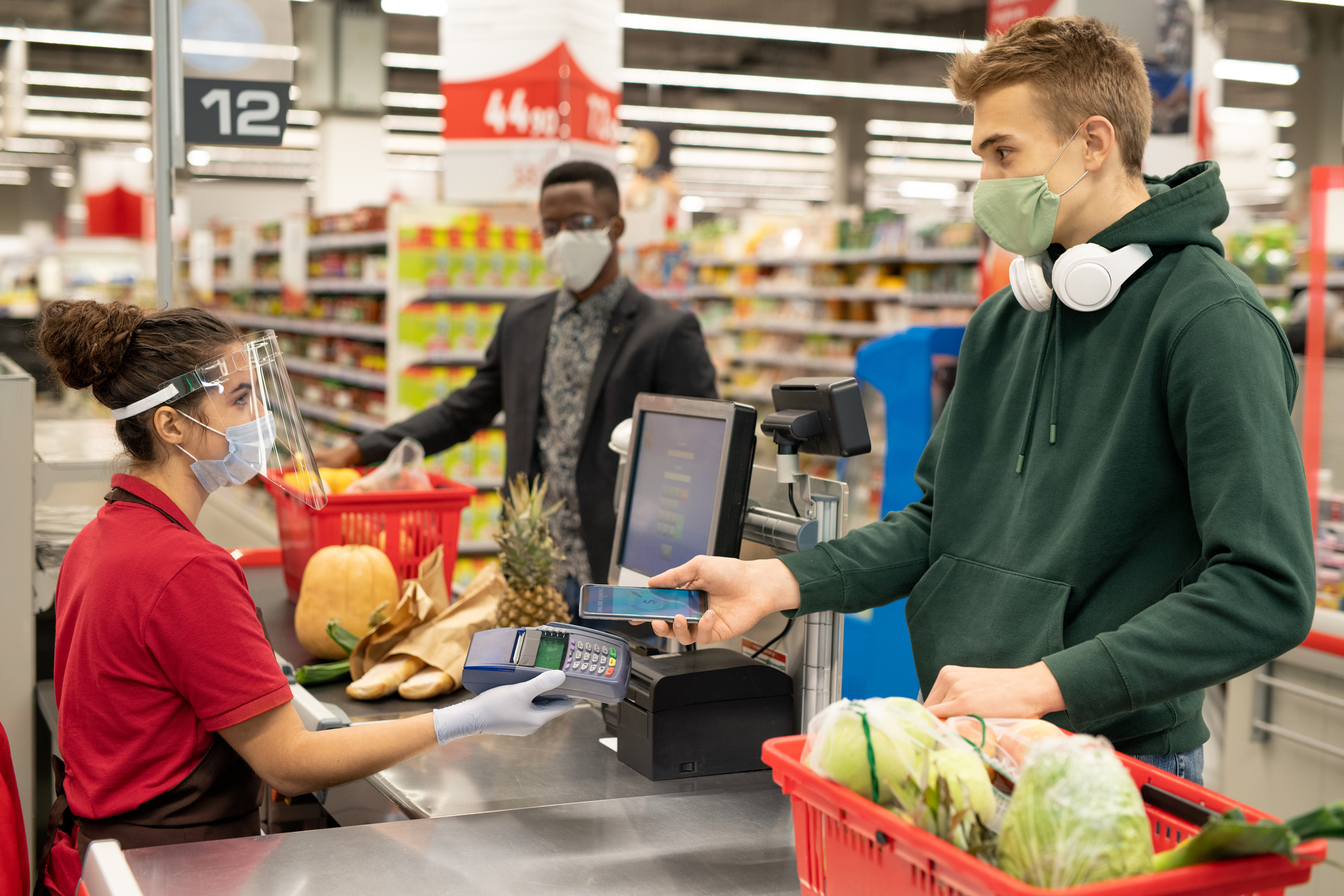 For two years as the pandemic consumed day-to-day life, supermarket workers literally risked their lives to keep shelves stocked and customers fed. Deemed “essential,” they nevertheless retained their low status as they took on more responsibilities. Workers were wiping down shelves, products and shopping carts, not to mention handling testy customers who could occasionally get physical about mask-wearing requirements.

Grocery workers had teetered for weeks at the edge of a strike that could have seen picket lines at local Ralphs, Vons, Pavilions and Albertsons stores from the southern border up through California’s Central Valley. After a tentative deal was reached April 4, an agreement ratified on April 14 averted that strike in a major way.

The raises included in the new agreement are some of the most significant for supermarket workers in years — and move California supermarket workers away from the Walmart model: low pay, split shifts and uncertain hours that make it impossible to plan schedules or budgets.

Daniel Flaming, president of the Los Angeles Economic Policy Roundtable, a Los Angeles-based nonprofit organization, said the new agreement “changes the landscape for all retail workers around the country. It’s now clear that the Walmart model of poverty wages and part-time jobs doesn’t work as a way to provide jobs for working people in America.”

Had California workers gone on strike, it would have cost grocery chains hundreds of millions of dollars, said Peter Dreier, professor of politics and urban and environmental policy at Occidental College. “They weren’t prepared for that kind of loss. It was pretty clear that public opinion was on the side of the workers.”

Dreier, along with Flaming, is an author of the January report “Hungry at the Table,” which surveyed more than 10,000 Kroger grocery workers and describes working conditions in 20 counties across Washington state, Wyoming, Colorado and much of California.

They see the new contract as a seismic shift in the grocery industry landscape.

The three-year contract between the United Food and Commercial Workers union and Ralphs and Albertsons/Vons/Pavilions includes a $4.25/hr. increase for most workers — and some will see higher pay raises. (Disclosure: UFCW is a financial supporter of Capital & Main.)

Significantly, the contract increases the minimum weekly hours of work for eligible part-time employees — a policy that could mean take-home pay increases of as much as $3,000 per year for some employees, a union news release says.

“We are pleased that this agreement allows us to put more money in our associates’ paychecks and secures healthcare and pension plans,” Robert Branton, vice president of operations at Ralphs, said in a statement.

The pandemic framed recent discussions, but also hanging over negotiations: the ghost of a 141-day grocery strike that rocked Southern California in 2003-2004.

Had a strike ensued, picket lines could have been a further test of patience for cranky, pandemic-fatigued consumers.

Grocery store employees are more than exhausted by their role as “frontline workers.”

It would have been a further stretch for grocery workers to manage already-strained finances on strike pay.

The pandemic framed the recent discussions, but also hanging over negotiations: the ghost of a 141-day grocery strike that rocked Southern California in 2003-2004.

The labor struggle put picket lines outside stores and forced customers to decide which side they were on.

Neither the employees nor the grocery chains wanted to see that this time.

Ralphs employee Erika Bentzen remembers that strike well — she walked a picket line at the time. The 37-year veteran worker at a Ralphs in Thousand Oaks, California, has spent most of her career on what’s called “night crew” — stocking shelves from midnight to 8 a.m. — with her shift leaving as the day shift checkers and clerks’ assistants show up in the morning.

Kroger is the parent company of Ralphs Grocery Co., the market chain Bentzen works for.

The company’s annual revenue for 2021 was $132.5 billion, up over 8% from 2020, and its market value is $35 billion. It has the biggest share in the U.S. supermarket sector. Kroger, headquartered in Cincinnati, Ohio, is ranked No. 17 in the Fortune 500 based on total revenue. As such it exerts a large gravitational pull in the U.S. grocery market.

“We’re your friends, your neighbors. We’re part of the community. We had the public behind us.”

The company has a big footprint historically as well.

In 2005 Ralphs Grocery Co. was indicted for actions during the months-long strike when Bentzen walked a picket line — illegally hiring hundreds of workers under fake names.

Ralphs Grocery Co. pleaded guilty to felony charges including identity theft, money laundering, obstruction of justice, false use of a social security number and conspiracy arising from the company’s practices during the lockout. The court imposed a $20 million fine and ordered Ralphs to pay $50 million in restitution.

Kroger was not charged in the case.

Bentzen recalls the consumer support during the lockout decades ago — shoppers coming out to the strike lines and bringing picketing grocery workers food and water. For the 2022 grocery struggle, public support was more than water and tamales.

This year there was a front-and-center consumer/worker effort as the negotiations went forward. Amardeep Gill, director of the grocery and retail campaign for the Los Angeles Alliance for a New Economy, describes community delegations that showed up at stores to speak with managers, enlisting such groups as the National Council of Jewish Women LA and Clergy and Laity United for Economic Justice. There were also coordinated social media message campaigns.

People patronize local stores out of loyalty, Bentzen said. “’We’re your friends, we’re your neighbors. We’re part of your community.

“We had the public behind us.” As for the grocery chains, “The public is their bread-and-butter,” she said. Ralphs doesn’t want you shopping at Vons, and Vons doesn’t want customers switching to Ralphs — the long-term relationships are important.

Walmart has shaped the terrain of retail and grocery industry practices, establishing a norm of split shifts and uncertain weekly hours.

Flaming is encouraged by the terms of this week’s agreement, which he says sets acceptable pay and hours standards.

The “Hungry at the Table” study zoomed in on Kroger-owned stores.

Walmart dominates the landscape because it’s the largest retailer, but Kroger is the leading grocer.

Walmart has shaped the terrain of retail and grocery industry practices in terms of wages and hours with its employment model, establishing a norm of split shifts and uncertain weekly hours.

The recent union win with the California supermarkets shifts the Walmart employment model, Flaming said. A key piece of the new contract is a measure that guarantees a set number of hours for employees. Under the old model the number of hours employees worked often changed from week to week — which can benefit an employer’s monthly bottom line, but for a worker it can create financial havoc.

A standard scale for hours amounts to a wage increase, Flaming said.

Work standards set by the new agreement benefit not only workers but also are to Kroger’s advantage, critical to the company’s ability to recruit and retain employees.

Walmart has recently publicly discussed shifting more part-time workers to full time — the two are in competition for workers.

“For Kroger to be strongly competitive for workers, there are issues of how much workers get paid per hour and how many hours those workers get,” Flaming said.

As to the reverberations of the strike of 2003-2004, this contract makes up for some of the damage done, Dreier says.

Veteran grocery store worker and union negotiator Bentzen is pleased with the current contract terms that she had a hand in shaping.

“When the public speaks out and says, ‘Hey, I know what you’re doing is wrong’ — yeah. They listen.”

An earlier version of this story erroneously stated that the new UFCW agreement included workers at Stater Bros., Gelson’s Markets and Super A Foods.

L.A.’s Labor Movement Goes Back to the Future With Ambitious ‘People’s Project’