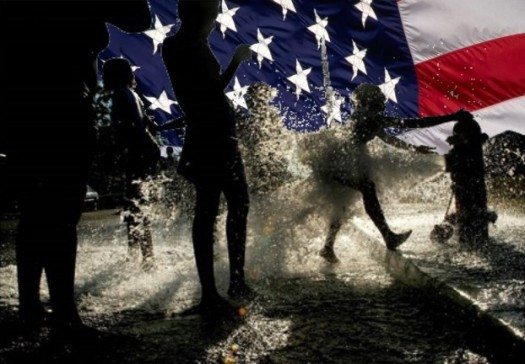 Sunday’s Los Angeles Times carried one of those state-of-the-economy articles indicating that Americans are becoming more realistic in their estimates of their place on the country’s social ladder. Headlined, “Amid slow economic recovery, more Americans identify as ‘lower class,’” Emily Alpert’s feature focused on the latest General Social Survey, a 40-year research project conducted biannually by the National Opinion Research Center (NORC) at the University of Chicago.

The upshot is that fewer low-income people are clinging to the fantasy that they form part of the “middle class” – or even the “working class.” Instead, they are coming to realize that they help comprise the “lower class,” a destination once regarded as an economic leper colony but now accepted as just another fact of life.

As Alpert reports, the GSS revealed that “a record 8.4 percent of Americans put themselves in that category — more than at any other time in the four decades that the question has been asked on the General Social Survey.”

Since the start of the 2009 recession we’ve become acquainted with – almost inured by – metrics showing how high up on the economic pyramid people unreasonably see themselves. The evidence has come in the form of viral videos like Wealth Inequality in America (“There’s a chart I saw recently that I can’t get out of my head . . .”), infographics and opinion polls. Now an increasing number are admitting they are nowhere as near achieving the American Dream as they had imagined they were.

The GSS report was released last March and its 2012 figures are echoed in a Pew Research study that found fully one-third of Americans now identify themselves as “lower-middle or lower class” – a significant jump over a four-year period. These two reports suggest that Americans are developing a more sober understanding of who is upper, middle and lower in society. Alpert breathed life into the NORC survey’s hard statistics with several interviews with people living on the economic edge.

There was Chris Roquemore, a young Long Beach dad who lost his job “at a retail chain” when he sought grieving time following his mother’s death; Susana Garcia of Hawthorne, who quit her second job to spend more time with a daughter – only to lose her house as a result; and San Fernando Valley resident Diana Jimenez, a college-educated woman with a job who, nevertheless, has to live with her mother while she repays her student loans.

All tell stories that have become numbingly commonplace in a country whose top 10 percent control half of its wealth. Since, for the most part, we view ourselves as a nation of individualists, we’ve always tended to feel queasy discussing American society in terms of class – that was something for Europeans to worry about. Even the notion of regarding the middle class as a coherent social group has been questioned by some in labor-history circles, notably Nelson Lichtenstein. Another critic, Rutgers law professor James Gray Pope, wrote in a letter to New Labor Forum:

The middle class isn’t really a class; it’s a status group. Class is about power relations among groups that occupy distinctive positions in a system of production. Working-class people, for example, work for wages . . . Middle-class people are higher than lower-class people and lower than upper-class people.

Whatever. The important point is that, status group or not, most people want to enjoy the security of middle-class life. The heady optimism that has traditionally led many Americans to believe we’re doing better than we actually are – a mirage consensus fed by television shows and movies featuring families who never seem to worry about money or employment – is eroding. Will this erosion produce resignation or activism?

Alpert’s feature may shake many readers into re-assessing their true social status. It certainly jarred a personal memory from my teenage years, when I’d sought confirmation that our family was a paid-up member of America’s comfortable center.

“We’re middle-class, right?” I once asked my mother. After almost dropping her menthol cigarette, she set the record straight.

Even for a kid living in an adolescent’s dream world, the evidence all around me should have made my question unnecessary. Our car, with its orange primer coat showing through, was easily the oldest on the block. We paid cash for nearly everything (no bank account) and in order to get to work my father had to pawn his watch before every payday to buy gas (at 35 cents a gallon!).

But, if the GSS report and Alpert’s interviews are any indications, today more of us are wising up to our true status in the economy.

The current imbalance in America’s income distribution is the worst it’s been in 100 years, according to a recently updated study by U.C. Berkeley economists Emmanuel Saez and Thomas Piketty. A century ago this imbalance ignited tectonic social upheavals that would only settle down a few decades later with the arrival of the New Deal.

The early years of those upheavals brought forth their own statistical reports, surveys and analyses. But this period also produced its own poetry, even if much of it was delivered in courtrooms by America’s dissenters. As Eugene Debs famously told a judge following Debs’ conviction for sedition, “While there is a lower class, I am in it.” Then, Debs’ words were metaphoric; today, for many Americans who find themselves tumbling into economic limbo, they are all too literal.

Related Topics:American Middle Class
Up Next