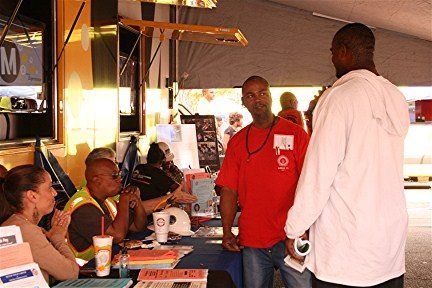 The annual Taste of Soul Festival is renowned for its culinary offerings and cultural richness. This year’s festival, however, had something else on the menu: real hope for job seekers.

The promise of employment comes from the groundbreaking Construction Careers policy passed by the Metropolitan Transit Authority (MTA). Metro became the first transit agency in the country to ensure that projects are completed using skilled workers and creating training opportunities for economically disadvantaged residents. Since then, the Construction Careers coalition – an alliance of worksource centers, youth-engagement and veterans groups, and community groups – has embarked on an ambitious effort to reach out to as many communities as possible about opportunities in the construction industry, in advance of groundbreaking on major projects that will be covered by the policy, including the Crenshaw/LAX line, the Westside Subway Extension and the Regional Connector. This sort of outreach is crucial as South L.A. is one of the communities hardest hit by unemployment. Despite an 11 percent unemployment rate throughout the county, many parts of South L.A. actually face up to 24 percent unemployment.

Among the people who came by the Construction Careers booth was a young, baseball cap-wearing man who was interested in the construction field but who had prior convictions. He was worried that being formerly incarcerated would eliminate his chances of having a good career in the trades, but was able to connect with a group that does mentorship for individuals re-entering the workforce from prison.

An African-American woman in her thirties was pleasantly surprised to learn that the trades were hiring and encouraging women to apply. She was looking for a long-term career and spoke to certain trade unions that also had female representatives there.

Others attended on behalf of family members. Many grandmas and aunties came by our booths seeking to help their nephews, grandsons and other folks in their families. This was the first time many of them had heard of the opportunities on the Crenshaw line and how their family members could actually access that work.

Through our collective efforts, we were able to reach thousands of job seekers in the area, providing people with information on how to join a union and connecting them with the organizations and resources needed to start a successful construction career. This included workshops, videos and scholarships to apprenticeship programs. A Taste of Soul marked the launch of a series of community forums titled “Public Construction 101” (PC 101). Plans are already in the works for forums in Inglewood, Boyle Heights/East L.A. and the San Fernando Valley. For more information regarding future PC 101s, please contact Frank Alvarez at 213-977-9400 x124 or falvarez@laane.org.

The Construction Careers coalition was in full effect at the seventh annual Taste of Soul, a renowned culinary and cultural event in the Crenshaw/South L.A. community. Given all the attention revolving around the soon-to-break-ground Crenshaw/LAX light rail project, what better place to be? Since the buzz first started around the project, job seekers in the Crenshaw community having been asking, “Where do I begin?”, “How can I apply to a construction union?”, “What support is available for me?”