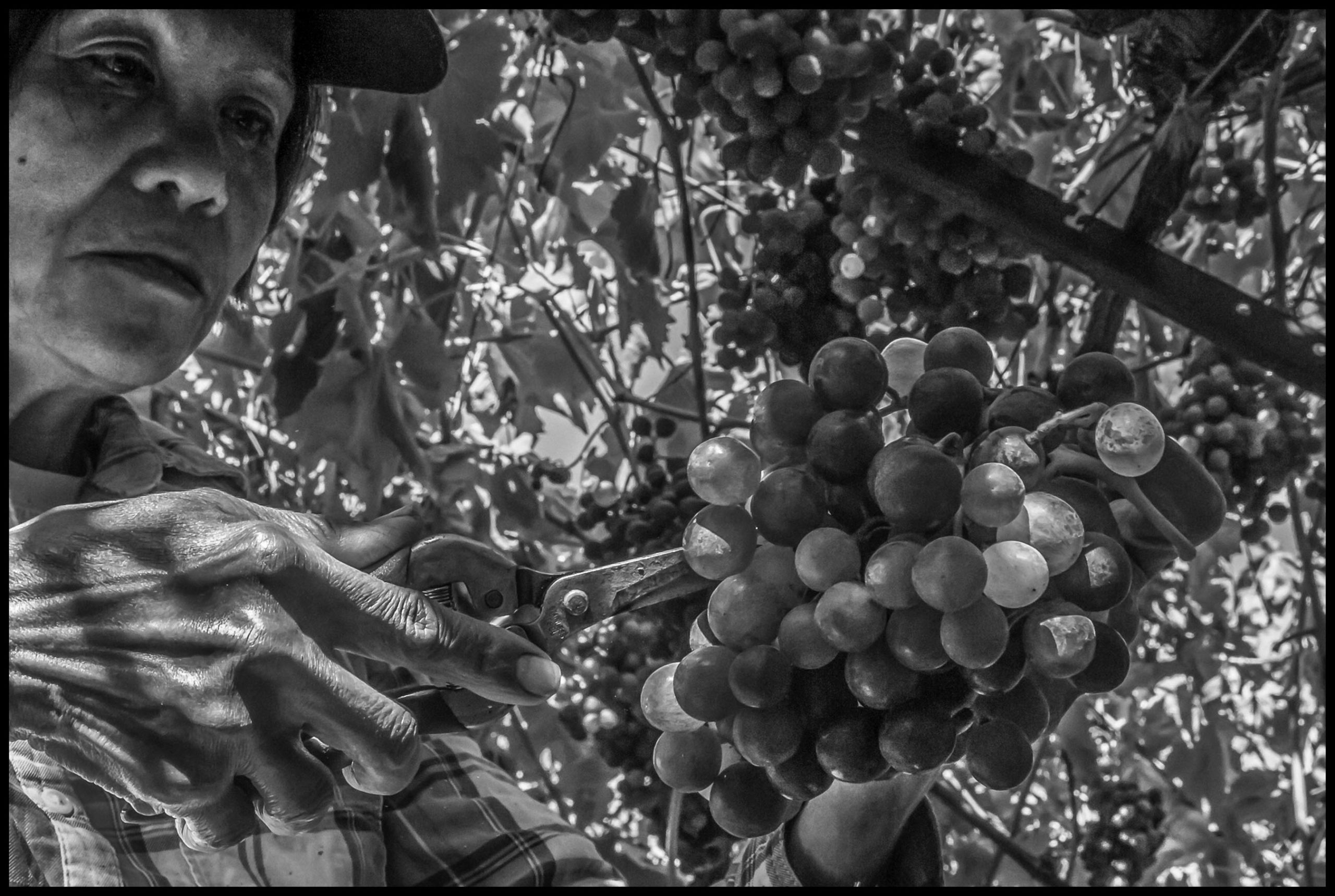 A vineyard in California’s San Joaquin Valley. Annie Domingo came from Laoag, in Ilocos Norte province of the Philippines, 43 years ago.

Family migration has kept the Filipino community in Tulare County alive. The American Community Survey, which is based on the U.S. Census, says there are 7,522 Filipinos in Tulare County — an undercount, according to community organizers at the community of Poplar’s Larry Itliong Resource Center. Today the immigration policy that has made survival possible is under threat from the Trump administration, which has suspended all family visa applications until the end of the year. Such Trump advisers as Stephen Miller openly call for permanently ending family migration.

Just as threatened is the U.S. Census itself. President Trump has ordered an end to the census count three weeks ahead of time, making an accurate count of Filipino and Mexican farmworkers in Poplar and Tulare County much more difficult. “The census is critical to us because it shows our desperate need for family unification, as well as the extent of the poverty here,” explains Mari Pérez-Ruíz, co-founder of the Larry Itliong center.

All photographs by David Bacon

Before 1965, when family reunification became the basis of U.S. immigration policy, growers’ need for labor drove migration from the Philippines. Nearly a century ago brown hands planted the first table grape seedlings in the alluvial soil of the San Joaquin Valley. In Tulare and Kern counties, the hands of the first Filipino migrants cultivated and pruned the vines of the landowners — Croatians like Marin Caratan and Marko Zaninovich, and the Italian Joe Di Giorgio. When summer came, Filipino hands picked their grapes.

From those early years, that grape harvest has flourished. Last year’s record crop of table grapes, worth $2.14 billion, was grown on 83,000 California acres, almost a third of it in Tulare County. Yet little of that wealth reaches the people who pick the fruit. The American Community Survey documents the per capita income of a Tulare County resident as $20,421 per year, compared to a U.S. average of $32,621. More than a fifth of Tulare’s people live below the poverty line. The survey shows that over 32,000 Tulare County residents are farmworkers; according to the U.S. Department of Labor the average annual income of a farmworker is between $17,500 and $20,000.

Last year’s record table grape crop was worth $2.14 billion, yet little of that wealth reaches the people who pick the fruit.

Today most families working among the grapevines are Mexican. But in some fields you still hear people speaking quietly in Ilocano as they snip the vines, prune out the bad grapes and carefully lay each bunch in a box. They are the fourth and fifth generation of Filipinos making a living in table grapes.

This August one crew picking in a vineyard a few miles outside of Poplar included townspeople from Laoag, Ilocos Norte’s capital city. This is Annie Domingo’s 43rd year working the grape harvest. She arrived from the Philippines in 1977 and went to work at 15. Picking next to her was Adelina Asuncion, who also came from Laoag that same year. 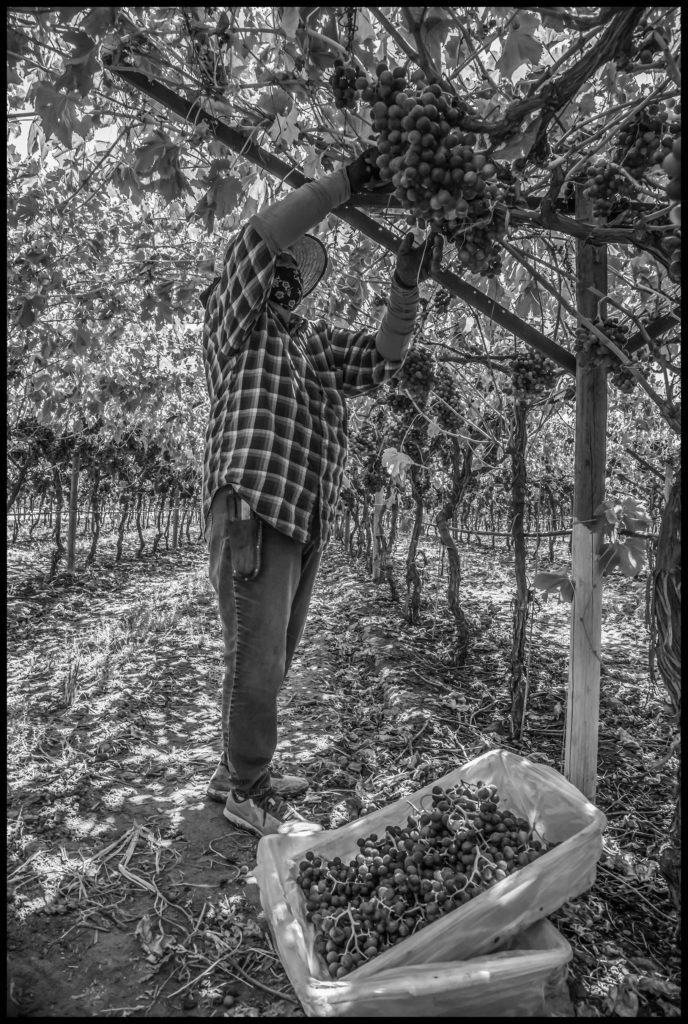 Adelina Asuncion arrived from Laoag in 1977. Robinson Cadiz, another immigrant from Laoag, picks bad grapes out of the bunch. Victor Tabino takes bunches from the tubs, bags and packs them into boxes.

Poverty was the condition of Filipinos from the beginning. The first generation of manongs (a term of respect for older Filipino men) arrived from the Philippines in the 1920s and found a place to live in growers’ labor camps. By the 1940s Di Giorgio alone ran three Sierra Vista camps in Tulare County. His barracks housed 450 men, organized by the towns they came from, mostly in the provinces of Ilocos Norte and Bohol.

The Caratans and Di Giorgios needed Filipinos in their vineyards, but they wanted only workers who didn’t bring families with them. When the manongs were recruited in the 1920s, only men could leave the islands to work in Hawaii and on the Pacific Coast. After crossing the Pacific, they found that anti-miscegenation laws prohibited them from marrying non-Filipinas. The labor camps held only men, who traveled in work crews from ranch to ranch in California, or up to Alaska’s salmon canneries.

The historic 1965 grape strike basically ended the labor camp system in California, and brought huge changes for Filipinos. It made them town residents and helped end their isolation.

Mexican migrants fared little better. The two decades after World War II were the years of the bracero program. Hundreds of thousands of Mexican men were brought to the U.S. They too lived in labor camps, and they were sent back across the border once their seasonal labor was done.

It took a civil rights movement and the Delano grape strike to end this system. While Freedom Riders were breaking the back of segregation in the South, Chicano and Filipino activists tore down the immigration barriers against families. In 1965 the Immigration and Nationality Act finally made it possible for people living in the U.S. to petition for visas for family members. “My mom and dad came here straight from the Philippines, because my grandparents petitioned for them,” Poplar resident Gina Lacambacal remembers. “Then I was born here.”

The 1965 law had a huge impact, far beyond Tulare County. Today the number of Filipinos in California has grown to 1,651,933, and more than 4 million nationally. In 1930 and 1940 the census counted just over 45,000 Filipinos living in the U.S. In those decades, while growers could recruit workers, a quota system barred legal migration of families from non-European countries.

“Towns like Poplar are still small, but they are where the Filipino community started, and today people still come to the U.S. through them, ” explains Lillian Galedo, former director of Filipino Advocates for Justice in Oakland. “If that first generation of Filipino farmworkers in places like Poplar hadn’t fought to survive, we would never have won the law and our community wouldn’t be here today.” 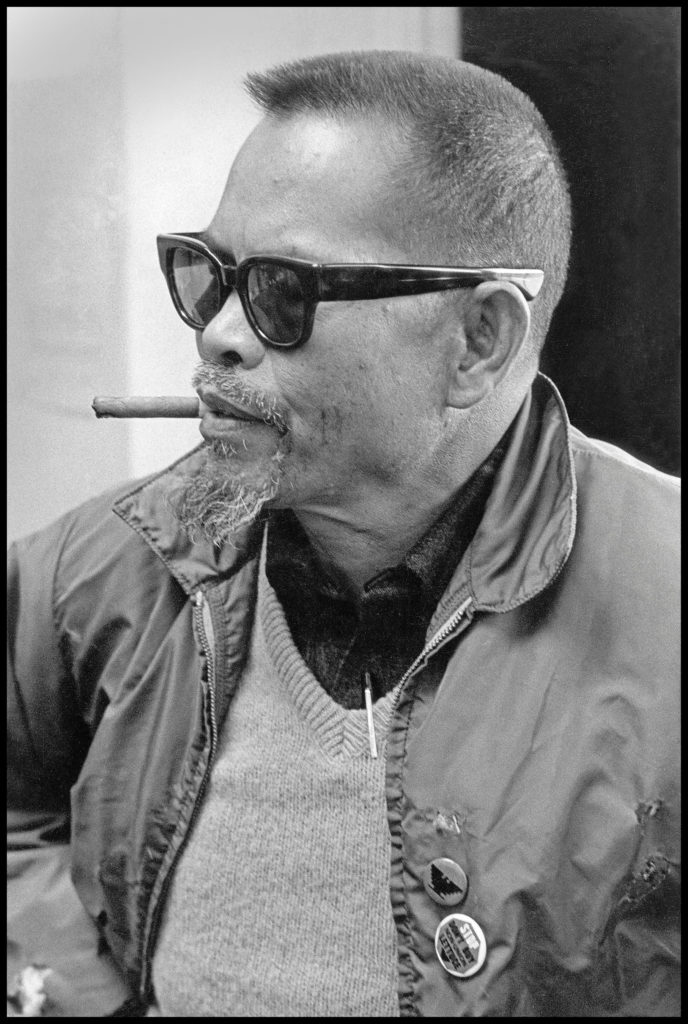 Larry Itliong, for whom the Poplar center is named, was one of the strongest advocates for changing the immigration system. After coming from the Philippines in the 1930s, Itliong began organizing farmworkers. He believed unions would give them the political and economic power to end the omnipresent discrimination and segregation facing Filipinos, Mexicans and African Americans, especially in rural California.

In 1965 Itliong led a strike in the Coachella Valley. When the grape harvest reached Delano, Filipino workers demanded the same raise. The traditional way Filipino crews went on strike was not with picket lines but with a sit-in at the camp. They just didn’t go to work.  In the five years of the grape strike that followed the United Farm Workers was born.

“The census clearly shows Filipinos in rural counties are very poor. Without this evidence, it is much harder to advocate for social change that can help them.”

Filipinos paid a high price. The growers evicted them from the camps — a heavy blow. “There was no home to go back to,” remembers Doug Adair, a young activist then living in the Linnell Labor Camp in Visalia. “The camp was the home.” United Farm Workers co-founder Dolores Huerta was shocked at the ensuing violence. “Some were beaten up by growers who would shut off the gas and lights and water,” she recalled.

The 1965 grape strike basically ended the camp system in California, as growers eventually closed almost all of them. According to the National Park Service, which preserves sites from the historic strike, Di Giorgio shut the Sierra Vista camps in retaliation for “organizing activities of the United Farm Workers Union.” 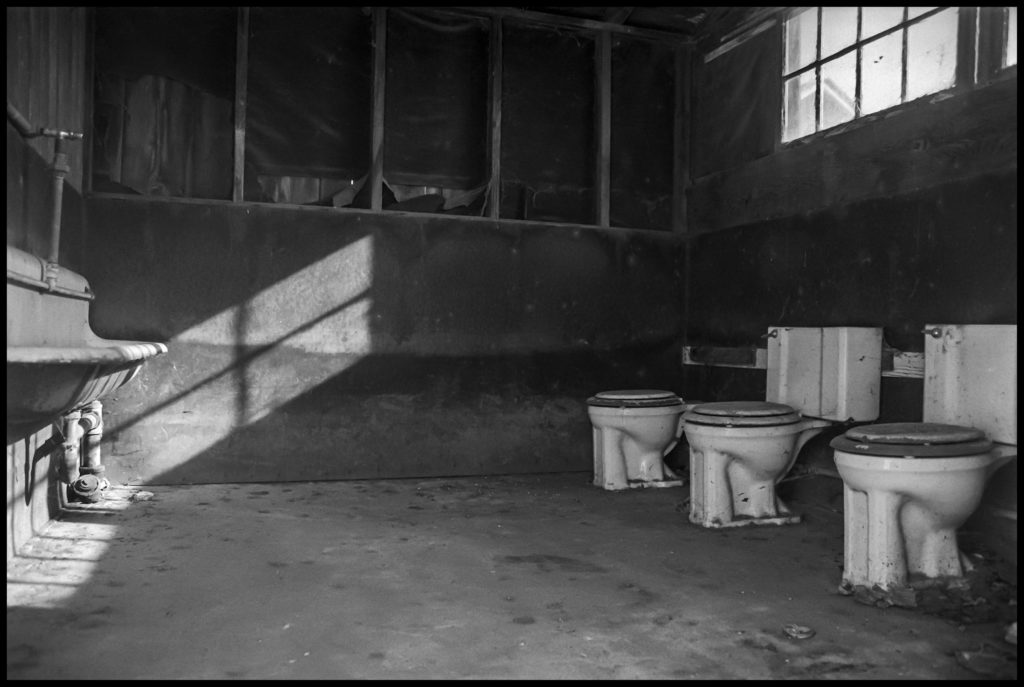 An abandoned labor camp in the delta.

Leaving the camps brought huge changes for the Filipinos. It made them town residents and helped end their isolation. Itliong himself ran for Delano City Council two years after the strike started, calling for raising farm wages.

At the time the immigration law changed, “The manongs were all supporting nephews and nieces back in the Philippines,” Adair remembers. “Finally the door opened so they could come.”  Still, family migration still hasn’t been easy. It took Gina Lacambacal’s older brothers more than 20 years to get their visas because of the system’s long backlogs.  Another brother had to stay unmarried for years in the Philippines, since married children lose their visa preference. He could only marry his wife once he arrived in the U.S.

Nevertheless, Filipino families grew in Tulare County. When she was growing up, Lacambacal says, people in Poplar rented homes from the local pawnshop owner. “Our house wasn’t very well built. It was ancient, but you had a roof over your head. That’s all that mattered.”

“We cannot afford to be invisible. Today the census matters. Our survival depends on it.”

“We moved into this house in 2004,” Lacambacal remembers. “Self-Help provided the materials and it was up to us to put it up. Sometimes if we couldn’t work on our own house people would come and help. All the houses in this neighborhood were built with Self-Help.”

Self-Help, and the Farm Labor Committee from which it came, relied on census data demonstrating the extent of poverty to show the need for funding the loans. The census today shows the impact of home ownership for Tulare County residents. Rent takes more than a third of the income of almost half the county’s 56,000 renters. When people can buy homes, however, far fewer wind up paying that much of their income on mortgages. Reginaldo Lacambacal and his wife Gloria came from the Philippines 20 years ago, after his father petitioned for him. They’ve worked in the fields all those years. During the coronavirus crisis Reginaldo wears a mask around his neck. The Lacambacal family is a family of Poplar Filipinos. Giyahna fixes the hair of Jenika Gwen while she eats grapes just brought back from work.

Today three generations live in the house on Walker Road — the legacy of all the work, the strikes and evictions, and the long journey from the Philippines. To ensure California students value this history, Assemblymember Rob Bonta (D-Alameda), California’s first Filipino legislator, wrote a bill in 2013 putting Filipino American history into school curricula. A second bill created an annual statewide Larry Itliong Day.

Four blocks over from Walker Road, the census enumerators meet in the Itliong Center’s conference room. Every day they go out to try to finish the count before the new deadline. While they’re out, the center’s two organizers, Mari Pérez-Ruíz and Arturo Rodriguez, box up food for hungry families who come, these days, from towns 30 and 40 miles away.

“The census is important to us because it shows the way our community has benefited from the family unification principle of the 1965 law, ” Galedo says. “Yet the census clearly shows Filipinos in rural counties like Tulare still are very poor. Without this evidence, it is much harder to advocate for social change that can help them.”

“We cannot afford to be invisible,” Pérez-Ruíz emphasizes. “Today the census matters. Our survival depends on it.” Living in the Shadow of
Arizona’s Border Wall