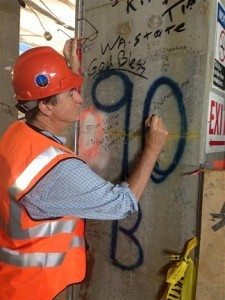 On a side street that runs alongside the World Trade Center, two bronze bas-relief murals depicting rescue scenes from 9/11 are affixed to a wall facing the construction site. One reads, “Dedicated to Those Who Fell and Those Who Carry On.” The other admonishes us to “Never Forget.”

When I had a chance to write my own name of the 90th floor of the new tower going up on the site of the two that were destroyed, I wrote “Remember,” underneath my name. But aside from keeping the sacrifice and bravery of those who died on 9/11 in our thoughts, what was the content of the memory that I was supposed to protect? What are those memories supposed to tell me about how to live now, how to act personally and politically in this world?

To some extent, the struggle over what would replace Ground Zero has been an argument about memory and its uses. Most historians or anthropologists who have studied the dynamics of commemorative rituals and memorial building point to the contemporary concerns that drive them and the ideological functions they perform. When traumas take place that deeply impact individuals or even the “psyche” of a nation, there are inevitable struggles over the “right way” to remember.

Elizabeth Greenspan, in her new book  Battle For Ground Zero: Inside the Political Struggle to Rebuild the World Trade Center – outlines the intense fights over what the content of the memorial museum would be at the World Trade Center site. She quotes Michael Shulan, the creative director of the museum who said that 9/11 “…can mean a clash of cultures, it can be grief, it can be confusion, it could be betrayal, it could be our justification for military power, it can be all of those things. And in fact I think it is all of those things.”

While there have been universal calls to “remember,” in the psychoanalytic tradition remembering can function as a way of forgetting. In Sigmund Freud’s essay, “Remembering, Repeating and Working-Through,” he writes that …”the patient does not remember anything he has forgotten and repressed, but acts it out. He reproduces it not as a memory but as an action; he repeats it.” According to this line of thought, certain traumas and desires can only be remembered in a distorted way, or acted out as symptoms.

Leaving aside whether it is appropriate to apply the dynamics of individual psychology to society at large – Freud did this quite often in his writings about war and religion  – I think that what we remember and what we forget both involve  psychological and social processes. If commemorative rituals are a way of repeating a trauma, they can become political forces in their own right.

So the politics of this supposed apolitical space was largely directed at the social and psychological process of constructing a memory, sanctioning particular stories from 9/11, and perhaps unavoidably flattening our understanding of these horrific events.

Ground Zero was literally contested symbolic terrain. Greenspan outlines some of the questions that needed to be worked through, the compromises that grew out of conflicting desires and beliefs.

Would the new World Trade Center building – designed to suggest the Statue of Liberty — invite another attack? Was rebuilding 10 million square feet of office space that was lost on 9/11 acquiescence to greed and an affront to the dead? Should the names of the dead be placed above ground or below, assembled in alphabetical order or through groups of affinity? Should the 9/11 museum celebrate the worldwide struggle for freedom or stick to what happened with stories of bravery and loss?

When the political and Port Authority officials did get around to asking “the people” what they felt about the five options for the land they could choose from, chaos ensued. Five thousand people filled the Jacob Javits Convention Center to examine the master plans and vote their choices. All five plans were soundly rejected. Clearly, there was no unanimity on what stories should be told, what emotions the structures should evoke or what the historical context would be to explain what took place.

Without the contextualizing discipline of history as a central component of what we remember, we become, as writer Fintan O’Toole observes about Ireland’s memorializing tradition, tourists of our own landscapes, mere audiences of our own culture.

Since I was recently in New York working on video interviews of the workers who were building the new tower, I couldn’t help think of other enduring images from earlier events at the World Trade Center, that have shaped our understanding of the past.

While the workers I spoke to were thoughtful, engaging and open-minded, it was a series of events at the original World Trade Center in May, 1970 that helped solidify a darker view of what the “working class” was all about during the tumultuous late 1960s and early 1970s.

When Wall Street employees and construction workers from the World Trade Center attacked anti-war protestors on May 8,1970, in the so-called “hard hat riot,” the media jumped on the conflict as a symbol of an unbridgeable gulf between “elite” war protestors and “reactionary hard-hats.”

The workers as reactionary signifiers supplied journalists with a theme for countless condescending stories and columns about “authoritarian” and “macho” white males. What was left largely unexplained was why these “conservative” workers engaged in the biggest strike wave in the 1970s since 1946. Almost two and a half million blue-collar workers went on strike in 1970 alone.

In her new book, Hardhats, Hippies, and Hawks, sociologist Penny Lewis outlines a counter-history of the complex political trajectory of working-class people at the time. They were, according to Lewis, moving left, right and center all at once. This “crisis in public representation,” Lewis points out, obscured the fact that most of the polling at the time showed workers were less supportive of the war than were then non-working class whites. Enduring half-truths die hard.

The sociologists Richard Sennett and Jonathan Cobb observed at the time that the hard hat, racist and superpatriot projections were a way of dehumanizing people by constructing a useful political symbol out of complex lives. These workers became “a thing, with an empty head hidden beneath, a part of a mass over which the ‘educated’ or ‘enlightened’ person towers,” they wrote.

This imagery was repeated endlessly – the 1970 film Joe presented the crypto-Fascist rage of a white worker played by Peter Boyle, followed by Archie Bunker and All In The Family in early 1971. Author Barbara Ehrenreich argues that much of the cinematic and television imagery of the time was a projection of “middle-class anxiety and prejudice,” that needed a “working class more suited to their mood: dumb, reactionary and bigoted.”

What did all of this skewed pop cultural imagery mean politically? Richard Nixon thought he knew. The workers, Nixon told his aide Bob Haldeman, “were with us when some of the elitist crowd were running from us. Thank God for the hard hats!” What we remember, and how we remember it, can make us politically sick.

Greenspan concludes at the end of her book that the rebuilding of the trade center was a story of dysfunction and messiness. She adds that it was also a story of public expression and compromise. “It was a story of how things worked, and how things didn’t work, at the turn of twenty-first century America.”

I think that’s about right.

(Kelly Candaele is a writer, filmmaker, teacher and has served as a trustee for the Los Angeles Community College District.)

Related Topics:9/11World Trade Center
Up Next