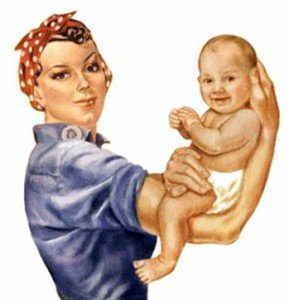 If 2012 was the year of the woman, 2013 is the year of the working mom. And that’s why I’m headed to California. Last week, House Minority Leader Nancy Pelosi along with Congresswomen Rosa DeLauro, Doris Matsui and others announced a new economic agenda for women and families, built on three key pillars for driving women’s economic advancement: 1) equal pay for equal work, 2) work-family balance, including paid sick leave and a livable minimum wage, and 3) access to quality, affordable child care.

As many have noted, these priorities are not new ideas. Women have been advocating for decades for these policies, because they work, they are fair and they are critical to the success of our nation. What is new is the momentum behind putting these practical solutions to work so that we can kick-start an economy that continues to languish and restore the American promise for our children — that their futures should be brighter, not dimmer, than the generation before.

Since the beginning of his presidency, President Obama has championed equal pay for women, and Democrats in Congress have repeatedly proposed long-overdue updates to the long-stagnant minimum wage. Yet one agenda item — child care — has received increased attention as of late, from the President calling for increased investment in early learning and care in this year’s State of the Union address to parents and providers working together in the states to address severe shortages in child care.

They are paying close attention to this moment, where the working mothers’ mantra is finally in the media and very much on the minds of men too: without affordable, accessible child care, gains in workplace equity won’t be realized by moms who can’t return to work in the first place. That’s why we’re proud that leaders like Hillary Clinton, who has newly lent backing to the “Too Small to Fail” initiative, and the Los Angeles-based attorney Sandra Fluke, who herself made waves in 2012 as a women’s rights activist, have raised their voices in support of increased access to early childhood learning and care.

Unfortunately, a lot of the action on child care falls to the states, which have suffered deficits and budget cuts in the wake of the recession.

That’s why I single out and have my sights set on California because, as our most populous state, it should be leading the way — this, after all, is where a strong coalition of labor and women’s groups helped pass the first-of-its-kind paid family leave bill in 2002. But as 27 governors used their 2013 State of the State speeches to call for increased investment, California slides backwards. What’s more, California, unlike other states, now enjoys a multi-billion dollar surplus, not a deficit — yet in the most recent budget, a proposal to reinvest $257 million in child care was sharply curtailed as the final deal reached Governor Brown’s desk. .

In the last four years, Sacramento has cut more than a billion dollars from early education, getting failing marks in nationwide school readiness studies and ranking 41st in overall children’s health and wellness. And of the two million families in our state with 4.2 million children requiring child care, hundreds of thousands of parents find it difficult or impossible to access good options for care.

In California and nationwide, our youngest citizens’ futures must be at the top of our agenda. This is not the time to be timid, or deal with it in K-12 proposals and politicking. Later is too late; the research keeps mounting about where we need to put our money and why.

Common sense is backed up by the science: A substantial body of research shows that 90 percent of brain development occurs in the first five years of a child’s life. The key to education reform is thus access to high quality child care and early learning, to improve school readiness, hike college enrollment, and turn out successful members of society. It’s our child care providers — our children’s very first teachers — who give kids the critical tools and foundation they need to become our next entrepreneurs, innovators, and leaders.

The benefits don’t just accrue to our children, however: Nobel-prize winning economist Dr. James Heckman evaluated the cost-effectiveness of a variety of state and local tax incentives and concluded that investing in young children is America’s best economic stimulus package. (We’re talking dividends up to $17 per every dollar spent.)

Business gets this. The reputable Bay Area Council which represents the likes of large California employers like Kaiser, AT&T, PG&E have been unusually out front on the importance of early learning. They seek future innovators and talent, look forward to stable workplaces and a 21st century workforce with the skills and smarts to grow and compete in the global economy.

That is why parents groups, child care providers, elected officials, educators, clergy, labor unions and other advocates for immigrants and communities of color are speaking out to transform our broken system. Raising California Together united as a coalition this year to make sure our children are our top priority, not an afterthought. We are determined to make California a national leader again when it comes to recognizing the unparalleled value of investing in early learning opportunities and making sure our child care providers have a voice in Sacramento to negotiate better standards across the board.

We stand behind Representative Pelosi and the other House Democratic women who have put forward an agenda that’s not only good for women but essential for our economy and, most importantly, our children.

The Golden State can and must do better, the success of working moms and the future of our littlest citizens — in California and across the nation — depend on it.

(Mary Kay Henry is President of the Service Employees International Union. Her post first appeared on Huffington Post and is republished with permission.)

‘Today I Went on Strike’ — A Strike Fund Appeal