August Diehl as a 20-something Karl Marx. (All Photos by Kris Dewitte.)

Among the best films about revolutionaries are 2000’s Lumumba, which documented the life of the Congo’s murdered independence leader, and last year’s I Am Not Your Negro, a brilliant reintroduction to James Baldwin’s revolutionary writing. Now the director of those acclaimed films, Haitian Raoul Peck, has once again trained his lens on revolution, but this time in a largely unexpectedly way.

While Peck’s past work has been marked by intensity and grit, The Young Karl Marx instead relies less on invention and on more conventional tropes. That approach is not necessarily a bad thing. It allows the filmmaker to make accessible the seemingly daunting challenge of documenting the young life of a philosopher/writer whose work takes place mostly in his head and on paper. 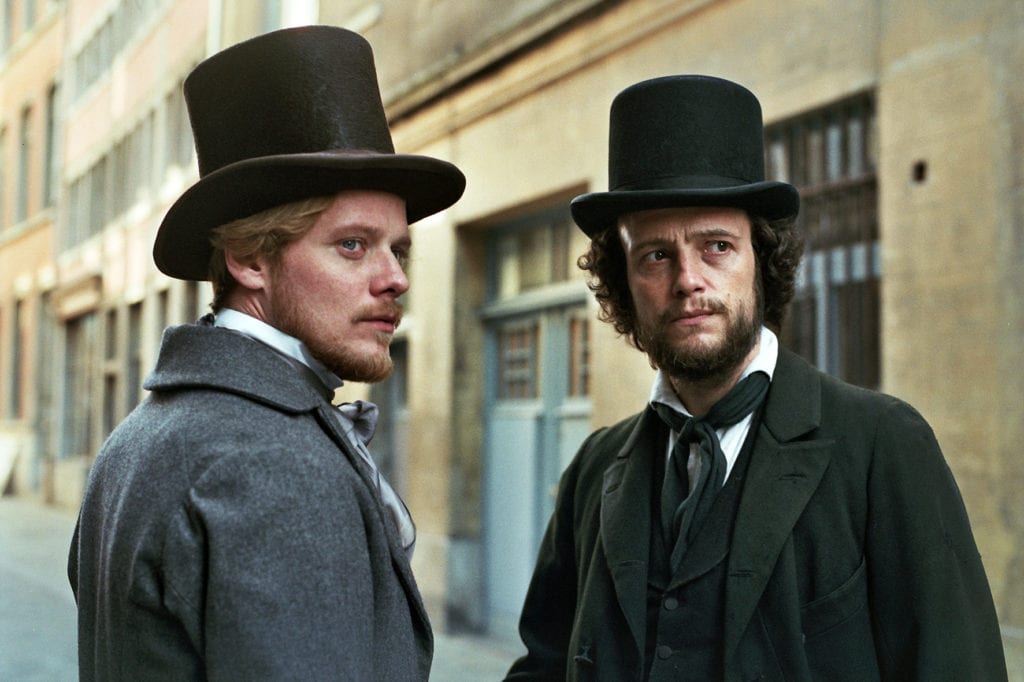 Written by Peck and Pascal Bonitzer, the film begins in the mid 1800s, when Europe’s Industrial Revolution has underscored the economic disparity between the ruling class and the working poor, or proletariat. This inequality has spawned a slew of young writers and thinkers who are circling philosophically, individually and collectively, what they hope will become a better society. Among them are journalist Marx (August Diehl) and his wife (Vicky Krieps), who live a meager existence–escaping creditors and cops, sleeping in and screwing when not discussing socioeconomic theory. The couple is soon exiled from Germany to France, where they meet Friedrich Engels (Stefan Konarske), a factory owner’s son who has been the first to study and write about the plight of the working class. An instant bromance Between Marx and Engels ensues.

Most of the film follows the duo as they argue and pontificate their way through Europe, honing their philosophy until it can all be memorialized in 1848’s The Communist Manifesto. Diehl has incredible charisma and his Marx is part revolutionary and part young Mick Jagger. With Konarske’s Engels as his more grounded Keith Richards, they aren’t quite enfants terribles, but they do shake things up, quickly rising as leaders of those trying to understand the world around them. And what a glorious world that is. Production designers Benoit Barouh and Christophe Couzon have fashioned a stunning representation of 19th-century Europe. What emerges is a costume buddy film, as if Merchant Ivory produced Butch Cassidy and the Sundance Kid.

Ultimately, though, viewers’ personal views of Marx, and their political views in general, will probably decide whether they enjoy the film. By focusing on the genesis of Marx’s ideological oeuvre, Peck avoids having to deal with the man’s ultimate mixed legacy. Regardless, some will undoubtedly find the filmic fuss over Marx misplaced. But for many, The Young Karl Marx will be a fulfilling view of a time when young idealists were trying to make sense of the world in a far more robust way than the current political spewing of modern-day television pundits.