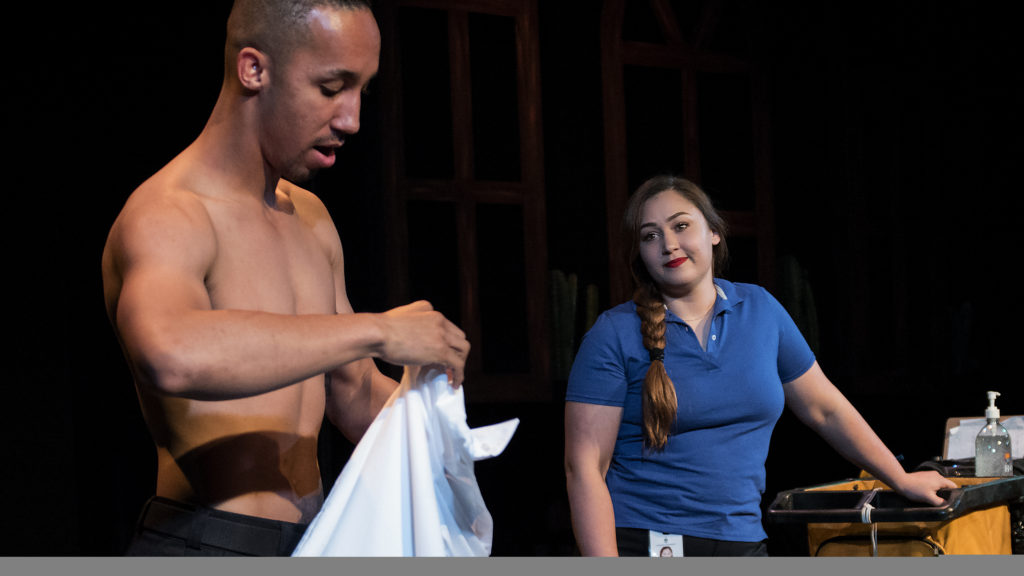 In Yerma in the Desert, the desert is less an external place than the state of mind of the title character. Written by Oliver Mayer, the play is inspired by Federico Garcia Lorca’s 1934 classic Yerma, whose central character, the wife of a shepherd, is childless and unhappy.

Mayer’s one-act is set in contemporary Los Angeles where Yerma (Jean Murillo) labors as part of a janitorial team at an elite university. She’s an amiable pleasant-tempered woman who works hard — prompting the scorn of her fellow workers, put off by her willingness to undertake double shifts and good-naturedly scrub toilets. Yerma’s husband Juan (Anthony Bryce Graham) also looks down on her occupation; he’s an ambitious man who has just joined the police force, a move he regards as upwardly mobile and empowering. While he values their marriage, their intimacy is passionless and he doesn’t want children. Yerma, however, is desperate for a baby, and while she isn’t looking to have an affair, she does have this old friend Victor (Paul Tully ) to whom she’s uneasily drawn. Running in tandem with the main story is a subplot in which Yerma’s boss Trini (Brenda Banna) schemes to wreak revenge on a snooty student who has disparaged one of her workers. Her plan is to plant dope in the student’s dorm room, then tip off the authorities to have him expelled. The take-no-prisoners Trini has also taken Yerma under her wing, hooking her up with the university’s fertility expert, Professor Stallworthy (Spencer Weitzel), in order to bring her wish for a child to fruition, with or without her husband’s participation.

Written specifically for this company, Urban Theatre Movement, Mayer’s soundly constructed and fluid script has considerable dramatic potential. But Lorca’s Yerma — a barren woman in a pastoral community where female personhood can be attained only by having kids — doesn’t translate all that aptly to our modern era. Inconsistencies in Juan’s character are also problematic; he’s possessive of Yerma and wants to stay married to her but doesn’t want to touch her or be touched. (He’s always been this way, he tells her.) Again, this story element plays fittingly against the backdrop of a primitive patriarchal culture, with its strict code of honor and its emphasis on appearances, but it’s harder to buy in the here and now. (The most likely explanation for this character’s disparities is that he’s in in the closet, but that’s not suggested in the script or developed otherwise in the production.)

While these issues might have been ironed out in performance, sadly, that would have required more depth and skill than this ensemble displays. Co-directed by Edgar Landa and Marlene Forte on a dreary set (by Sarah Steinman), the performances for the most part come off as non-professional. Graham, as the conflicted controlling Juan, has the most interesting role, but there’s no real life to this performer’s delivery — he’s in over his head. Murillo’s Yerma exudes an appealing aura, but her desperation is more presentational than palpable; there are no layers here, nor are there among most of the supporting players. The exceptions are a crisp and lively Marilyn Fitorina as Yerma’s reluctantly pregnant co-worker, and Weitzel, whose patronizing man of science is credible and solid.

Mayer’s inclusion of class conflict in his drama is its most intriguing and significant aspect. In the program notes, he writes of wanting to highlight the interior lives of working people — like the maintenance people in this story — whose humanity is often barely recognized by everyone else; they’re perceived as part of the supporting apparatus of our lives, with no independent lives of their own. This effort to illuminate their perspective is a vital and all-too-rare dramatic goal, and with better direction and a more seasoned ensemble it easily could be accomplished with more power and grace. I do hope it is, down the line.