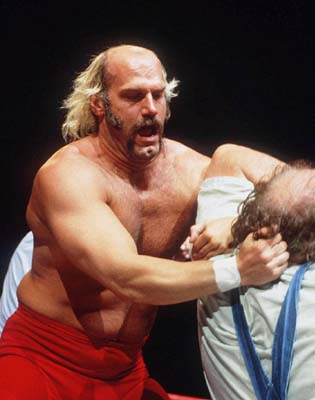 In one instance, wrestler and future Minnesota governor Jesse “The Body” Ventura attempted to organize a union, though he got little traction among fellow wrestlers. It was later revealed that Hulk Hogan had ratted him out to Vince McMahon. Ventura later won a significant lawsuit against his employers.

More recently, the Masked Man writes, “In 2008, three wrestlers — Raven, Chris Kanyon, and Mike Sanders — sued WWE for ‘cheating them out of health care and other benefits’ and insisted that the ‘independent contractor’ designation was a sham since WWE had ‘virtually complete dominion and control over its wrestlers.’”

The sham “independent contractor” designation is a serious issue for workers in more than a few industries. It has been a major source of controversy, policy debate, and legal wrangling in port trucking over the past few years, where a blue-green alliance has sought to revamp the industry to the benefit of the environment and workers.

Misclassifying their workers as independent contractors rather than employees allows companies to avoid responsibilities they would have toward employees, such as better working conditions, workers’ compensation, health care, and employer taxes. In avoiding these, risk is shifted onto the individual. Workers’ comp provides a stark case. Self-insuring without workers’ comp is often either more expensive for workers in dangerous industries or unaffordable for low-wage workers like port truck drivers. Thus, when hit with an injury that takes them off the job, an independent contractor not only faces medical bills, but a complete loss of income. One mistimed “death valley driver” and a wrestler might not be able to put food on the table.

In response to this problem, the California legislature passed SB 549 this year, just signed by Governor Jerry Brown, prohibiting willful misclassification by employers. Hopefully, other states will follow California’s lead on this important step, but the real test will be in enforcement.

Keep your eyes open, and you’ll see all sorts of instances these days of big corporations consolidating the benefits of business for themselves, while shifting risk onto workers and consumers at the same time.

You can also tune into Raw to watch some misclassified workers in a dangerous entertainment industry act out a scripted labor uprising, while they could certainly use the real thing behind the scenes.

My Dog Sitter Is on Fire